‘Ghostbusters’ Green Ghost Slimer is Actually a John Belushi Tribute! Can You Tell? 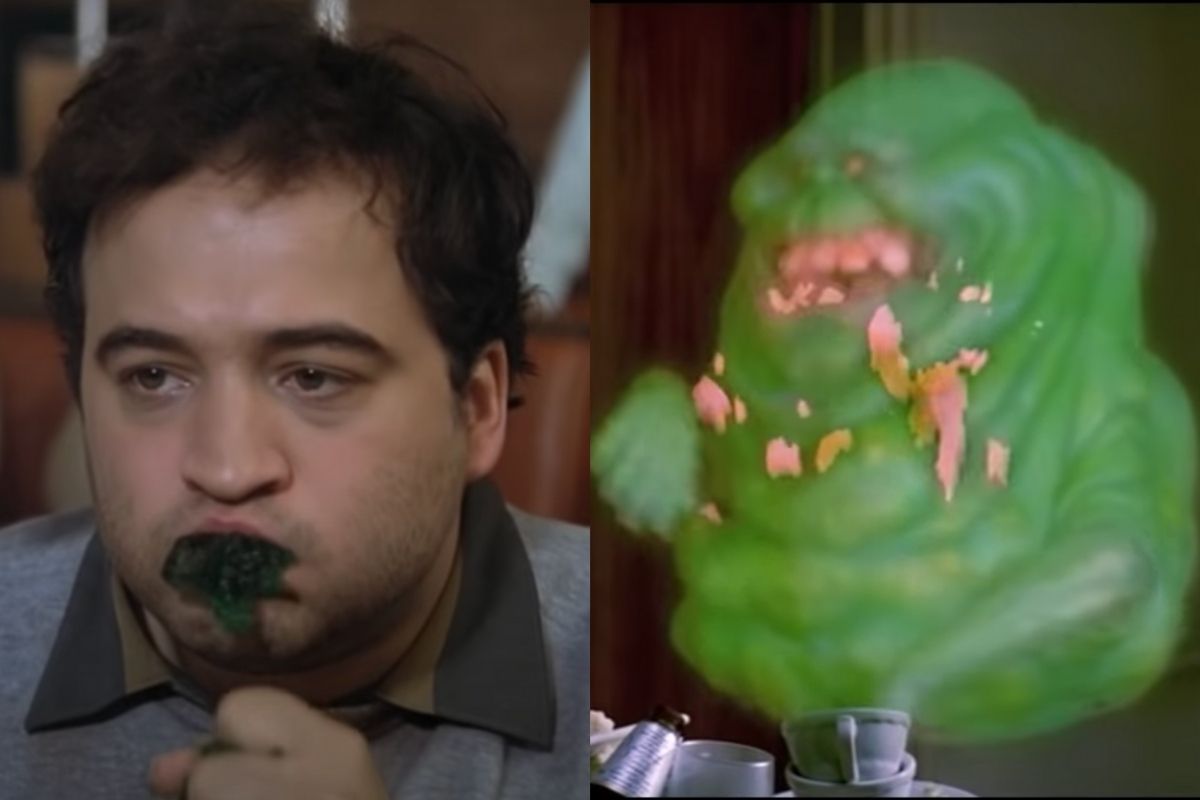 Following the success of The Blues Brothers, Dan Aykroyd began drafting Ghostbusters. Inspired by his own fascination with the supernatural, Aykroyd imagined starring in this passion project alongside his best friend/frequent collaborator John Belushi. (SNL alum Eddie Murphy was Aykroyd’s original choice to play the third Ghostbuster.) But after the Animal House star’s sudden death in March of that year, the film was re-imagined, and re-written with Harold Ramis into the New York City adventure that’s delighted audiences for decades. But Belushi’s spirit still made it into the final cut. Literally.

The Writing of ‘Ghostbusters’

After John Belushi died and Eddie Murphy declined the script, it was clear that Ghostbusters would need a serious revamping to become commercially viable. Dan Aykroyd, Harold Ramis, and director Ivan Reitman holed up at Aykroyd’s home in Martha’s Vineyard and took another crack at the screenplay. Aykroyd supplied the big-picture ideas, preoccupied with paranormal jargon, while Ramis refined the film’s dialogue and pace. Bill Murray had already signed on to play Peter Venkman, and Ramis — who had written for Murray in 1981’s Stripes — was confident in his ability to tailor lines to the actor’s sardonic voice.

Venkman was envisioned as the mouthpiece of the group, with Ramis’ Egon Spengler as the brains and Aykroyd’s Ray Stantz as the heart. It was the tried-and-true Wizard of Oz formula that finally birthed the cool Ghostbusters trio: cruising around in the Ecto-1 and brandishing proton packs with heroic, deadpan power. But there was another identity floating around in the creative mix: the greedy green ghost Slimer, who haunts the Sedgewick Hotel and was inspired by their dear friend John Belushi.

The Creation of Slimer

“That was the most annoying horrendous experience I’ve ever had working with art directors, producers, and directors, ever. In the beginning they asked for a ‘smile with arms’ but before I knew it, it was a goddamn bleeding nightmare… ’give him 13% more pathos, put ears on him, take his ears off, less pathos, more pathos, make his nose bigger, now his nose is too big, make his nose smaller…’ Are you kidding? ‘Make him more cartoony, make him less cartoony’. I almost fucking severed my own head during that process.”

Steve Johnson is a noted special effects master and has worked on such pulpy classics as A Nightmare on Elm Street 4: The Dream Master, Fright Night, Poltergeist II, and An American Werewolf in London. (Johnson’s memoir Rubberhead recounts his unusual industry exploits.) Suffice to say, Johnson had a vision. But intense editorializing from the Ghostbusters team continuously demanded more from the goblin-like specter, then known as the on-set moniker “Onion Head Ghost.”

As Johnson tells it, Harold Ramis and Dan Aykroyd — at the last minute — decided to honor John Belushi through Slimer. Johnson says he got word just a day before the finished Slimer was due. In order to make that tight deadline, what Johnson did next authentically embodied Belushi’s hard-core party-boy spirit: “I pulled out a stack of headshots of John Belushi, poured a gram of cocaine on it and started chopping lines up,” Johnson told Bloody Disgusting. Hey, it was the ’80s!

Real artistic breakthroughs can often feel spiritual. And Steve Johnson’s frenzied, cocaine-fueled state is no exception. Johnson describes feeling like John Belushi’s essence was really in the room that night: an apparition as the answer to Johnson’s desperate professional predicament. And just like that, the goofy, chubby, oozy green ghost that we all remember was risen. Johnson got the job done, and in the end, Slimer was part-Bluto, part-glutton, and part-cocaine binge: 100% the ghost of John Belushi. A cameo from beyond the grave.

But I do wonder how it felt when the ghostly presence — and the drugs — finally left Steve Johnson’s body. Waking up, burned out, among a piled of John Belushi headshots, it seems like the morning after would probably feel (and look) a lot like getting slimed.