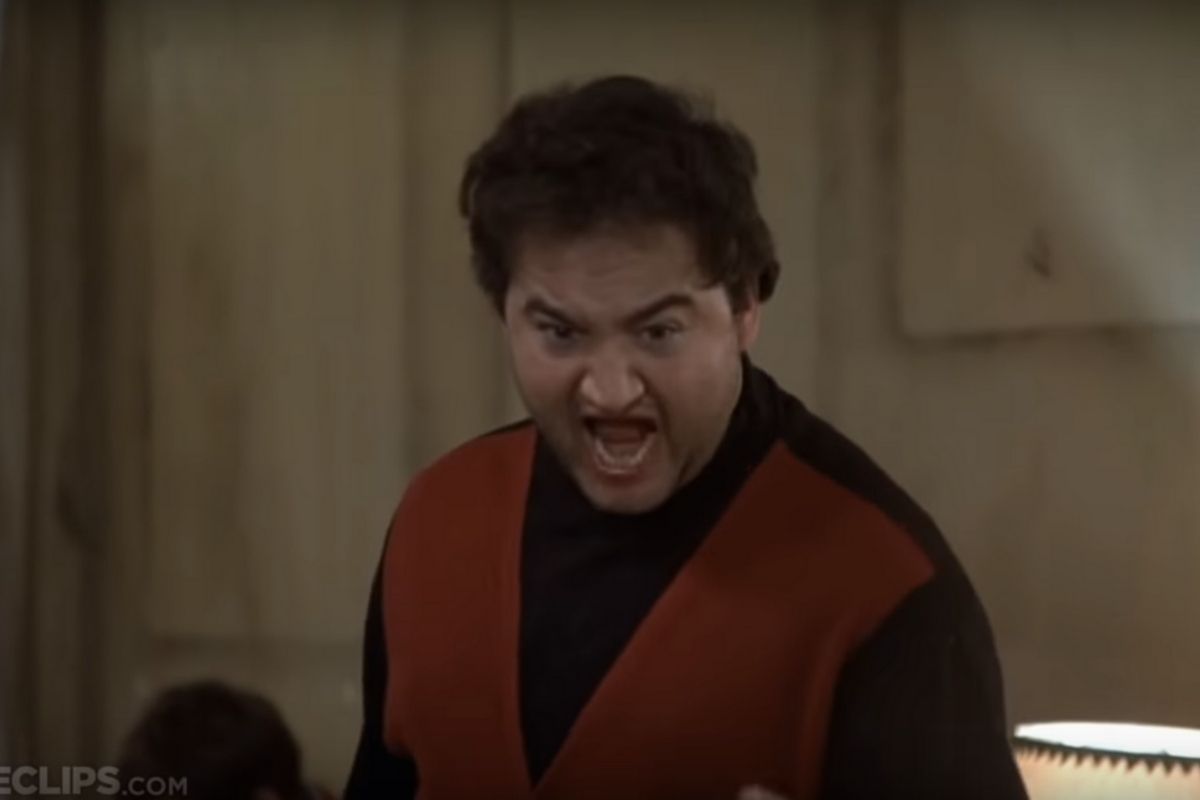 No freshman dorm room is complete without it: an incredulous John Belushi in his crewneck college sweater. The black and white poster, a snapshot from National Lampoon?s Animal House, stands for all the expectations of a hard-partying university experience. Within the frame, Belushi is immortalized like the guardian saint of guzzling Jack Daniels. So what?s the story behind his Animal House character, Bluto, the seventh-year senior? John ?Bluto? Blutarsky is perhaps most celebrated for the epic speech he delivered to fellow fraternity brothers. Speaking like a lieutenant to his loyal platoon, Bluto rallied them to rise against the school administration. So in honor of the legend ? both on and off screen ? we remember John Belushi?s ridiculous, impassioned call to arms.

Animal House, the first National Lampoon film venture, was directed by John Landis and written by Harold Ramis, Douglas Keeney, and Chris Miller. It follows the story of two freshmen, eventually dubbed “Pinto” and “Flounder” who start at the fictional Faber College (filmed at the University of Oregon) in 1962. Not fitting in at the snooty Omega Theta Pi fraternity, the boys find themselves rushing Delta House: home to a mischievous, ragtag team of wild young men. Hijinx ensue. Of the members at Delta House, the most animated — and awesome — is certainly John Belushi?s Bluto. (Sorry, D-Day, Otter, and Boon!) Bluto serves as something of a dirty mascot to the mess of a house. When the Delta brothers, who are on double-secret probation, combat Faber?s uptight dean, they double down on their right to party ? mostly thanks to Bluto.

Although Animal House plays out through scenes of bacchanalian revelry, food fights, and toga parties, it?s Bluto whose antics really command the screen. (?THEY TOOK THE BAR! THE WHOLE F***ING BAR!?) Looking much older than the other boys ? at 28, John Belushi was meant to represent an eternally flunking student ? Bluto?s riotous behavior cemented the actor?s rowdy reputation. At the time of production in 1978, Belushi was the young cast?s most established star. Already having made a name for himself through the first three seasons of Saturday Night Live, Animal House represented the up-and-comer’s successful transition to film.

The Best of Bluto

After a last-ditch attempt to cheat on an exam is foiled by the Omega Theta Pi fraternity, the Delta brothers? academics sink to a new dismal low. The dean, played seriously by John Vernon, officially kicks them out of school. Upon hearing the news, Delta House appears dejected and ready to give up. Until Bluto, taken up by a psychotic fervor, riles his friends up with the famed Animal House speech:

?What? Over? Did you say ‘over’? Nothing is over until we decide it is! Was it over when the Germans bombed Pearl Harbor? Hell no!… It ain’t over now, ’cause when the goin’ gets tough, the tough get goin’. Who’s with me? Let’s go! Come on… What the f*** happened to the Delta I used to know? Where’s the spirit? Where’s the guts, huh? This could be the greatest night of our lives, but you’re gonna let it be the worst. ‘Ooh, we’re afraid to go with you, Bluto, we might get in trouble.’ Well, just kiss my ass from now on! Not me! I’m not gonna take this. Wormer, he’s a dead man! Marmalard, dead! Niedermeyer… LET’S DO IT!?

Bluto?s motivational speech, spoken with true ignorance, takes on the gravitas of historical urgency ? without any real information or plan. It?s blind conviction. And at first, the house reacts accordingly. Bluto?s frat brothers roll their eyes, content to let the animal man tire himself out. But somewhere along the way, Bluto snags their attention. One by one, the college students are roused until they are charging out the door, ready to take on the whole campus. Beyond Animal House, Bluto’s zealous monologue has become a viral movie clip in its own right.

The Legacy of John Belushi

The resounding success of Animal House was more than just a steppingstone in the career of John Belushi. It set NBC’s fledgling sketch show, Saturday Night Live, apart as a potential pipeline into film. Two years later, Belushi would star alongside fellow Saturday Night Live cast member Dan Aykroyd in The Blues Brothers, an unusual comedy musical which would launch the pair into superstardom. As Jake Blues, the shady Chicago musician on a mission from God, Belushi leaned into his acrobatic sensibilities forr a performance that captivates audiences to this day.

But as Belushi found fame, he also found himself deeper in the throes of addiction. Not unlike his Animal House counterpart Bluto, Belushi?s lifestyle thrived on alcohol, drugs, and a revolving cast of enablers who recognized that when Belushi was intoxicated, he was fun. On March 5, 1982, he overdosed while speedballing (a mix of heroin and cocaine) at Hollywood’s Chateau Marmont hotel. He was 33 years old.

Not long after the death of John Belushi, the esteemed investigative journalist Bob Woodward published Wired: The Short Life and Fast Times of John Belushi. Wired is primarily concerned Belushi’s patterns of addiction and presents his brief, fiery life as something of an inevitable crash collision. Belushi?s widow, Judith Belushi Pisano, and Dan Aykroyd have both publicly denounced the work of nonfiction as exploitative trash. Although Pisano and Aykroyd willingly spoke with Woodward, they insist that the writer failed to capture any larger narrative of Belushi?s humanity. Wired eventually became a biopic, starring Michael Chiklis, which was critically panned. It?s often referred to as the worst biopic of all time.

However, there is still hope! A new film about John Belushi is currently in the works and the cast appears to be star-studded. Directed by David Frankel (of Devil Wears Prada fame) and with a screenplay by Steve Conrad (who also wrote Weatherman), this new take on Belushi arrives with the full support of his living family. Happy Endings actor Adam Pally will star as the unique celebrity, alongside Ike Barinholtz as Dan Aykroyd and Aubrey Plaza as Judith Belushi Pisano. With big names and such fandom riding on the cause, we?re hopeful that the upcoming Belushi will challenge our perceptions of the late comedian and shed light on his complicated inner life. Bluto would want to go down fighting.