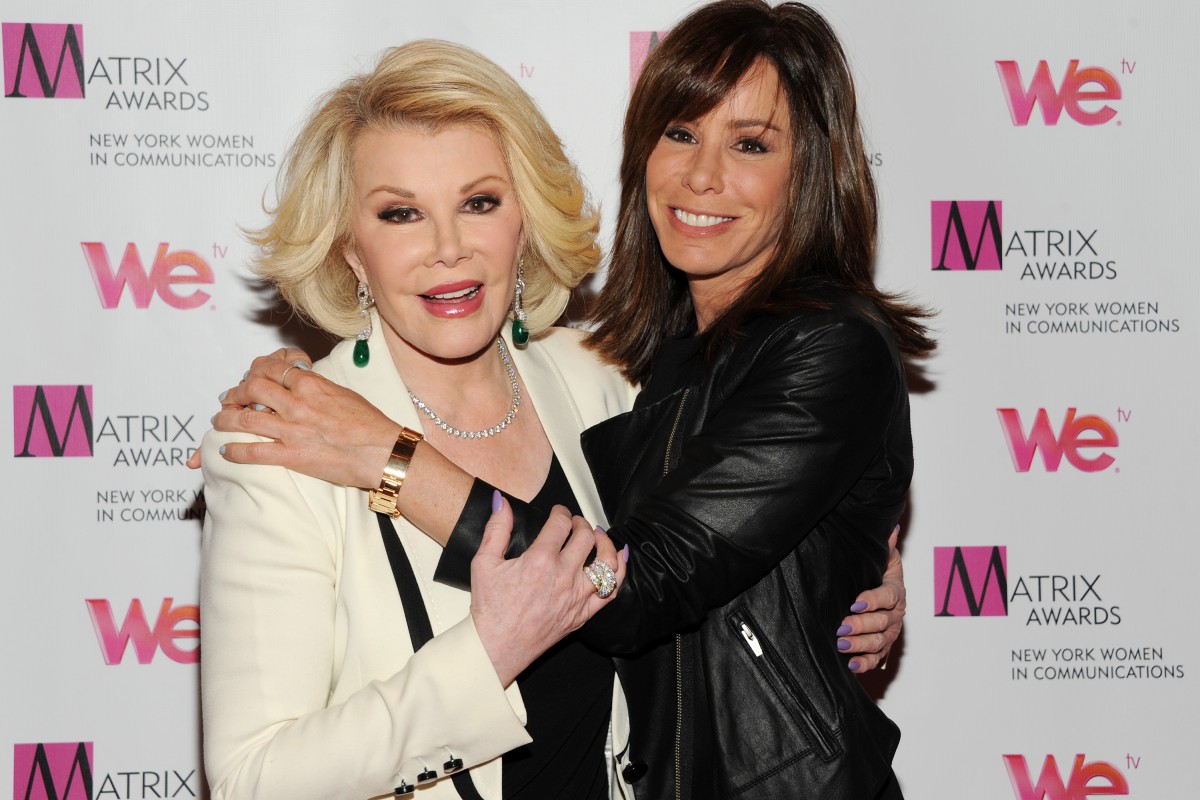 Like many mother-daughter duos, comedian Joan Rivers and her daughter Melissa Rivers didn’t always get along. Melissa was the daughter of Joan and her second husband and manager Edgar Rosenberg. Rosenberg committed suicide after The Late Show with Jone Rivers was canceled by the FOX Network in 1987. After Joan was fired from the late-night talk show, Rosenberg, overwrought with shame for the show’s cancellation, killed himself.

Joan told People magazine that Melissa blamed her for her father’s death. But,” said the comedienne, “she wasn’t going to turn to me by the casket and say, ‘You killed Daddy!’” To make matters worse, Joan discovered that her husband had burned through her Fashion Police earnings and squandered her millions of dollars on poor investments, leaving her $37 million in debt. Splitting her time between her home in Bel Air and a hotel in Manhattan, the former television host was isolated, depressed, and spiraled into bulimia. The comedian was so disheartened, she even considered suicide on the eve of her 55th birthday.

As Joan explained in an interview with the Daily Beast, “Melissa wasn’t talking to me, my career was in the toilet, I’d lost my Vegas contracts, I’d been fired from Fox … I thought, ‘What’s the point? This is stupid.'” In the end, it was her Yorkshire terrier, Spike, (who Melissa referred to as “a tall rat“) who kept her from committing suicide. Joan was worried that with her gone, no one would be around to take care of him.

Melissa’s Side of the Story

Joan’s mother’s intuition was correct: Melissa was angry at her mother for her father’s death. At the time, she was attending the University of Pennsylvania in Philadelphia and rarely saw her mother.

A Mother and Child Reunion

Despite their heartache and falling out, Joan wouldn’t give up on the Rivers family and their relationship. She insisted the two of them begin psychotherapy, both together and separately in Los Angeles, California, and Philadelphia. When Melissa found herself in a physically abusive relationship, it was her mother who was by her side. “It made me realize what I had—and the thing I had and will always have is my mother. She was right there for me,” Melissa told People.

In a 2012 episode of the reality series Joan & Melissa: Joan Knows Best?, the two shared an emotional conversation that revealed just how close they’d grown. “If anything happens, Melissa,” Joan told her daughter before a plastic surgery operation, “I’ve had a great life. If I died this morning, nobody would say ‘so young.’ You’re a terrific person, Cooper’s fine. … I’ve had an amazing life, if it ended right now — amazing life! You’ve been wonderful and we’ve had a great ride together.”

In 2014 at the age of 81, Joan passed away from cardiac arrest following a routine throat procedure on her vocal cords at an outpatient clinic called Yorkville Endoscopy in Manhattan. After Joan stopped breathing, she was resuscitated and transferred to New York City’s Mount Sinai Hospital and put on life support. According to the New York City Medical Examiner’s Office, Joan died from brain damage caused by a lack of oxygen.

In the week leading up to the comedian’s death, Melissa had stayed by her bedside.

In a written statement announcing her mother’s death, Melissa said that she and her son Cooper were humbled by the love and support they received from around the world. “My mother’s greatest joy in life was to make people laugh,” Melissa wrote. “Although that is difficult to do right now, I know her final wish would be that we return to laughing soon.”

A Malpractice Lawsuit in her Mother’s Death

After finding out that a doctor had taken a selfie with her mother as her vital signs plunged in the operation room, Melissa would go on to file a malpractice lawsuit against the Yorkville Endoscopy clinic. The lawsuit was settled for an undisclosed amount.

“In choosing to accept this settlement, I am able to put the legal aspects of my mother’s death behind me and ensure that those culpable for her death have accepted responsibility for their actions quickly and without equivocation,” Melissa said in a statement.

The clinic was quoted as saying, “The parties agreed to settle this case to avoid protracted litigation. We remain committed to providing quality, compassionate health care services.” In a recent interview, Melissa remembered her mother fondly and said she would have loved wearing a mask during the  COVID-19 pandemic.  “Think of all — it hides a multitude of flaws,” said Melissa. “Exactly, you know, she would — she would have been very happy because that meant she only had to do her eye makeup.”