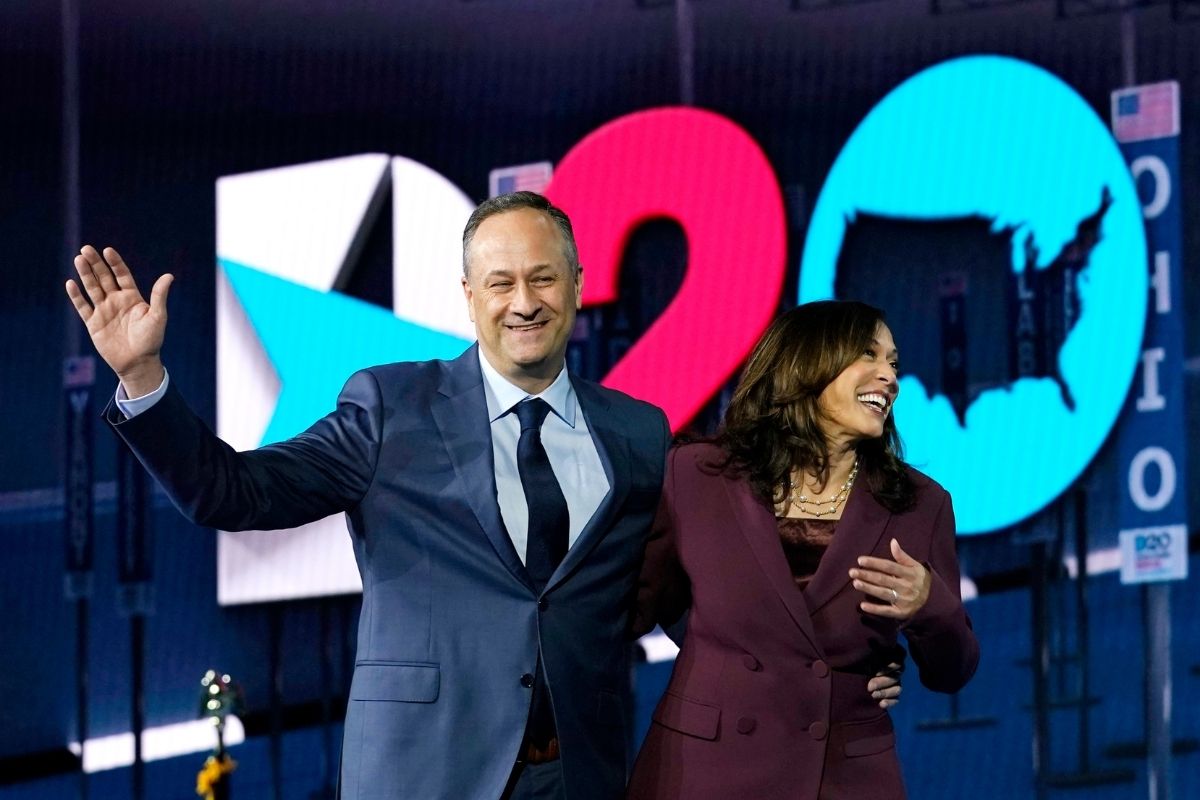 Since Kamala Harris is the first woman — and first black and first Asian — vice president, naturally, her husband Doug Emhoff is the country’s first-ever Second Gentleman. Their whirlwind romance, which began just eight years ago, has led to a blended family and blissful marriage. So what’s the real love story behind this historic couple?

In 2013, Kamala Harris met Douglas Emhoff on a blind date organized by one of Emhoff’s clients. Emhoff was a divorced entertainment lawyer living in Los Angeles. At the time, Harris was the California Attorney General — a pretty intimidating set-up, if you ask me. But Emhoff was interested as soon as he saw a photo of the future Madame Vice President. “She’s hot,” was his first thought, according to a candid online interview with Chasten Buttigieg.

Leading up to their first date, Doug Emhoff has described leaving a nervous, rambling voicemail message for Kamala Harris, saying, “It was like the scene in Swingers when Jon Favreau just keeps calling and calling.” Embarrassing! But it was clear that he recognized just how much his future date — and future wife — would change his life. In an Instagram post on Harris’ birthday last October, Emhoff described their meeting as “love at first sight.”

Doug Emhoff had split from his first wife, film producer Kerstin Emhoff years prior. They share two children: Cole and Ella, who you might remember as a breakout star of the presidential inauguration. Cole and Ella were young teens around the time that their father met Harris. Since both Emhoff and Harris were serious professionals, and there were kids to think of, they quickly decided their budding relationship would need to be serious to work. By 2014, they were married.

“She’s got plenty of great people giving her political advice. I’m her partner, I’m her best friend and I’m her husband. And that’s what I’m here for. I’m here to have her back.”

In marrying Doug Emhoff, Kamala Harris became step-mother to his children from a previous marriage: Cole, who is 26, and Ella, who is 21. Lovingly, they refer to her as “Momala.” During the 2020 Democratic Convention, Ella even called Harris “the world’s greatest step-mom” in a video montage introducing the VP candidate to the world.

Though Cole Emhoff has remained relatively out of the spotlight — according to LinkedIn, he works at Plan B Entertainment as an executive assistant — his sister Ella Emhoff has gained a national following. Once countless Americans saw Ella, in a beaded Miu Miu coat, at January’s inauguration ceremony, the second step-daughter has become a media sensation. Ella is currently a New School visual arts student, living in the Bushwick neighborhood of Brooklyn. She focuses on creating original knitwear, and according to The New York Times, recently released a five-piece collection. Check out the garments here.

A sold-out knitwear line is not the only success Ella Emhoff has found following the start of the Biden-Harris administration. Both Emhoff and inaugural poet Amanda Gorman were quickly signed by IMG Models, an agency that represents more than half of the world’s highest-paid supermodels.

When Kamala Harris herself was a presidential candidate, she did not go far in the primaries. But as soon as Joe Biden tapped the California senator to be his running mate, Harris’ unique family story became a fascinating addition to the Democratic presidential campaign. Emhoff took a leave of absence from his law firm, DLA Piper, to join his wife on the journey to become vice president of the United States. (He formally stepped down following the 2020 election.) During that time, Emhoff deftly used social media to present their brand of the American family: one where a supportive husband is as integral as the many likable First Ladies we’ve watched over the years. It was a refreshing update to the typical Washington, D.C. campaign trail picture.

Taking over official duties from Mike Pence, Kamala and Doug’s playful relationship feels so directly at odds with the previous administration. Pence famously referred to his wife as “Mother” and was discouraged from spending time alone with other women — even in professional contexts. Meanwhile, Kamala Harris defines our perception of the current White House crew with Doug Emhoff stepping up to become the ultimate Second Gentleman: sharing selfies, stories, and trying to make the most of a ceremonious role.