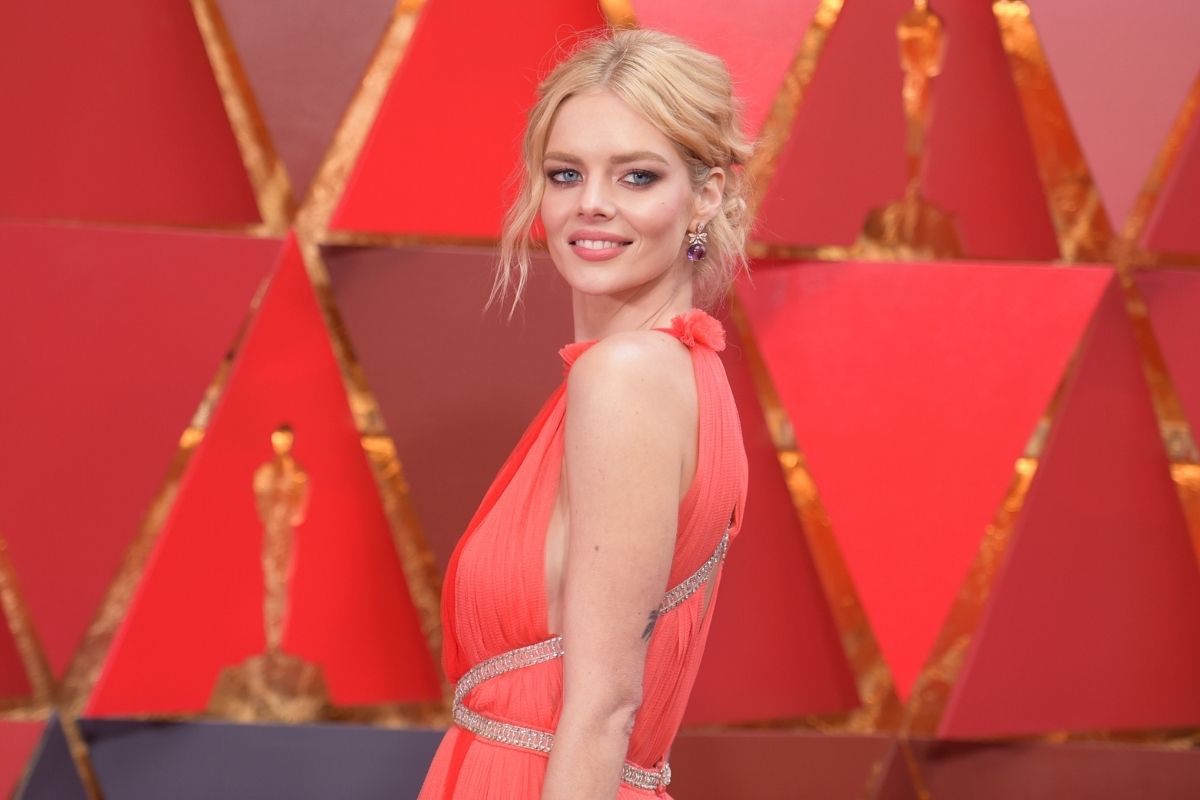 Actress Samara Weaving has seemingly come out of nowhere during the last few years after making a splash in several over-the-top horror comedies in a short amount of time. However, Weaving has been acting for decades, starting long before she made her way to Hollywood. What else is there to learn about the funny, talented, blonde, Australian actress who is not Margot Robbie?

1. The Movies are a Weaving Family Business

Samara Weaving was born in Adelaide, Australia on February 23, 1992, and grew up in Singapore, Fiji, and Indonesia. Her family settled in Canberra when her father, filmmaker Simon Weaving, was made artistic director of the Canberra International Film Festival, per the Sydney Morning Herald. Her uncle is actor Hugo Weaving of The Matrix and Lord of the Rings fame and her sister Morgan is also an actress.

2. She Started Out on Soap Operas

After winning the role of Kirsten Mulroney in the soap opera Out of the Blue in 2008, which was canceled after a year, Samara was cast as Indigo Indi Walker on the soap Home and Away and played the role from 2009 until 2013, receiving a nomination in the Audience Choice Award for Best Female Performance in a Television Drama for the Australian Academy of Cinema and Television Arts Awards. She decided to move on to the big screen that year, appearing alongside her uncle Hugo Weaving in the crime film Mystery Road.

Weaving has become a bit of a horror icon over the years. In 2015, she starred in the first season of the Starz horror comedy Ash vs Evil Dead, which was filmed in New Zealand. In 2016 she appeared in the drama Bad Girl and the action-comedy Monster Trucks, and in 2017 she appeared in the Best Oscar-winning film Three Billboards Outside Ebbing, Missouri. The cast won a series of awards for their ensemble performance, including one from the Screen Actors Guild.

Weaving?s other major role in 2017 was her first lead in an American film. She played the title role of a babysitter who secretly leads a devil-worshipping cult in director McG?s horror-comedy The Babysitter, which premiered on Netflix. Dread Central raved about Weaving, noting ?McG’s hilarious and gruesome occult comedy proves Samara Weaving’s worth seventy-billion times over, turning her into the new genre ‘it’ girl overnight.”

4. She Auditioned for Fifty Shades of Grey…With Her Parents!

From 2017-2019, Samara Weaving starred as Nelson Rose in the Showtime comedy series Smilf, had the leading role of Irma Leopold in the 2018 miniseries adaptation of the Australian mystery Picnic At Hanging Rock, and in 2019 broke through with her role in the slapstick horror-comedy Ready or Not in which she played the ultimate ?final girl,? battling her spouse?s evil, wealthy family on her wedding night as they attempt to kill her as part of an ancient ritual. Audiences and critics loved the movie and Weaving?s performance; Entertainment Weekly said ?Come for the crossbows, etc., and to watch Weaving’s star be born in real time; stay for the socio-economic lessons and sweet, sweet revenge.?

Weaving?s star was on the rise and it was a far cry from a low moment in her career that is pretty funny in retrospect. In an interview with the Chicago Tribune just before the premiere of the Ryan Murphy Netflix series Hollywood, on which Weaving starred as movie star Claire Wood, Weaving got real. She revealed that not only had she auditioned for the role of Anastasia in Fifty Shades of Grey, she had to co-star alongside her parents in a taped at home audition: ?Alas, we roll the camera, and my mother starts reading her lines and she can?t help but start laughing. And I, on other hand, am not finding this funny. This was a very serious opportunity that could start my career in America! Please keep it together! I?ve gotten this callback, the stakes are very high!? Weaving, of course, did not get the role, but it turns out her American career started after all.

Weaving’s appeared in the 2019 action movie Guns Akimbo with Daniel Radcliffe and dominated 2020 with not only her role in Hollywood but an appearance as Alex Winter?s daughter in the Winter/Keanu Reeves nostalgia-fest Bill & Ted Face The Music as well. To top it all off, she announced her engagement to producer Jimmy Warden. Per Digital Spy, Weaving made a now-deleted Instagram post in which she posted a photo of the couple and captioned it ?So here goes! Jimbo and I are engaged!! Let’s party my loved ones!!” The couple has been dating since 2016 and Weaving sports a unique sapphire and diamond engagement ring.

Weaving has much to celebrate in both her personal and professional life. She will appear in the Hulu series Nine Perfect Strangers alongside Nicole Kidman and will star as Playboy model/former Girl Next Door Holly Madison in a television adaptation of Madison’s memoir Down the Rabbit Hole: Curious Adventures and Cautionary Tales of a Former Playboy Bunny.

Watch: Margot Robbie Was Injured During the ?Wolf of Wall Street? Sex Scene with Leo DiCaprio