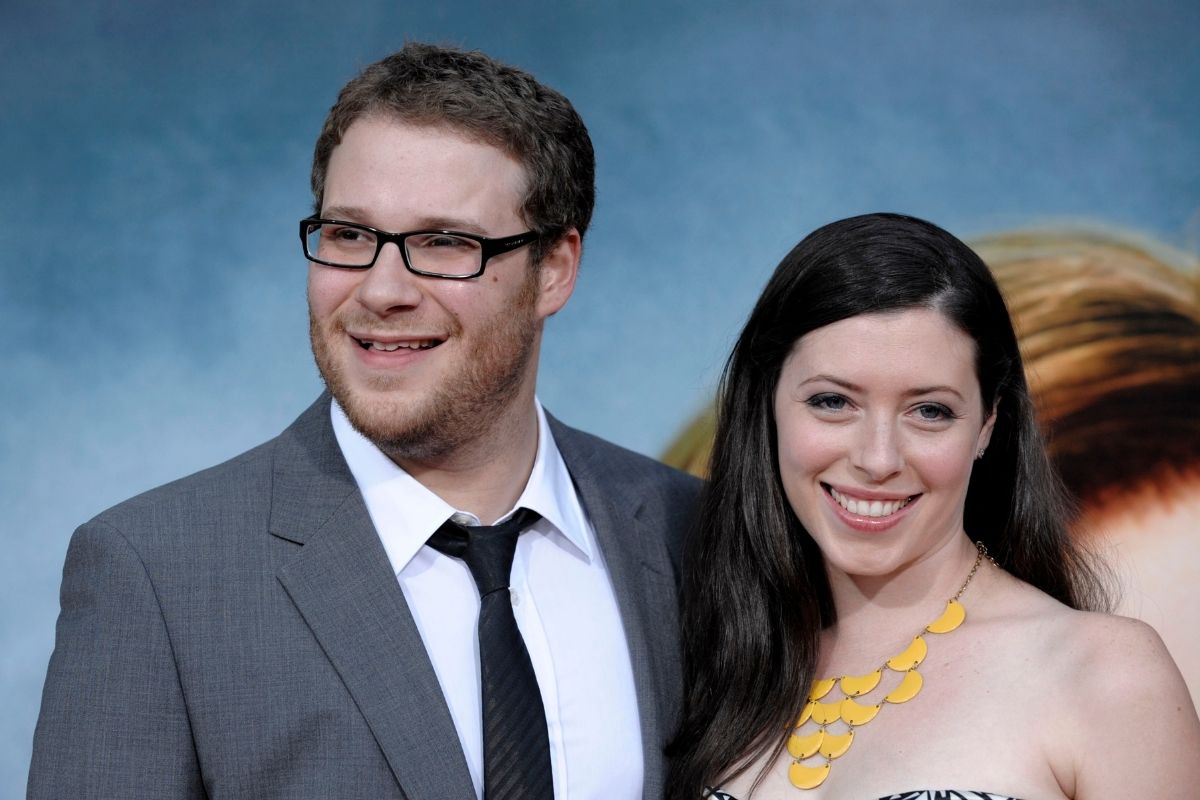 Seth Rogen is known for hilarious, often schlubby roles in stoner comedies. And while his real-life reflects that persona in some ways ? Rogen really is a post-smoking, easygoing, funny man ? he is also an incredibly ambitious comedian. Since appearing as a teenager in Judd Apatow’s sleeper hit sitcom Freaks and Geeks, he’s remained in the spotlight through starring roles in Knocked Up, Pineapple Express, and equally, as a screenwriter and director.

Rogen’s wife Lauren Miller Rogen is a screenwriter and director as well. Although you might recognize the actress from her raunchy breakout film, For a Good Time, Call… Read on to learn about the low-key love story of these two talented entertainers.

Seth Rogen grew up in Vancouver, Canada, and naturally took to comedy. When he was just 13, Rogen co-wrote a rough draft of Superbad with his friend from Hebrew school, Evan Goldberg ? who is still Rogen’s creative writing partner. But Rogen’s Canadian childhood was short-lived. When Rogen was just 16, he landed a role on Judd Apatow‘s NBC series, Freaks and Geeks. He dropped out of high school and moved to Los Angeles to begin his acting career. Although Freaks and Geeks was (tragically) canceled after only a season, working on the cult classic introduced Rogen to lifelong collaborators, including James Franco and Jason Segal… the beginning of director Apatow’s own iteration of the slacker “frat pack.”

Following the cancellation of Freaks and Geeks, Seth Rogen found work primarily as a writer. He was on staff for the final season of Da Ali G Show, Sacha Baron Cohen’s early (still hysterical) satire. But his first bid as a leading man would come, unsurprisingly, through a Judd Apatow project: Knocked Up. This acclaimed 2007 sex comedy cemented Rogen’s man-child reputation. The same year, Superbad premiered: the final form of Rogen and Evan Goldberg’s original tween undertaking. Since then, Rogen has stayed a mainstream Hollywood star. His extensive filmography includes the controversial The Interview, Sausage Party, Observe and Report, and the totally underrated Longshot. (This rom-com, which co-stars Charlize Theron, is not necessarily great cinema but has a kooky and surreal quality that makes for great pandemic watching.)

Ari Graynor played the part of Miller’s roommate in the film and honestly, she steals the show. Graynor’s cackling performance is vulnerable and funny, and although the film received mixed reviews, she and Miller put theirs all into this edgy, friendship-powered comedy. In 2018, Lauren Miller made her directorial debut with Like Father, a father-daughter dramedy set on a cruise, starring Kristen Bell and Kelsey Grammar.

The Romance of Seth Rogen and Lauren Miller

While working on Da Ali G Show during the early aughts, Seth Rogen became acquainted with producer Paul Reiser. Reiser was dating a friend of Lauren Miller’s and set Rogen up with the young actress at a birthday party in 2004. Their connection was instantaneous. The pair left the party together and reportedly stayed up until sunrise eating grilled cheese and playing Scrabble. But their first official date was not as successful. Miller and Rogen went out to play mini-golf and on the way home, were struck on the freeway by a hit-and-run-driver. Miller described the story to Jimmy Fallon on The Tonight Show saying, ?A 16-year-old had stolen his dad?s car and hit us. He drove off and we spun across three lanes of traffic. [Rogen] totaled his car, my roommate had to come to drive him home, and that was our first date.? But the fear of the moment drove Miller right into Rogen’s arms ? literally. “When I got out of the car I hugged him,” she told Us Weekly. “I needed to hold on to something.”

Seth Rogen proposed to Lauren Miller on September 29, 2010. He described the unconventional proposal on Conan, saying, ?She was in our closet, changing, and she was literally only in her underpants.” Taking advantage of the moment, Rogen said, ?I figured the only appropriate thing was to place the ring on her nipple, actually.? Classic Rogen. The couple married on October 2, 2011.

Seth Rogen seriously opened up his intimate relationship with Lauren Miller in a 2014 essay for Glamour Magazine. In this rare article, Rogen describes getting to know his then-girlfriend during the toughest period of her life: when her mother Adele was struggling with Alzheimer?s Disease. Rogen and Miller eventually moved her parents to a nearby duplex in Los Angeles so they could help out. The incomparably tragic experience of watching their loved one slip away inspired the Miller-Rogen’s to start Hilarity for Charity, a nonprofit which raises money for Alzheimer’s research and awareness. You can explore their mission here: wearehfc.org.