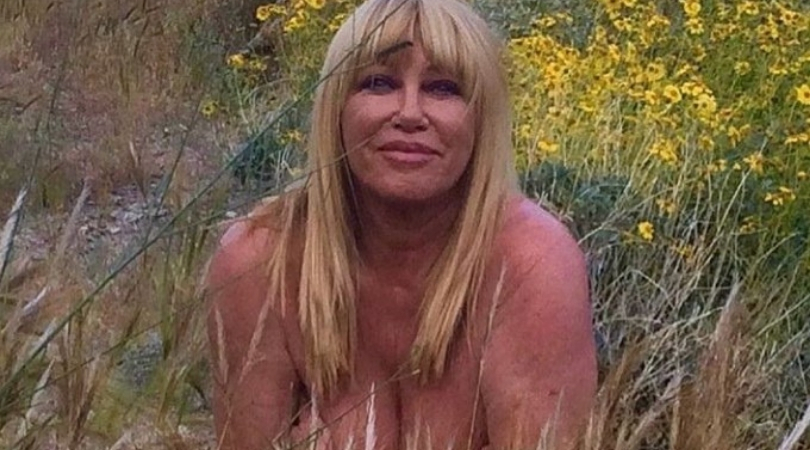 Editors Note: This post was originally published on October 17, 2019. It was updated on October 24, 2019, after Suzanne Somers responded to the social media comments about her Instagram post.

It looks like Suzanne Somers has a few words to tell her trolls after she recently posted a photo of her naked on her 73rd birthday. Through an interview, she decided to put down her haters stating, ?When you?re 73 years old and you want to take your clothes off, you don?t like it, too darn bad.? The actress laughed after her comment, seeing the bright side of the situation and not caring much about what other people have to stay.

Her comment comes after several online users, specifically on her Instagram page, we’re commenting how she shouldn’t be posing naked since she is over 70-years-old. Safe to say Somers doesn’t care what people say or think about her, because well if I looked like that at her age I wouldn’t mind either.

Somers stated all her photos are taken by her husband Alan Hamel, who she has been married to since 1977. If this incident taught me anything, is that I should probably find a man that will take pictures of me while wearing no clothes in the middle of a field and not care what people think. Is that the secret to marriage? Go, Suzanne, go!

Original story below
Listen up ladies and gentlemen, you are allowed to do whatever you want during your birthday! Well, almost everything. You can’t go around killing people, or you know, rob some banks here and there. But, you ARE allowed to post whatever you want because well, you’re celebrating surviving another year around the sun. That’s tough to do. Which is exactly what actress Suzanne Somers did. But no, trolls being trolls decided to attack poor Somers on her birthday and made a huge deal about it.

Somers decided to share a “controversial” photo of her ‘birthday suit’ on her Instagram, celebrating her 73rd birthday. In the photo, she appears to be fully naked while squatting in a field of tall grass and wildflowers. The photo seemed to copy one she posted of herself in an outdoor bathtub a few years back. As expected, the audience was not having it and there were some quite nasty reactions in the comment section.

Although some fans and family wished her a happy birthday telling her she looked great, trolls quickly called the photo a “bad taste” on her part. Several users on social media also thought she shouldn’t be posting nude photos like these, especially if one is over 70. Now, all I have to say about this whole situation is this: let the woman live her damn life. Honestly, she looks good!

Y’all wish you can look like this as 73! This woman is rocking it, and flaunting her body to show that she is healthy, happy, and still has it. Somers, who is known for her sitcom roles on American Graffiti, Three’s Company, and Step by Step, has been a huge influence in the fitness community for years. In the mid-90s she became the spokesperson for Thighmaster, an exercise contraption that is placed between your knees, causing resistance when you squeeze. It works out your thighs and helps you lose weight.

So, if she decides to flaunt her body to show that she is still fit as ever, then by God, just let her, man. Geesh, I hope I look like this when I turn 73. Somers if you’re reading this, ignore all the comments, you keep doing what you do best!