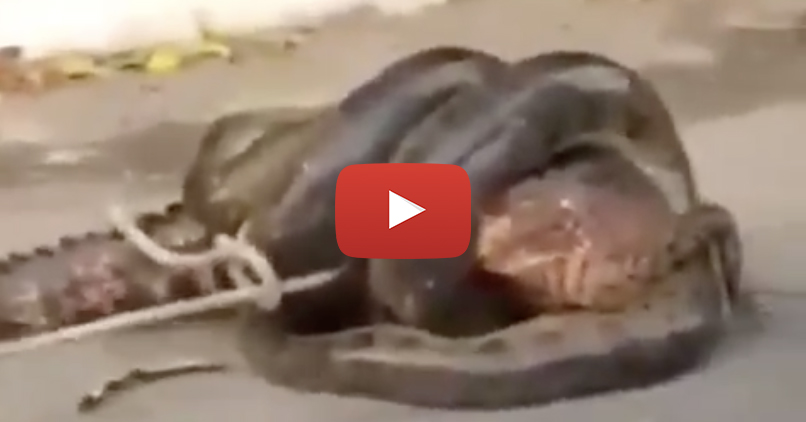 It’s amazing to me that human beings were ever able to settle jungle environments, let alone build civilizations there. Serious props to the Mayans, the Kutai people of Indonesia, the Sao, Kanem, Bornu, Shilluk, Baguirmi, and Wadai peoples of Central Africa, and the many Parrot Heads currently living in trailers on the edge of the Everglades in Florida, just to name a few. It’s impressive you guys didn’t peace the F out of there the second you saw some dinosaur-sized crocodile or a spider big enough to eat a human face.

Truly these peoples were among the bravest humans to ever live. I wouldn’t feel comfortable walking into the jungle today with a flamethrower and the ability to teleport out at a moment’s notice. And make no mistake, the development and modernization of civilization has done little to curb the jungle’s primal, hungry, and just generally gross and scream-inducing nature. Case in point: these people living in a condo complex in Brazil who walked outside to find an anaconda strangling and trying to eat an alligator.

This waking nightmare occurred outside some condos in Natal, in eastern Brazil. After the residents separated the gator from the anaconda both demon-beasts slunk back into the forest, presumably to regather their strength and wait for someone’s family cat to come along so they can rip it to pieces.

Some Twitter users regretted that the residents broke up the reptilian tangle, saying that they were interfering with nature. I have to agree. The residents made a grave mistake. Now, instead of their condo complex being down one apex predator and having the other so full it won’t need to eat for like six months they’ve got two hungry monsters lurking in their backyards. Granted if the anaconda had finished the job it would’ve grown bigger and hungrier, so I guess things could go either way. The only real right answer was, “Douse the whole mess in gasoline and send them back to hell” but obviously they didn’t opt for that. Let’s hope that decision doesn’t very literally come back to bite them.