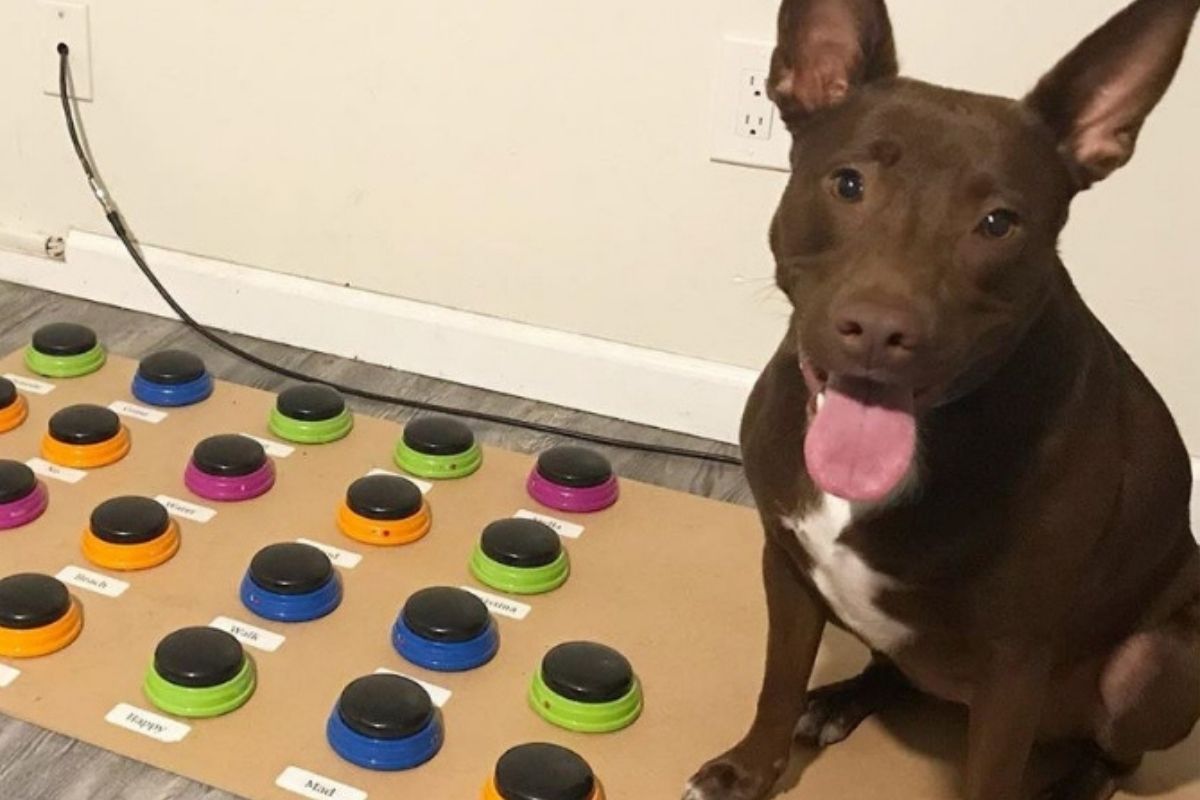 Dogs are the smartest animals on the planet. You can go ahead and fight me on that, I don’t care, I’m sticking to that statement. I can prove it to you, too.

Meet Stella, an 18-month old Catahoula/Blue Heeler Mix, also known as the talking dog. Well, not technically, but she does have a voice. Thanks to her patient owner, Christina Hunger, the pup is learning how to use an adaptive device commonly used by young children, to share her thoughts.

Hunger works as a speech-language pathologist, but at night, she uses her talent skills to teach Stella how to communicate. Stella currently knows a total of 29 words and can form five-word phrases or sentences.

How? Well, Hunger created a system that features a number of buttons that when pressed they play a particular word or sound. She began to teach Stella how to “talk” using the buttons when she was eight weeks old. Now, the smart pupper can express when she wants to go play, eat, walk, or when she needs help. In a way, she communicates as a 2-year-old child would.

The speech pathologist posts video of the pup on her Instagram page, Hunger4words, showing her amazing skills. One video even showed the dog frantically looking outside, scared, pressing the button “look” before repeatedly pressing “come outside” and walking towards the front door. Like I said, smart doesn’t even cut it for Stella!

The 26-year-old said she is amazed as to how far Stella has come and continues to expand her knowledge, eventually wanting to teach other dogs to “speak” the same way Stelle is. As far as her training, it is based on Augmentative and Alternative Communication, which is also known as ACC. Hunger explained that people have two language abilities, one receptive language which is language understanding, and expressive language which is what we say.

Although she knows that dogs can’t speak the same way as humans, canines can express themselves in other ways such as barking or jumping. She began teaching Stella the word “outside.” Hunger would press the button on the custom soundboard and say “outside” before opening the door. Eventually, Stella understood what her mom was doing, and became aware of the connection between the world itself and literally going outside. She then started to press the button independently.

As the dog mom began to introduce different words and buttons, the more Stella began to learn. So, similar to how we are able to learn things as children, Steel was able to learn special words by following Hunger’s motions.

Go, Stella, go! You deserve all the belly rubs!

Editor’s note: This article was originally published on November 13, 2019.