This Unbelievably Giant Cow From Australia Looks Fake… It’s Not 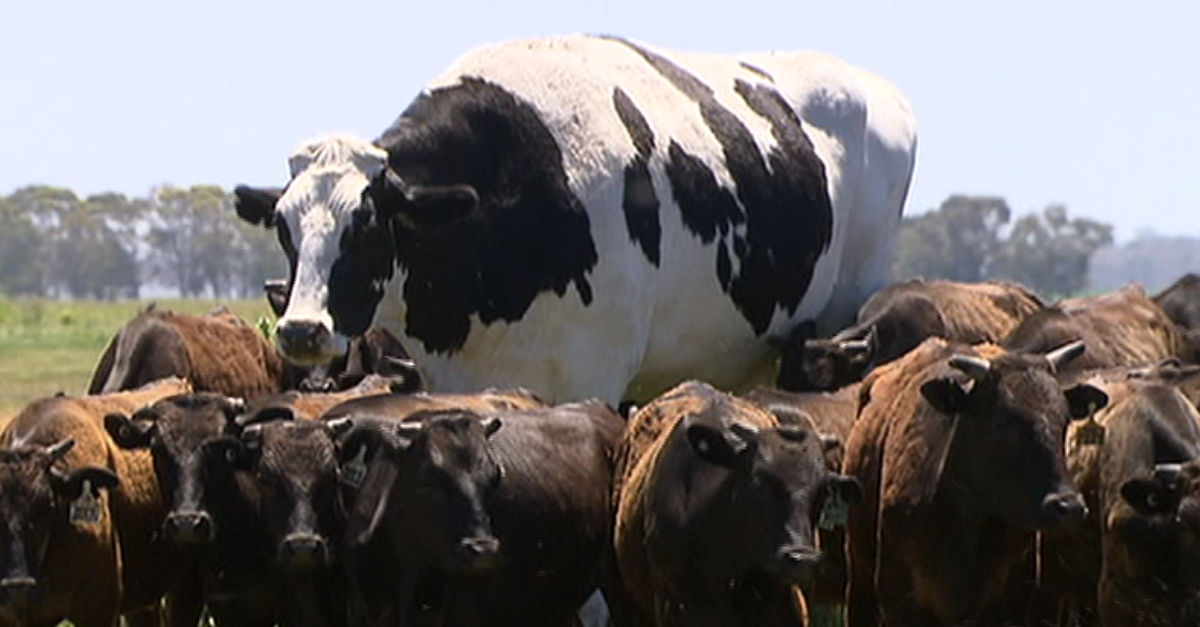 A Holstein Friesian cow in Western Australia is making headlines across Australia and the world for being, literally, the biggest cow you’ve ever seen in your entire life. It’s so big that if you saw this thing walking toward you your only two conclusions would be that, 1) you shrunk, or 2) there’s a radiation leak somewhere and you’ve got to get the hell away from where you are before the affected spiders start popping up.

According to owner Geoff Pearson, the cow, named Knickers, is over six feet tall. It’s basically the same height as Michael Jordan, who was 6ft 4in, which is fitting because this cow is the Michael Jordan of being a giant f*cking cow. Knickers also weighs over 3,000 pounds, making it roughly the size of a sedan.

The seven-year-old Australian cow is, unofficially, Australia’s biggest steer. It’s unclear why that title isn’t officially in the record books, but a quick wide-angle satellite survey of the continent would pretty much confirm that there isn’t a bigger cow. Just have the space station astronauts look out the window. When all they see is Knickers, they’ll be able to confirm that the enormous steer wins.

An enormous steer in Western Australia is making headlines. At 194cm 'Knickers' is the largest in his category in Australia. Story: https://t.co/ZI472MBUU4 #7News pic.twitter.com/MDEMwEbD8R

Pearson, a Myalup cattle farmer in Western Australia, south of Perth, says that he got Knickers so that the steer could be a “coach” and take charge of the rest of the herd. Which, naturally, it did. Look at that thing. If there was someone that proportionally bigger than everyone else in prison, then that guy would obviously be running the joint. And what is a cattle farm but a cow prison? This cow is the farm’s alpha.

Knickers is also under no threat of becoming a million hamburgers either, Pearson says. His standout steer is too big for a processing facility to handle. Pearson says the cow is going to live a long, happy life on his farm.

Personally, I’d like to see this thing shipped to America. Not so we can send it through our likely much larger meat processors just to see how many steaks this thing has in it, but so it can be taken to the NBA All-Star Dunk Contest. I want to know which NBA players can dunk over a cow the height of Michael Jordan and the weight of a Subaru.

Watch: Everything You Need to Know About the Highland Cow