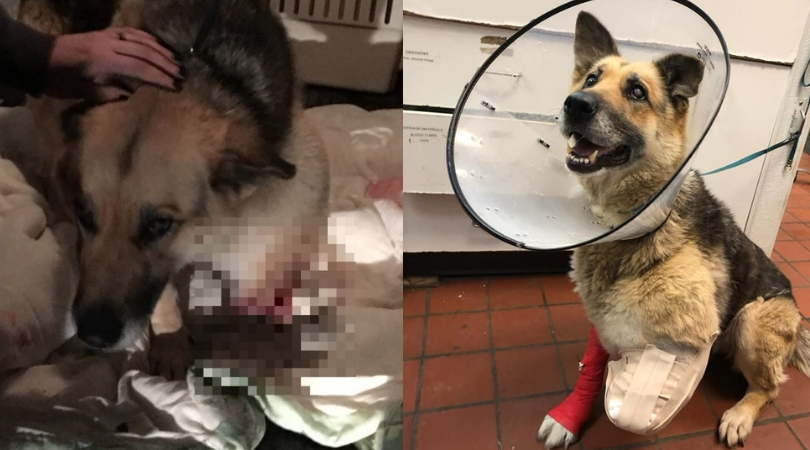 I really hate people who don’t understand that owning a pet is a huge responsibility, meaning you need to have a lot of patience and time to take care of them. Think of them as your own children, because at the end of the day, you are responsible for them. If you don’t have time, or can’t provide them with the attention they need or deserve then maybe the best thing is to not own an animal.

Like this terrible human, who should go to jail for life. Why? Because he left his poor dog out in the open to starve. Yes, meaning the starving dog did everything she could to survive. Which included chewing her own leg off.

According to Susquehanna SPCA, Zoe, who is a German Shepherd, was found by UPS driver Mark Mcgee chained up in a backyard. Zoe was found with no food, no water, and was living outside in a plastic pet crate with hay inside. The pup was suffering from multiple health ailments and was missing her front left leg.

The driver immediately took her to a veterinarian where they tended to the starving dog and found bones inside her stomach. They believe Zoe may have chewed up her own leg as a result of chronic pain.

Through a Facebook post, the animal group stated that they don’t often share with their general public the behind-the-scenes work they do, but after experiencing the traumatic event with the 9-year-old dog, it was necessary for the public to see.

“Yesterday afternoon we received a report of suspected animal cruelty where a dog tied out to inadequate shelter looked like her leg had been “blown off” and was not receiving care. With the help of Otsego County 911, the New York State Police, Heritage Veterinary Clinic, Oneonta Veterinary Hospital and Anita Vitullo of Staffworks, we saved Zoe. Zoe is the senior German Shepard pictured here who was in need of immediate medical attention.”

After investigation from local authorities, The New York State Police stated they found the owner, 59-year-old Carl Pritchard, and has now been arrested. The man was charged Agriculture and Markets Law Agriculture and Markets Law overdriving, torturing and injuring animals, failure to provide proper sustenance (which is a misdemeanor) and failure to provide appropriate shelter for dogs left outdoors (which is a violation).

As far as Zoe, she was cared for by veterinarians in Oswego County and is now at the Cornell University College of veterinary medicine making a full recovery.

Watch: Taking a Road Trip with Your Dog