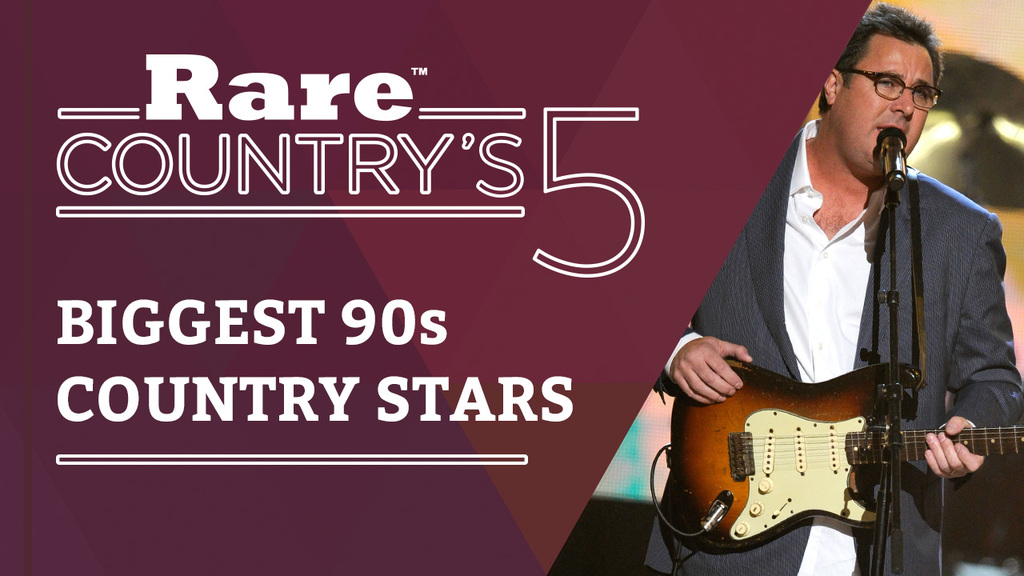 Whether it?s their songs, their style or the way they navigate the stage in their live shows, today?s hottest young country stars will openly and happily admit that they are under the influence — the influence of country music?s most iconic stars of the ’90s. In this special edition of Rare Country?s 5, host Erin Holt is going to talk us through the five biggest artists country music had to offer in the ’90s.

He?s one of the most respected singers, songwriters and guitar pickers in Nashville, and those kudos stretch across a couple of decades now. But, in the 1990s, Vince Gill was on fire. A five-time CMA Male Vocalist of the Year and a two-time Entertainer of the Year, Vinny wasn?t just racking in country trophies, he also earned over a dozen Grammys. During the 1990s, he released eight albums, more than two dozen hit singles including signature smashes like ?I Still Believe In You,? and established himself as, get this, a respected golfer with his own namesake tournament.

When it comes to being timeless, George Strait has set the bar high. His talent and success spans multiple decades, but it was in the 1990s that he blew the roof off the joint. George released a new album every year of the ’90s, along with three dozen singles. Half of those went to No. 1 and most of the other half weren’t too far behind. It was a decade for memorable hits like ?Love Without End, Amen,? ?Check Yes or No? and ?I Just Wanna Dance With You.” And George made his debut in a starring role in the movie ?Pure Country.? And when it came to winning awards, the cowboy spent more time walking to the podium than he did in his seat as he accepted ACMs, AMAs and CMAs.

She may not have realized it at the time, but Faith Hill blew into country music like a hurricane and has had us in a whirlwind of deliciousness since. As much as we love her handsome hubs, too, she did just fine with her solo projects, ?Faith? and ?Breathe.? In fact, those two projects alone sold 6 million and 8 million copies, respectively. But the most fun part was watching Faith go from the girl next door to a sweet but strong grown woman with empowered hits like ?Let Me Let Go? and fun romps like ?This Kiss.?

Shania Twain burst onto the country music scene in the 1990s with her belly-baring tops and her country-meets-pop tunes, and we were hooked. We still are! Heck, there isn?t a man or woman among us who doesn?t crank up the volume when ?Any Man of Mine? comes on the radio. While Shania did release three albums in the ’90s, it was just two that set her apart from the rest ? ?The Woman In Me,? which produced eight singles (four of which hit No. 1) and ?Come On Over,? which produced a whopping 12 singles and sold two-times Diamond. That?s 20 million copies!

It would almost seem that the phrase, ?I don?t really like country music, but I love?? was invented for Garth Brooks. In the 1990s, he converted more rock, hip-hop and pop music fans to country music than you could really keep track of. Sure, his songs were amazing and absolutely timeless, but his shows had the energy of arena rock, too! In fact, he set the standard for arena and stadium shows for country stars for years to come. He sold a few records, too. In fact, of the six albums he released in the ’90s, half of them are certified Diamond, so there?s 30 million sales, and the other three are nearing Diamond status. There were also over a dozen No. 1 singles, a couple of world tours and enough awards to buckle a trophy shelf. No wonder he needed a break. And thank goodness he?s back.

Erin has got more on these great artists of the ’90s, so be sure to watch that video. We?ll have more special edition Rare Country?s 5 videos and our weekly news, so check back in for all the news and fun in country music.