Couples Are Throwing ‘Balls Voyage’ Parties To Celebrate Getting A Vasectomy 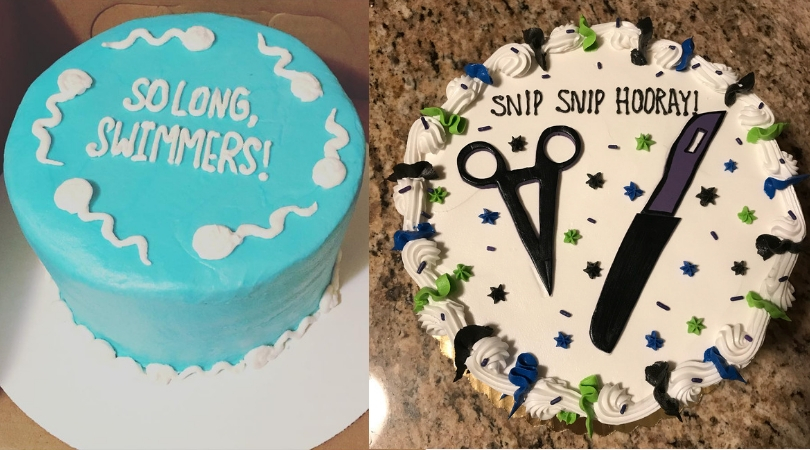 Kimberly Hemperly is now the mom of the year after hilariously planning a party for her husband, but not for what you think. After watching The Real Housewives of Orange County, the mom decided to throw a “Balls Voyage” party, creating her own ball themed party to honor her husband’s vasectomy.

What exactly does a “Balls Voyage” include? Everything from DIY “balls and sausage-related food” (mini sausages, frozen peas, ding dongs, the works!), a cake with a sperm headstone that says “Snip Snip”, and a “Retirement” shirt for her husband. The brilliant mom also made customed “swim team survivor” shirts for their two children.

Hemperly shared a Facebook post showing off how they celebrate getting a vasectomy, which has now gone viral causing the world to start having their own parties. Her post read, “We have an announcement to make! We are thrilled to say we will NOT be adding any more tiny humans to our family! My husband is taking one for the team and to celebrate this momentous occasion I felt the need to throw him a little ‘Balls Voyage’ party for his upcoming procedure. Because omg Y’all, nobody is more excited about this than me.”

I have to admit, this is hilarious! This couple should just get the ‘Parents of the Year’ award because I have NEVER heard of vasectomy parties. Hemperly said the party was a surprise bash for her husband, who came home from work to find their house consumed with vasectomy themed gifts. Her post has gathered over 45,000 shares and it’s easy to see why. Just when we thought it couldn’t get worse than gender reveals parties.

Surprisingly enough, Hemperly isn’t the only mom who celebrated her husband. Leah Randall also hosted a celebration of her own, with a cake that trend, “Snip Snip Hooray”, because congratulations are just out of the question.  She stated she wanted to celebrate her husband’s vasectomy since he was “taking one for the team.”

And in case you were wondering if people actually a do this, they do. Searching around Instagram, I was pretty surprised to see how many cakes people have made! It’s truly an American dream, I love social media. What do you say, should Vasectomy parties be a thing?

V Day ☆☆☆☆☆☆☆☆☆☆☆☆☆☆☆☆☆☆☆ A vasectomy party isn't a weird concept right?? 😜 Thought I would show some appreciation and have a laugh about it too.. 😆 Thanks to some of our good friends it was a hilarious surprise and all in good fun. The cupcakes went down a treat 😂 ☆ ☆ #vasectomy #vasectomyparty #cupcakes #funnycupcakes #hilarious #vday #snipsniphooray #feminism #3under4 #mommemes #happyfamily #myfamily #babiesofig #takingthepiss #senseofhumor

A post shared by The Bearded Baker Nashville (@thebeardedbakernashville) on Mar 8, 2019 at 4:25am PST

Editor’s note: This article was originally published on June 19, 2019.