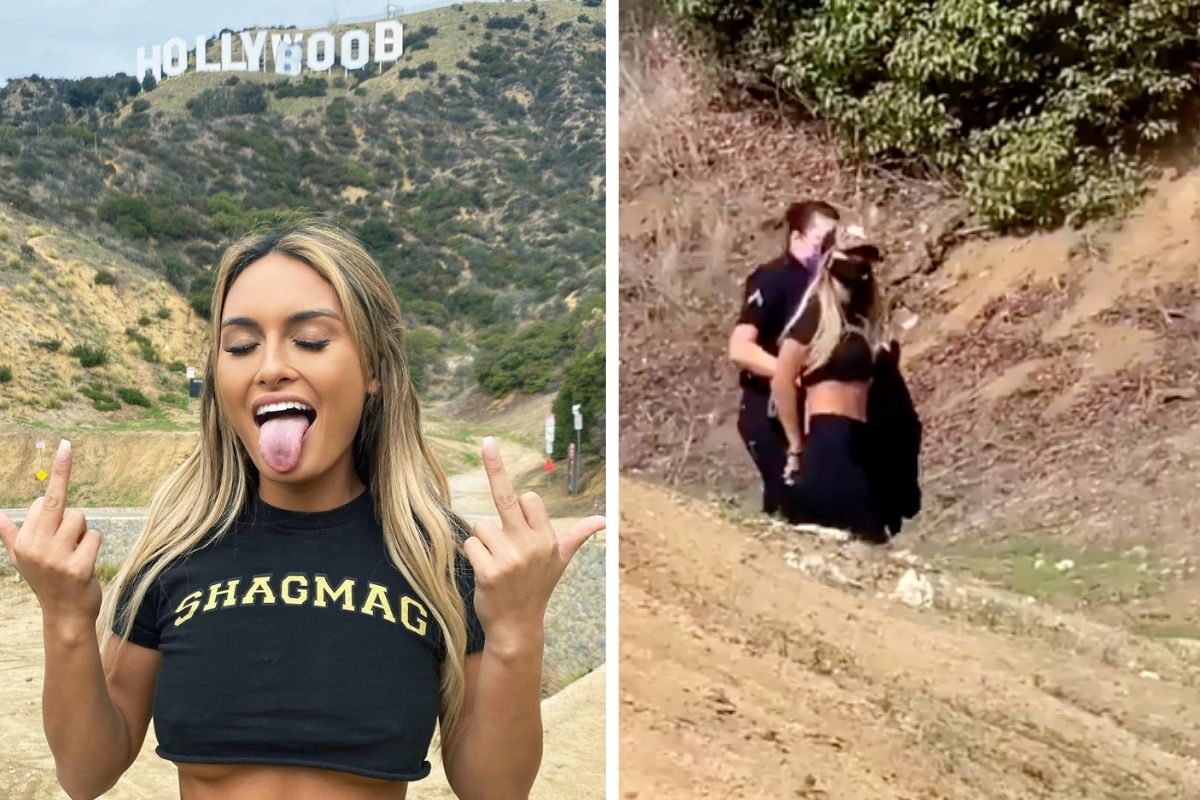 LOOOL. This is funny, this is really really funny. I want to meet this woman because she has now become an A-lister in my book. Six people have apparently been arrested after the iconic Hollywood Sign in California was altered to spell “HOLLYBOOB,” according to the Los Angeles Times. The sign was apparently adjusted on Monday with a large tarpaulin letter “B” over the “W” and a line passing through the “D” in order to transform it into a “B.” Yes, the talent and the patience it must have taken them is immaculate.

So, who is responsible for this whole confusion? None other than publisher and influencer Julia Rose. In case that name sounds familiar to you, yes, she previously shot to fame back in 2019 after she decided to flash a baseball pitcher during the 2019 World Series. Yep, so this was basically no biggie for the flasher. Not only that, but she decided to tweet about the incident claiming full responsibility for the mashup.

I mean she already flashed the whole world on live TV, so yeah I would totally expect this from her. Why not? Power to her and her…twins. But as funny as this is, it’s also really wrong since it is a U.S. Landmark, so I can see both sides of the story.

Los Angeles Police Department officers told authorities that they spotted a group of five men and one woman on surveillance cameras, and then intersected them on their way back down the hill. Police stated that the pranksters, who have not been named, claim that they did their stunt as a way to raise awareness for breast cancer. Since the sign was not permanently altered or damaged, police arrested the group for misdemeanor trespassing and then released them.

that one time I changed the Hollywood sign to #hollyboob pic.twitter.com/IrIC6DpXHO

The Hollywood sign, which is not accessible to the public, is now managed by the Hollywood Sign Trust. Trust chair, Mark Panatier, released a statement of the incident, noting, “Through the efforts of LAPD’s Hollywood Division and the Park Rangers in Griffith Park, the Sign’s security and video monitoring system stopped vandalism today.”

He apparently also told the Los Angeles Times that changing the sign was very disrespectful no matter what the cause was. Captain Steve Lurie, LAPD’s commanding officer, tweeted about the incident as well, noting, “Los Angeles landmarks are precious to those of us @LAPDHollywood and this was way uncool.”

Police stated that they will now intensify their security around the sign following the incident. Not surprisingly enough, this isn’t the first time that the sign was altered. Back in 2017, a 30-year-old artist had conveyed his own message on the sign by making several changes do it. He decided to swap the to “O’s,” making the sign say “HOLLYWEED.” You got to love California.