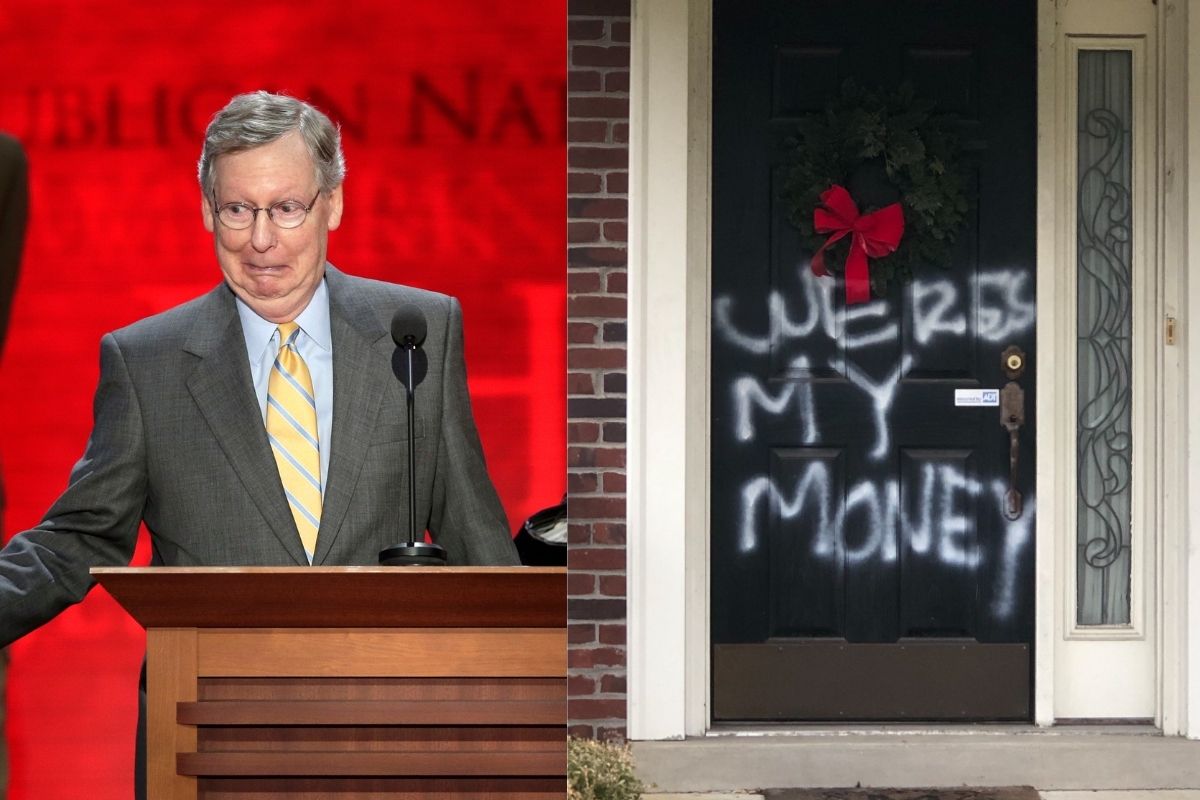 People were not subtle in expressing how they felt that Senate Majority Leader Mitch McConnell did not pass the $2,000 stimulus checks bill, and even with a few spelling errors, the message was still clear. The Republican senator’s Kentucky home in Louisville, was covered in red and white spray paint, with words that read, “Weres my money,” which we’re all sure is meant to say, “Where’s my money,” and “Mitch kills the poor.”

NEW THIS MORNING: The home of ⁦@senatemajldr⁩ was vandalized. Messages in red and white spray paint are covering the front porch area. The rest of the home appears to be untouched. ⁦⁦@WDRBNews⁩ pic.twitter.com/pBa1Kq8kqe

As of now, the Louisville Metro Police Department doesn’t know who is responsible for the vandalism when the graffiti was discovered early Saturday morning. But with the way the words are written all over McConnell’s home, we know that the vandals were throwing such a “radical tantrum” that they just might’ve happened to misspell a word or two on his front door. However, McConnell’s home wasn’t the only place that got hit.

For the second time within a year, House Speaker Nancy Pelosi’s home in San Francisco, California, was hit pretty hard as well. The black spray paint read, “Cancel Rent!” and “We want everything,” across her garage door with a fake pig’s head so strategically placed underneath and fake blood pooling out across the driveway. So much for a peaceful protest, even though it’s odd that her house was vandalized, considering she was the champion of the $2,000 coronavirus relief stimulus check bill.

Her house was hit earlier last year when a man decided to videotape himself going number two in that same driveway. I hope for her sake, that she has that driveway deep-cleaned often.

As the world is still on lockdown in fighting the COVID-19 pandemic, President Donald Trump had also advocated for $2,000 stimulus checks, rather than the proposed $600. However, after McConnell put a stop to that bill, Americans are now starting to receive the $600 checks, many finding the money in their bank accounts after New Year’s Day. McConnell said in a statement, “I’ve spent my career fighting for the First Amendment and defending peaceful protest. This is different. Vandalism and the politics of fear have no place in our society.”