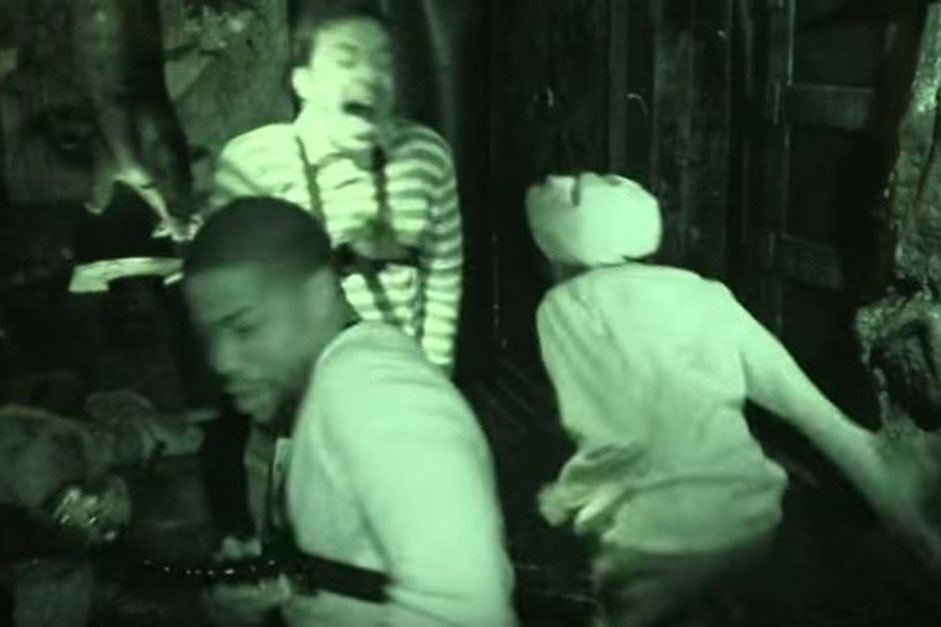 For a fun Halloween bit The Tonight Show host Jimmy Fallon and comedian Kevin Hart wandered their way through Blood Manor, New York City’s scariest haunted house. And these poor guys were freaked out at every turn. While it wasn’t funny to them, it sure as hell was funny to us!

The NBC late night TV show has always benefitted from fun guests and bits like when a zookeeper brings in weird animals, but field trips with A-list comedians might be even better. And fortunately for the viewers few people are as good off the cuff as Kevin Hart. The whole experience was a roller coaster of fright and laughter.

“Hey, Jimmy, I farted,” Hart admitted as they wandered through a dark hallway. As if it couldn’t get any worse, right?

The pair were terrified over and over again by jump scares and weird characters, though they might have had their worst time of all in the pitch black tunnel they had to walk through as “ghouls” and “monsters” reached out to grab them.

But when the crazed chainsaw man screamed and yelled in their faces, both men were unimpressed.

Kevin Hart isn’t Scared of Anything

The guys made it out alive, and Hart took the time to remind everyone of one thing:

“If you guys watched this and at any point it looked like I was afraid, remember, I’m an actor.”

All in all it ended up being a happy Halloween segment for the two comics, even if Hart might have needed to change his pants afterward.

This story was originally published October 14, 2016.

RELATED: Jimmy Fallon Paid the Ultimate Price When He Lost a Game of ?Would You Rather? Against Kevin Hart