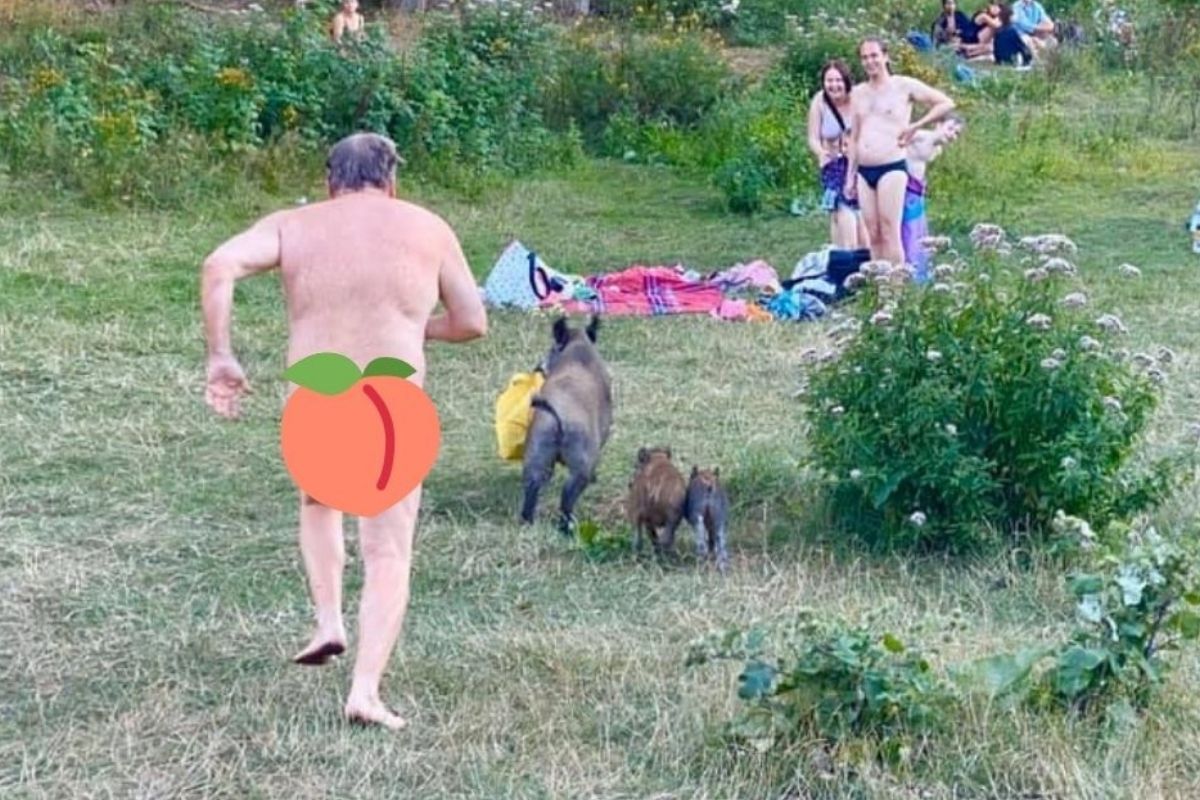 Man, oh man, this is by far one of the best things I have seen this year. This dude is seriously having the worst year of his life, and this just proves it. People at a lake in Berlin, where visitors are known to bask and bathe in the nude, got quite the view that day. Teufelssee is a popular bathing spot in Germany where people celebrate Freikörperkultur, translated to “free body culture.” So, out of nowhere, a middle-aged nude man was seen literally chasing down a wild boar while yes, completely naked for the world to see his private parts. My gosh, I would have killed to be there because that must have been a well good laugh.

Apparently of boar and her two piglets had been pursuing the area in search of food. So after reportedly consuming some leftover pizza that was sitting on the ground from the backpack of another naked sunbather, who was swimming in the lake at the time, the pig then moved on to a bright yellow bag. Basically, the little piggies thought that there must have been some sort of food inside, and took advantage that no one was watching it.

But, what happened next is surely out of a horror movie, or a comedy, I guess it’s up to you to decide that. Thanks to a visitor who was there that day, Adele Landauer, we have pictures of the whole “wild boar hunt”. She wrote on Facebook, “nature strikes back,” along with several photos showing the naked man running several smiling onlookers watching. Because well, there was no way to help that man, this bag was a goner.

The Facebook post, (which was approved by the nudist, don’t worry) noted, ?In the yellow bag is the man?s laptop, so he gave it his all in Adam?s costume. All of us adored him for how focused he stayed and when he came back with his yellow bag in hand we all clapped and congratulated him for his success. This happens when you?re focused on your goals.?

Apparently, the cheeky boar had finally contained by a cardboard box that was on the ground, and the man clapped his hands and hit the ground with a stick which prompted the bore to drop the laptop bag. Apparently, when he returned from the forest everyone started to cheer him on, because well he had won his battle.

If I was there, I would definitely applaud him too. But hey, if you see someone running around the street naked while chasing an animal that has something in his mouth that you know is not his, try and help that person out. It’s tiring trying to chase a dog around your house, imagine chasing a pig into a forest. Come on people, let’s help each other out a little bit. I will say, this man has a good sense of humor for allowing the internet to look at him in all his glory.

Editors Note: This article was originally published on August 7, 2020.