Steven Tyler Refused to Rank His Band Members, so James Corden Made Him Eat Cow Intestines 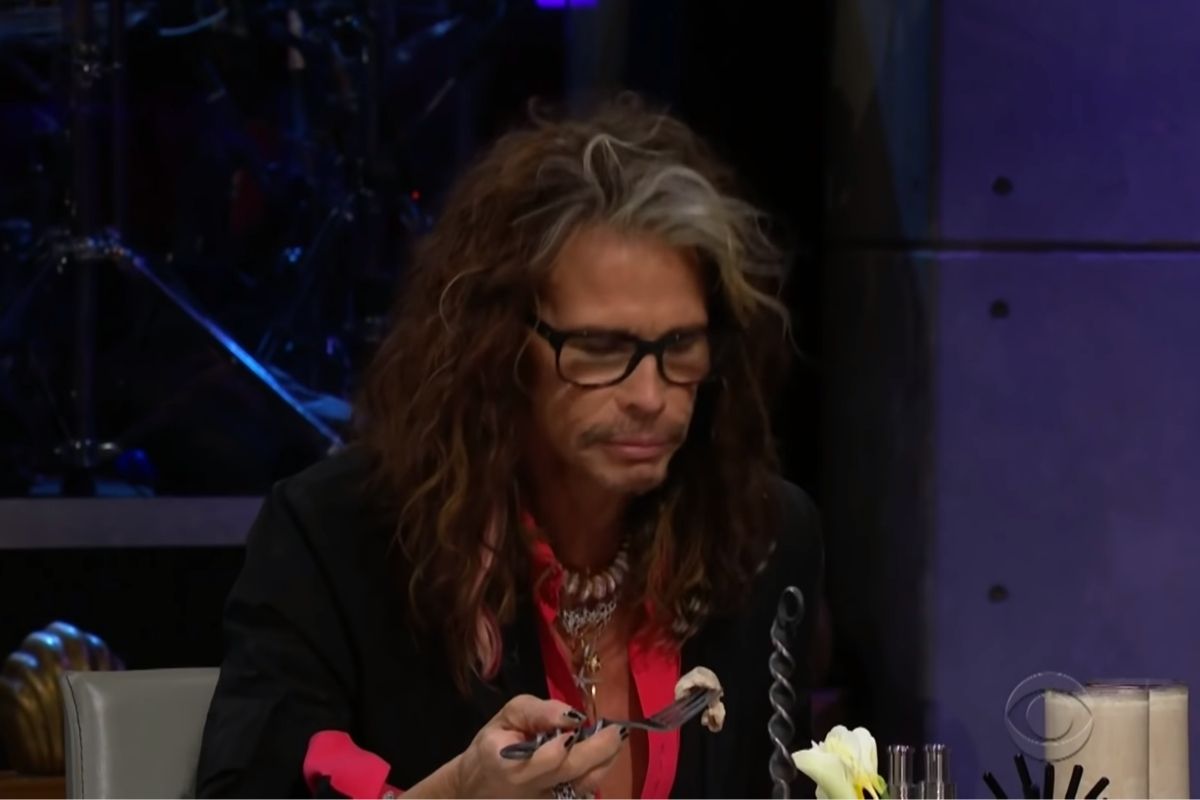 I love everything about Steven Tyler. I’ll admit it, I’m a little bit obsessed, but hey, everything he does is pretty much phenomenal. I mean, have you heard of Aerosmith? That band is Iconic. Growing up with them was the best thing that could happen to me because it influences a lot of my music taste. So, when I saw that he had been a guest star on The Late Late Show with James Corden, I knew it had to be gold. If you’ve never seen The Late Late Show with James Corden, you’re seriously missing out, because he has some good segments including Carpool Karaoke and Late Late Live Tinder. For this one, Corden invited the rock legend to play a game of “Spill Your Guts or Fill Your Guts.”

If you’re unfamiliar with it, it’s pretty much exactly what the title suggests. Corden and a famous contestant ask each other hard-hitting questions and then either of them has to answer honestly, or then pass and eat one of the horrible foods that are in front of them. It’s so gross, but it’s so entertaining because it really brings out the honesty in a person. He has everything from thousand-year-old eggs, hot sauce, bull penis, pig head jelly, Vienna sausage juice, dried caterpillars, lamb tongue, sardine smoothie, and cow intestines. Safe to say that none of us would like to be sitting at that table. But what the funniest things about this interview is how Tyler even brought his own silverware and some seasoning because well, he knew what he was getting into and wanted to be prepared. Not gonna lie, but just looking at these dishes really made my stomach turn.

So during the clip, Corden and Steven Tyler go back and forth asking each other questions. Corden’s first question was how much money the rocker has spent on drugs. In case you’re wondering, it’s $2 million! I have to say that I really wasn’t shocked at this, I mean it’s Steven Tyler we’re talking about here, I totally believe it. Adding onto his joke, Tyler noted, “ I snorted half of Peru.” You really have to hand it to him because he’s owning up to his mistakes and has even been very vocal about his past issues with drug use.

Corden also a singer if you had ever hit on any of his daughter’s, Liv Tyler, famous friends. To which of course the Aerosmith frontman answered yes, admitting that he actually hit on Cameron Diaz. Sorry Tyler, Diaz is already married to another rocker. Everything was fun and games, until one specific question. In which he refused to answer, meaning he had to eat cow intestines. Yep, he refused to rank his members of Aerosmith in order of talent and opted to eat the intestines instead. A brave brave man, but I get it. Tyler has always been very respectful and caring when it comes to his bandmates, so of course, he wasn’t going to rank them. I have to give it to the writers of the questions though because these were some hard ones.