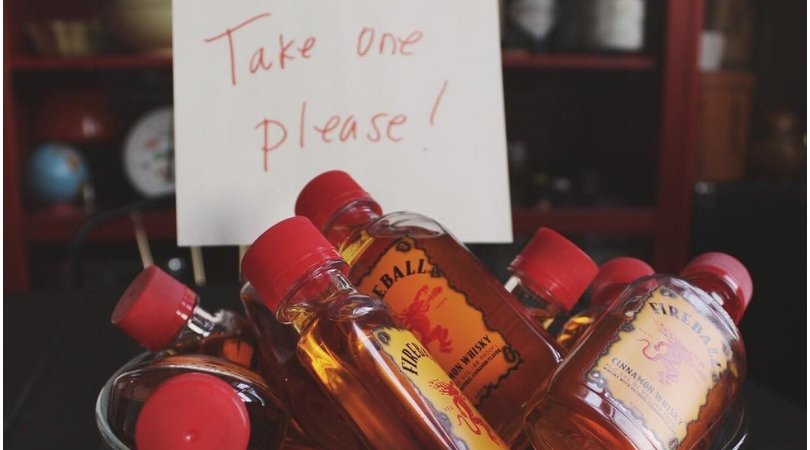 Kids these days truly truly amaze me. So much so, that I never really know what to expect from them. Especially from teenagers who want to look cool in front of people, like this 13-year-old from South Carolina. Turns out, a student is facing charges after getting drunk at school and passing out mini bottles of whiskey to other students. The shame and the punishment he is going to get after this is a scary thought.

According to the Union County Sheriff’s office, deputies were called early Friday to Sims Middle School in Union, about a student who appeared to be extremely drunk. The 13-year-old was reportedly vomiting and losing consciousness in the nurse’s office and was immediately taken to Union Medical Center.

The school’s principal said upon learning that the student was acting a “little odd”, she searched his book bag and found nine empty Fireball Cinnamon Whiskey mini bottles, a half-empty bottle, and two unopened bottles. YES, this kid was basically carrying around a liquor store that contained whiskey that can pretty much burn your stomach off! Seriously, I’m in my mid-twenties, and I can’t drink Fireball because if I do, my stomach ends up feeling like hell is about to erupt from there. It’s awful. Imagine a 13-year-old consuming that! My lord, so many questions.

Deputies stated that the teenager has also given a number of bottles to other middle school students, but were able to quickly recover four unopened bottles, and made sure students had not consumed anything.

So where did this kid get the bottles? None other than good old Grandpop. The 13-year-old had taken the mini bottles from his grandfather’s home, which the poor man was unaware of. Until police called to confirm if the bottles they were his, of course. The teen was charged with public drunkenness and possessing liquor at school and was released into the custody of his mother.

Which is pretty terrifying if you asked me. If I were the cops, I wouldn’t let this kid go home, because he is going to get the spanking of his life. This kid will never see the light of day. He will only go to school and back, and do it all over again. Say goodbye to your friends for a little while, kid.

This article was originally published on April 17, 2019.

Watch: Can Alcohol Affect Your Heart?