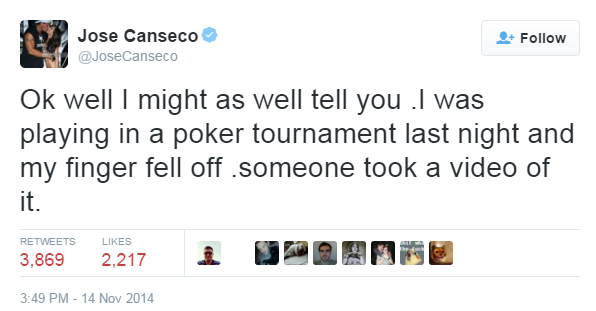 Whether or not you are in favor of guns, everyone can agree that gun safety is not something to joke about.

However, these examples of unlucky/clueless gun accidents might still tickle your sense of humor – or at least reinforce the need for careful gun usage.

According to the local newspaper, Gregory Dale Lanier, 35, of Frostproof, Fla., was driving his truck when his dog kicked a .380 pistol that was on the floor, causing it to discharge. Lanier “heard a boom, saw smoke and felt a burning in his leg.”

The police determined that the shooting was accidental.

2. It wasn’t a good idea the first time, either.

David Counceller, police chief of Connersville, Ind., has accidentally shot himself not just once, but twice.

In 1999, he shot himself in the hand while cleaning his service weapon. In 2014, Counceller suffered another self-inflicted wound. This one happened when his sweatshirt jammed against his 40-caliber Glock’s trigger as he attempted to holster the weapon. He was examining a new Glock at a gun shop at the time.

“I need to pay more attention,” Counceller reportedly said. “I know what the dangers are. It was pure carelessness on my part.”

In October 2014, Canseco’s former flame, Leila Knight, reported he was sitting at a table in their home cleaning the gun when it went off. The bullet allegedly tore through the bottom part of the finger, and he eventually lost it.

He bounced back, though, eventually tweeting. “You only really need 4 fingers on each hand to do everyday things. 5 on each is just a novelty.”

You only really need 4 fingers on each hand to do everyday things . 5 on each is just a novelty 👍✋☝🖕🤘

It wasn’t a suicide attempt that landed 23-year-old Jack Hugh Reid in the hospital in January 2015. Instead, the documented Norteno gang member of Redding, Calif., was playing with a homemade gun when it went off, firing a 12-gauge round into his face.

Investigators said Reid’s “zip-gun” was made from PVC pipe. He was hit in the left cheek, left eyelid, and left hand with birdshot. He survived, but was charged with possession of a zip gun and methamphetamine.

5. There’s a first time for everything.

The first time a coroners’ court came up against the newfangled problem of a fatal shooting accident was 1519, when a woman in Welton near Hull, England was accidentally killed by a handgun. The perpetrator was a bookbinder named Peter Frenchman. The victim, not understanding this noisy gadget, walked in front of the gun as it was fired.

While sitting in his car at a gas station in Macon, Ga., a man attempting to put his gun in its holster instead shot himself in the penis.

The man, who was not identified by police, drove to a friend’s house, where he removed his clothes to find that the .45 bullet had “exited out of his buttocks,” an epiphany he probably came to as “[t]he spent round fell onto the floor.”

As it turns out, he’s just one of six men who’ve shot themselves in the penis over the last five years alone.

7. Someone really wanted a day off.

In 2014, the Idaho State Legislature passed a law allowing gun owners to carry concealed weapons on college campuses across the state.

Two months later, Byron Bennett, an assistant chemistry professor at Idaho State University, shot himself in the foot with his legally concealed small caliber handgun. Bennett had been toting the pistol around in his pocket when the gun apparently went off.

Idaho State University president Arthur Vailas later said, “When they passed this law, it was bound to happen.”

After the Civil War, Ohio lawyer Clement Vallandigham was a successful lawyer and politician. In 1871, he defended Thomas McGehan, who was accused of shooting one Tom Myers during a bar fight. Vallandigham’s defense was that Myers accidentally shot himself while drawing his pistol from a kneeling position.

To convince the jury, Vallandigham decided to demonstrate his theory. Unfortunately, he grabbed a loaded gun by mistake and ended up shooting himself! He died the next day, but his client was acquitted – only to die four years later during a gunfight in a saloon.

9. Don’t shoot things that will fight back.

In 1982, roommates David Grundman and James Joseph Suchochi decided to pack up their guns and go wandering in the desert, just west of Lake Pleasant, Ariz. They were going “cactus plugging”  – shooting the giant saguaros with shotguns.

Grundman shot a small saguaro in the trunk, and it fell to the ground. “The first one was easy!” he cried, according to Suchochi. He next chose bigger prey – a 26 foot-high, 100-year-old behemoth. After he shot, a four-foot spiny arm, severed by the blast, fell on Grundman and crushed him.

To date, this is the only known instance of revenge killing by a plant.

10. This show is a little too realistic.

Tombstone has a long history of colorful characters – a past the town now mines with cowboy reenactments for tourists. It can bring back the days of the Wild West…sometimes a little too well.

In October 2015, Ken Curtis, an actor in the town’s Helldorado Days event, was shot in the leg by another actor, Tom Carter, who had arrived late to the show and had not had his weapon checked. Of course, the shooting happened in front of the O.K. Corral.

Another person was also injured, and other live rounds were found in the walls of local businesses.