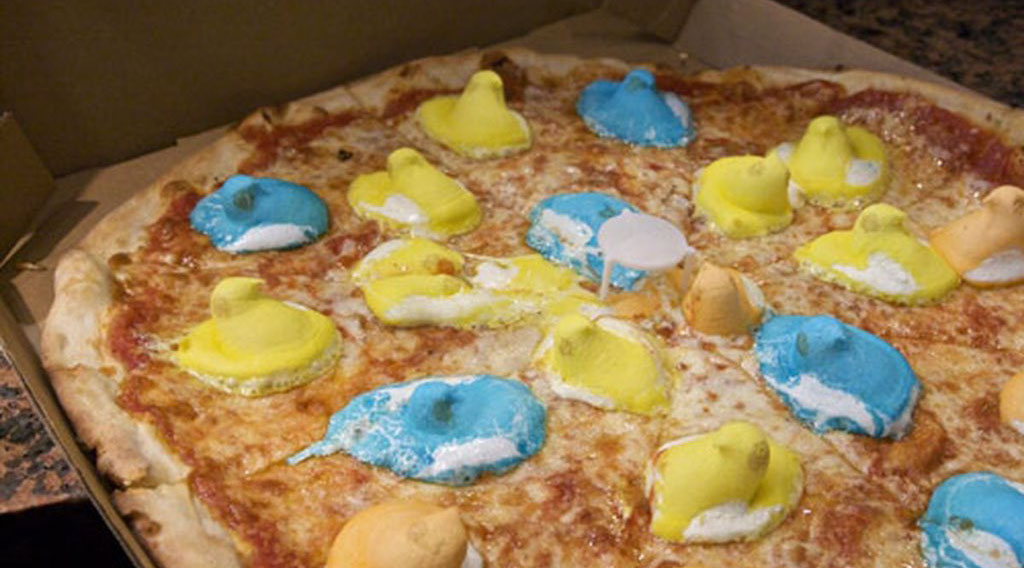 What did pizza ever do to these people? Who is so rabidly Italophobic that they’d desecrate one of Italy’s greatest contributions to the world like this? Even Pizza Hut thinks this is obscene, and they’re probably currently testing a beef-jerky stuffed crust pizza that’s deep-fried in bacon fat and requires you to sign a waiver that says Pizza Hut isn’t responsible for any damage done to your toilets. It’d be less offensive to the Italian people if you hucked dirty diapers at the ceiling of the Sistine Chapel or hooked the Leaning Tower of Pisa to an F-150 and took that diagonal bastard all the way down.

Putting Peeps on a pizza is a cruel, disgusting abomination. It would be more acceptable to poison your bird feeder and toss all some sparrows it killed on a pie instead.

None of this is okay. We cannot allow this behavior to be normalized. Jail those found responsible. Without a trial. This is such a travesty to food that it would be more ethical to raid a charitable food pantry and use its food store for a bonfire.

This is not an acceptable celebration of Easter. Jesus loves everyone, but not every thing. This Peepza is a thing. And a Jesus Christ hates it.

Maybe next we can put candy canes on a hamburger. Or chocolate syrup on a hotdog. We, as a society, officially have too much. Too much of what? Everything. If socialism ever takes hold in America it will because of arrogant, disastrous celebrations in excess and waste like this. This is a “Let them eat cake” moment for the age of Instagram. We’re just making up food, laughing, and throwing it in the trash, pretty much. The Peepza makes the largest bucket of nachos you can buy at a NASCAR race look sensible.

Watch: KFC is Testing Out a Cheetos Sandwich