I’m going to need everyone to stop what they are doing and give a round of applause to this woman. 38-year-old Melissa Morris decided to protect her dog at all costs by literally punching her boyfriend. She chose the dog over the man, as one always should, and by the look of her mugshot has no regrets.

According to authorities, the woman told deputies he punched her boyfriend twice in the face “because he left her dog outside in the rain.” Authorities quickly responded to Miller Road in Myrtle Point on New Year’s Eve for a report of an assault. The man told deputies that his girlfriend, Morris, had punched him in the face as the two spoke. Authorities noted the man had a marble-sized welt and a scratch mark on his right eyebrow.

So, naturally, the Oregon woman was arrested and is now facing a fourth-degree domestic assault charge. She was transported to the Coos County Jail where she was booked and lodged. Coos County Sheriff’s Office decided to tweet a picture of the suspect, showing Morris flashing a big ol’ grin after being arrested.

In all honesty, can you blame her? This evil man left a poor dog in the rain, no blanket or anything. He should be the one that was arrested, not her. She was only protecting her child. This man should get some animal cruelty charges or something. How dare you treat a puppy like that! It isn’t just the fact that he left the dog out in the rain, rather his aggressive abuse on someone she considers family. Some people have no sense of love or compassion.

Authorities didn’t say if she was out on bond or not, but if she is, I say we all pitch in and pay it for her. Someone start a GoFundMe for this woman asap! 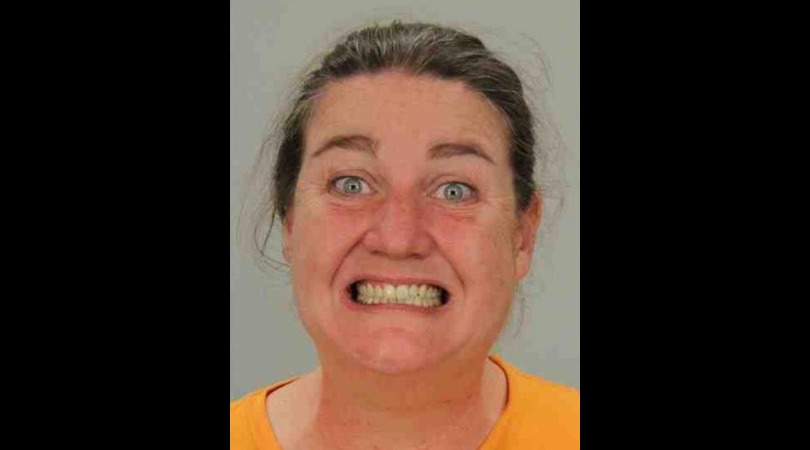