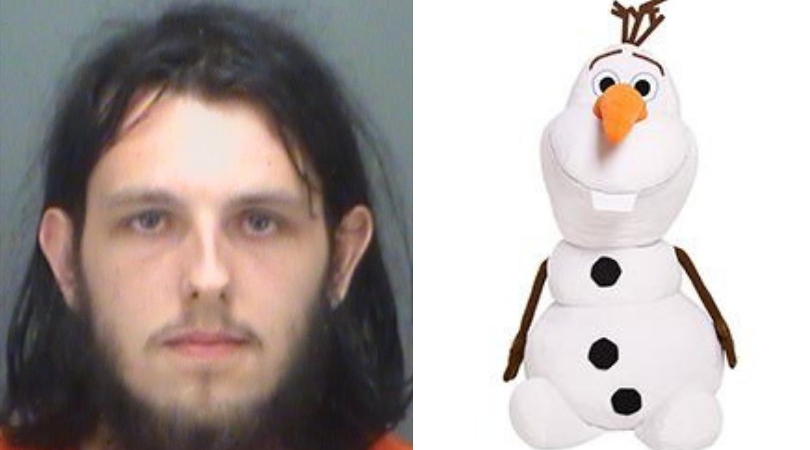 Yikes! This 20-year-old definitely took cuddling to a whole other level. The Florida man was arrested after being caught having sex with a stuffed animal in Target! Yes, you read that right, a STUFFED animal. Not just any stuffed animal, but poor ‘Olaf’ from Frozen. According to witnesses, Cody Christopher Meader took Olaf off the store shelves that featured several characters from the Disney film, set it on the ground, and then began to viciously ‘dry hump” the toy.

The police report stated Meader then ejaculated on the Olaf doll and decided to nonchalantly put it back on the shelf before he picked up another victim. This time, it was a large unicorn stuffed animal, and then began to have sex with it as well. So, the police obviously got there in a matter of seconds and quickly took him into custody.

Meader reportedly told authorities that he was just doing “stupid stuff” and admitted to the sexual assault. He was arrested and charged with criminal mischief. As far as poor Olaf and the unicorn stuffed animals, they were removed from the store and destroyed. Thank god, because nobody needs to see that!

Meader’s father stated that the kid has “history of this type of behavior,” but had no prior criminal cases. He was charged with criminal mischief and was booked into the county jail, later released from custody after posting $150. Now THAT is quite a conversation to have at the dinner table. This kid is so dumb, he could have just bought it and done his gross deed at home. But no, he just HAD to scare people at Target.