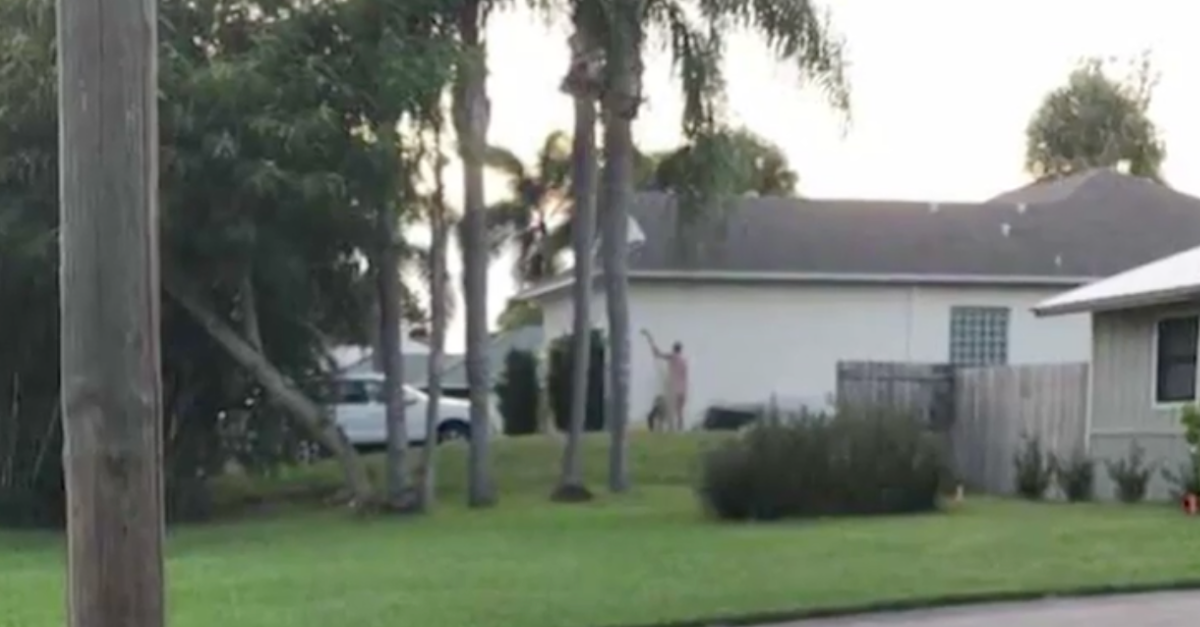 A Florida man who has been doing his yard work in his birthday suit has his neighbors upset because, apparently, they’ve forgotten they live in Florida and that this is probably the least terrible “bad thing” that could happen near their homes. There aren’t any Scientologists kidnapping children for a galactic slave army or bath salt addled demon hobos chowing down on faces. There aren’t even any giant lizards hanging out in a backyard because they smell small children that they want to eat. The only snake terrorizing the neighborhood is attached to this guy. Consider yourselves lucky, people.

The residents of the Stuart, Florida neighborhood say the man regularly does nude yard work and walks around his property a la natural, and that they’re not too happy the part of their neighbor’s body most resembling the state they live in is on full display as he works on his car in the front yard and pulls weeds. Several neighbors have called the police on the man but according to the law in that area, because the man is on his own property and is pulling weeds rather than himself, everything is legal.

In fact, what the man is doing is so legal that every time the Sheriff’s department has shown up at the behest of a distraught neighbor the man answers the door naked. The police are then, presumably after a long sigh, forced to explain that Florida law (of course) sides with the penis exposer, and must inform the naked man’s neighbors that if they don’t want to see this guy’s dong it’s on them not to look at it. It’s just the way of life it seems.

One neighbor was upset when she came outside Sunday night to put out the trash and saw her neighbor naked, bent over, and winding up his hose (his hose in this instance being the one he uses to water his lawn, making everything legal). There’s no doubt the view of the neighborhood is extremely interesting for people making a shortcut through the neighborhood.

Neighbors have expressed concerns over the neighborhood kids seeing the naked man’s genitals but, really, if they cared about their children not being exposed to wildly inappropriate things they wouldn’t be raising them in Florida.

WPBF attempted to interview the naked man but he declined to comment, stating that he and his family are private people, because of course, they are. Nothing says privacy more than doing yard work naked.

This story was originally published September 19, 2018.