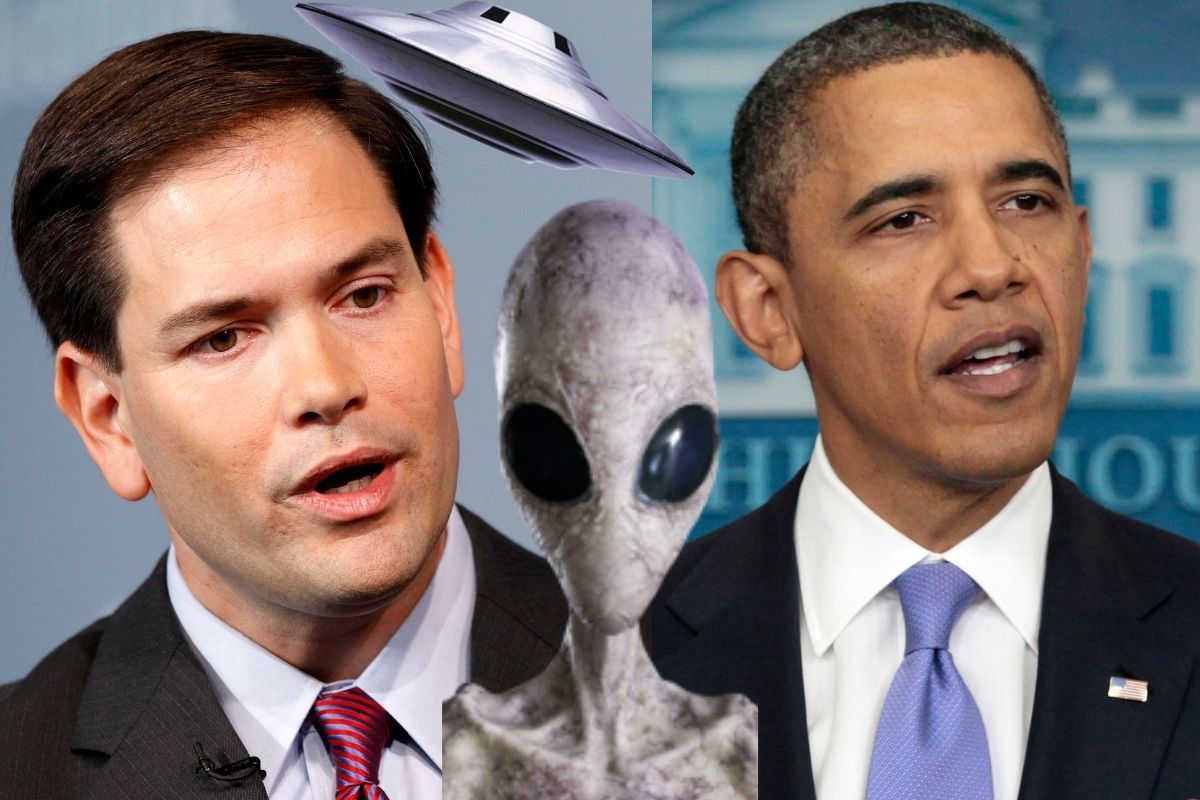 Last night on The Late Late Show with James Corden, former president Barack Obama said, point-blank, “There are some things I can’t tell you” in regards to the existence of aliens. And while this is certainly breaking news for UFO enthusiasts and truthers, the acknowledgment is part of a larger trend. In the past year, many government officials have broken their silence on the once-taboo topic.

Barack Obama Speaks Frankly About UFOs on a TV Show!

On The Late Late Show with James Corden last night, musician Reggie Watts asked Barack Obama about, simply, “dem aliens.” The broad question left Obama open to address any extraterrestrial conspiracy theories as he saw fit. After a moment of floundering, Obama said firmly “There are some things I can’t tell you on air.” But instead of changing the topic, he went on, describing his own wonder with the topic. When ascending to that highest office years ago, Obama remembered asking the intelligence agencies whether there was a “lab somewhere” (Roswell?! Area 51?!) full of alien spaceships and specimens. Disappointingly, Obama said the answer was no.

But, he pointed out quite seriously, there is indeed a surplus of footage that shows “objects in the sky that we don’t know exactly what they are.” By now we’ve all seen those mysterious videos: unexplainable masses zipping and zooming through the night. And according to Obama, that’s being investigated.

This is the first time a former U.S. president has spoken with such candor about, arguably, the biggest conspiracy in our universe.

Late last year, Obama appeared on The Late Show with Stephen Colbert to promote his memoir A Promised Land. During that interview, Colbert pressed Obama on the topic of UFOs and while Obama admitted that he “certainly asked about it,? the conversation ultimately ended with a curt ?Can?t tell you? from the former president. (Colbert took that as a yes though, joking that Obama was a bad poker player: “You just 100% showed me your river card!”)

It was a far cry from the recent openness Obama showed Corden. So what’s changed? Well in the past year, UFOs have become much more than a fringe theory; their existence is now discussed rather than debated. And so far, speaking about UFO sightings seems to be embraced by Democrats and Republicans alike.

Sen. Marco Rubio: “There Is a Stigma”

This past weekend, 60 Minutes aired a segment dedicated to UAPs (unidentified aerial phenomena) and the new onslaught of relevant information. According to the introduction by CBS correspondent Bill Whittaker, “The Pentagon now admits there’s something out there, and the U.S. Senate wants to know what it is. The intelligence committee has ordered the director of national intelligence and the secretary of defense to deliver a report on the mysterious sightings by next month.”

Whittaker spoke to officials from the Navy, the military, the defense department, and even congress. Marco Rubio, the high-profile Florida senator frankly shared his experience of pushing for further investigation into UAPs. As head of the intelligence committee, Rubio asked Pentagon for an unclassified report on what Rubio called an apparent “threat” in the “airspace.”

He went on about the report, which is due next month, saying:

“We’re gonna find out when we get that report. You know, there’s a stigma on Capitol Hill. I mean, some of my colleagues are very interested in this topic and some kinda, you know, giggle when you bring it up. But I don’t think we can allow the stigma to keep us from having an answer to a very fundamental question.”

Rubio’s surprising comments were trending this week… until Obama’s appearance on The Late Late Show began to dominate the news cycle.

At the end of April, The New Yorker published a long-form piece, “How the Pentagon Started Taking U.F.O.s Seriously.” Like the 60 Minutes segment, the mainstream publication is indicative of our now-collective acceptance — even comfortability — with UFOs. The article spotlights an old story about Former Nevada Senator Harry Reid’s own experience struggling to obtain information as the Senate Majority Leader.

Talking to The New York Times in 2017, Reid spoke of an alleged UFO crash. ?I was told for decades that Lockheed had some of these retrieved materials. And I tried to get, as I recall, a classified approval by the Pentagon to have me go look at the stuff. They would not approve that. I don?t know what all the numbers were, what kind of classification it was, but they would not give that to me,” he said, referring to Lockheed Martin, the American aerospace defense firm.

Other US Government Revelations

In mid-April, Pentagon spokeswoman Sue Gough said in a statement to CNN that a Navy video taken in 2019, which was leaked online last year, does indeed display unidentified aerial phenomena, or, what most Americans refer to as UFOs: unidentified flying objects. (The terms are now used interchangeably.) The video shows, most noticeably, something blinking and triangular moving through the nighttime clouds. Gough acknowledged that three unidentified flying objects were photographed: one spherical, one ?acorn?-shaped, and one looking something like a ?metallic blimp.? Gough added:

?As we have said before, to maintain operations security and to avoid disclosing information that may be useful to potential adversaries, DOD does not discuss publicly the details of either the observations or the examinations of reported incursions into our training ranges or designated airspace, including those incursions initially designated as UAP.?

And that’s not all. Last August, the Unidentified Aerial Phenomena Task Force (UAPTF) was officially founded within the Department of the Navy, overseen by the Secretary of Defense for Intelligence and Security. The purpose of the UAPTF is to investigate military UFO sightings. The pyramid-like UAPs from the trending video, now confirmed by Sue Gough, are reportedly being included in such analysis and should receive a thorough review.

This is just one of many recent moves made to de-stigmatize discussions about UFOs and possible extra-terrestrial life. For decades, the U.S. government shied away from admitting any knowledge about possible UFOs. Now, thousands of pages of key documents have been unclassified and are up online for anyone to view on the Black Vault.

Former CIA Director R. James Woolsey sat down in April with the Black Vault founder John Greenwald Jr. to discuss his personal awareness of regular UFO activity. Another ex-CIA director, John Brennan, admitted on a podcast in December that it is ?presumptuous and arrogant for us to believe that there?s no other form of life anywhere in the entire universe.?

?There are instances where we don?t have good explanations for some of the things that we?ve seen, and when that information becomes declassified, I?ll be able to talk a little bit more about that? There have been sightings all over the world. And when we talk about sightings, the other thing I will tell you, it?s not just a pilot or just a satellite or some intelligence collection. Usually, we have multiple sensors that are picking up these things.?

“We May Not Be Alone. Whatever That Means.”

The existence of UFOs is now known to be a genuine consideration of our country?s military, intelligence agencies, the Department of Defense ? and likely NASA. Above, watch Luis Elizondo openly discuss on CNN some of the ?anomalous aircraft? he?s studied; Elizondo ran the Pentagon?s top-secret UFO unit from 2007 to 2012. For years, the substantial project which Elizondo managed was kept under wraps. It was only in 2017 that the Pentagon officially confirmed its very existence.

Elizondo reiterated his firm and informed position on UAPs in the new 60 Minutes special.