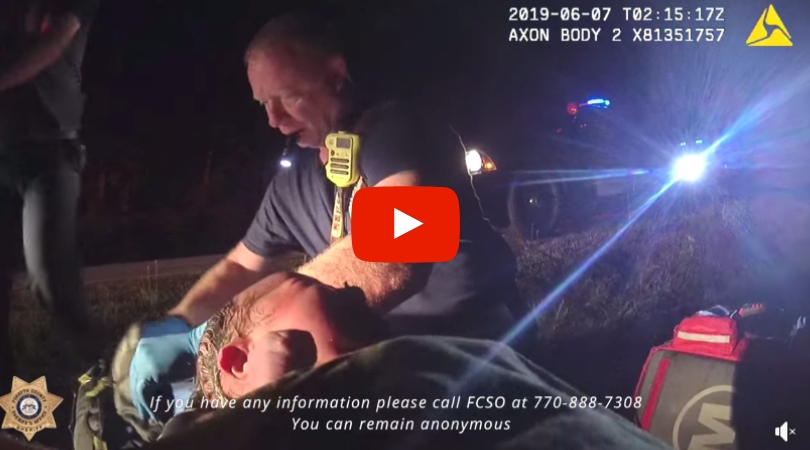 The Forsyth County Sheriff’s Office has released body camera footage showing the moment a newborn baby girl was found inside a plastic grocery bag in Georgia woods. The girl was found on June 6, but the video was just released through a Facebook post in hopes that someone will help them identify who the baby is.

Named “Baby India” by hospital staff, she was found by a Forsyth County Deputy after a resident called saying he heard the cries near their home. When the deputy arrived, he opened the plastic bag and found India crying and moving around with her umbilical cord still attached.

Body cam footage shows police officers quickly wrapping the crying baby in a jacket waiting for first responders. She was taken to the hospital where it was determined she was in good health and is now under the care of the Georgia Department of Family and Children Services.

The Sheriff’s Office continues to “aggressively investigate” and follow leads regarding the newborn, and thankfully are still receiving tips from across the country on the possible identity of India. The sheriff’s office released pictures of India in hopes that someone will come forward and help her find her mother.

It is still unclear whether the child’s mother will face charges. The State of Georgia currently has a Safe Haven law that allows any mother to leave a baby up to 30 days old with any medical facility or employee including any institutional infirmary, hospital, health center or birthing center in Georgia without prosecution. This includes Fire Stations, Police Departments, and Hospitals.

If you have any information regarding Baby India please call the Forsyth County Sheriff’s Office tip line at 770-888-7308. Callers have the option to remain anonymous.