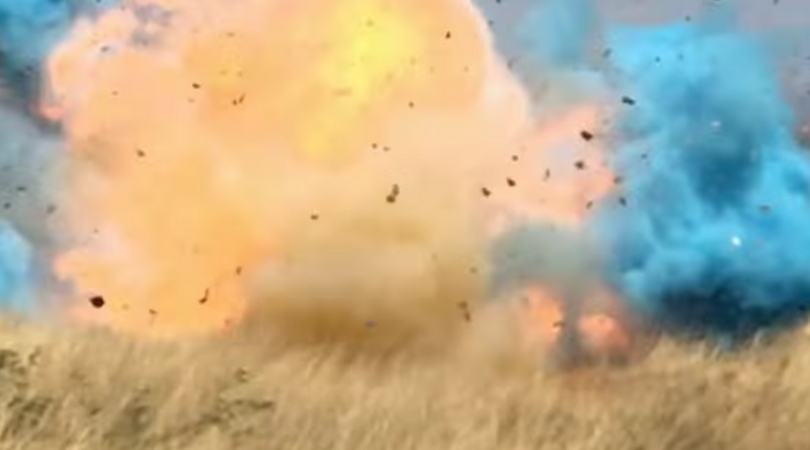 Don’t get me wrong, I love a good gender reveal party! It?s impressive how creative some of these parties get, whether it?s biting a cupcake to reveal if it?s a boy or girl, or popping a balloon, it?s exciting. Nothing pumps up the crowd like a good surprise. But sometimes these gender reveal parties get a bit out of hand. Like this one, which ended up costing more than college tuition for 5 children.

Back in April 2017, 37-year-old Dennis Dickey in Tucson, Arizona, was standing next to his wife ready to reveal if the couple was having a boy or a girl. That quickly turned sour when a ?natural? disaster ended up occurring, revealing more than what the couple expected, a wildfire explosion. The U.S Forest Service has just released the video of the Arizona gender reveal that sparked $8 million worth of damage and let me tell you, they were surprised, alright.

U.S. Border Patrol Agent Dennis Dickey revealed his wife was carrying a baby boy by shooting a target labeled ?BOY? and ?GIRL? on a wide open field full of tall dry grass. Bad idea, I know, but hey, spur of the moment, right? What the then off-duty Border Patrol agent didn?t know is that the target he shot also contained tannerite, a highly explosive substance intending for it to detonate when shot by a high-velocity firearm bullet. Tannerite is a name brand explosive that when shot with a high power rifle can produce water vapor and a ?thunderous boom.?

The video shows the target burst into flames along with blue powder filling the field of dry grass. The explosion quickly takes over the area, lighting what fire experts dubbed as the “Arizona Sawmill Fire”. In September, Dickey pleaded guilty to igniting the April 2017 fire, which burned more than 45,000 acres and caused more than $8 million worth of damage which required approximately 800 firefighters to control the blaze.

The off-duty U.S. Border Patrol officer immediately reported the fire and admitted to being the cause of ignition. Luckily, Dickey wasn’t charged with arson as he didn’t intentionally start the Arizona wildfire. But, according to the U.S. Attorney’s office in Arizona, as part of plea agreement, Dickey agreed to a five-year probation to make a public service announcement about the cause of the fire with the U.S. Forest Service and has also agreed to pay for than $8 million in restitution with an initial payment of $100,000.

Although he agreed on paying the $8 million restitution, it is still unclear whether Dickey will pay the full amount. According to experts, Dicey will make $500 monthly payments for the next 20 years, for a total fine of $220,000. Looks like the kid might have to wait off on college a bit.

Editor’s note: This article was originally published on November 27, 2018.

Watch: Woman Runs Into Raging Wildfire to Save Badly-Wounded Koala