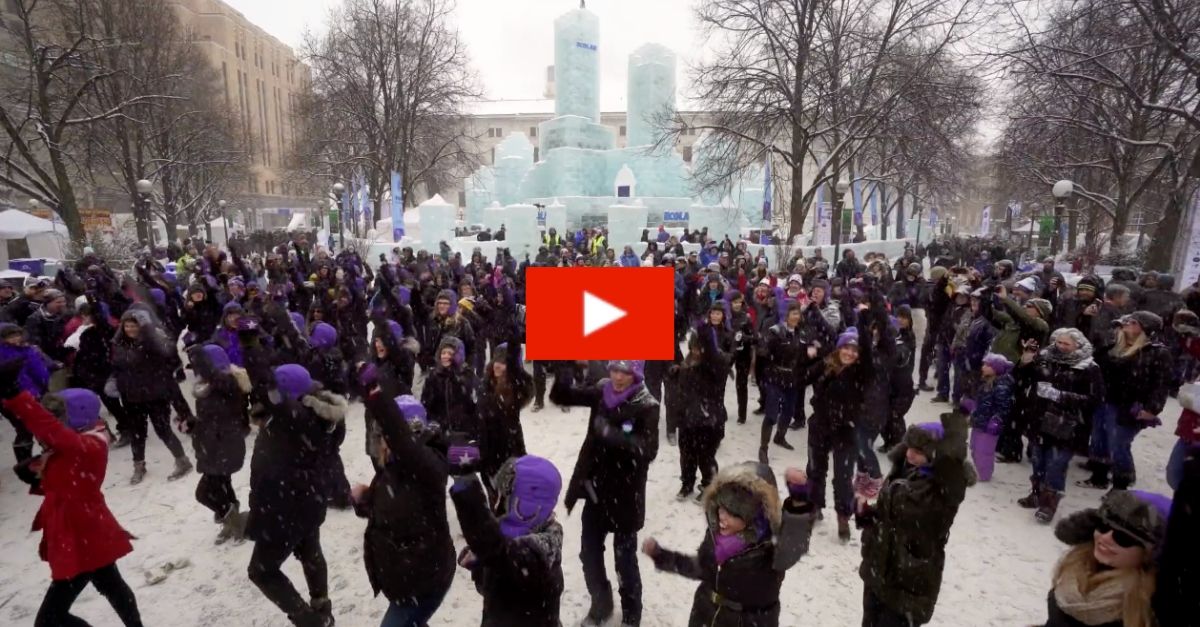 On February 3, 2018, in St, Paul, Minnesota, a town 15 minutes outside of Minneapolis, people from all over the country were enjoying their cold afternoon at the non-profit Saint Paul Festival and Heritage Foundation’s annual Winter Carnival festival in Rice Park. As snow softly fell, suddenly loud chants of “USA!” began to break out, and a group of over 50 people in the exact same purple bomber hats had somehow already gathered together by the 70-foot ice palace.

“Let’s Go Crazy” by Prince started playing through loud speakers, and these people in purple bomber hats started to dance in unison as the crowd made space to watch them. What were they doing? They were surprising the festival with a Prince flash mob dance.

Medtronic employee Jenny Wood organized the flash mob, with the help of Bill Hermann who shot the video. Choreographer Katie Ressie helped the group rehearse the routine. They got the idea to plan the flash mob dance as a tribute to Prince while volunteering for the Super Bowl, which was held in Minneapolis the day after that year. The group also wanted to give Super Bowl visitors insight on how they embrace winter in Minnesota, including their native “Skol” chant in their performance.

Prince, considered as one of the greatest musicians of our time, was born and raised in Minneapolis. The late music legend, who would’ve celebrated his 62nd birthday on June 7th, was not only known for his wide variety of music styles(funk, R&B, rock, new wave, soul, psychedelia), but also highly honored for developing a subgenre of funk rock that integrated synth-pop and new wave elements called the “Minneapolis sound.”

Named after the late musician‘s hometown, the Minneapolis sound defined pop music in the late 70s. And according to the Rolling Stone Album Guide, “the Minneapolis sound… loomed over mid-’80s R&B and pop, not to mention the next two decades’ worth of electro, house, and techno,” explaining how the sound Prince created developed over the decades.

The Saint Paul Festival and Heritage Foundation‘s mission statement is “to foster a sense of community, pride, belonging and connectedness by celebrating Saint Paul’s unique history and emerging heritage through fun and educational experiences.” Things have been intense in 2020 with the coronavirus pandemic hitting the world the way it did. And on top of that, with the intense change that have also been happening in the city of Minneapolis, I’m sure the state of Minnesota is looking forward to their upcoming 135th Saint Paul Winter Carnival, set to be held on January 28– February 7, 2021.