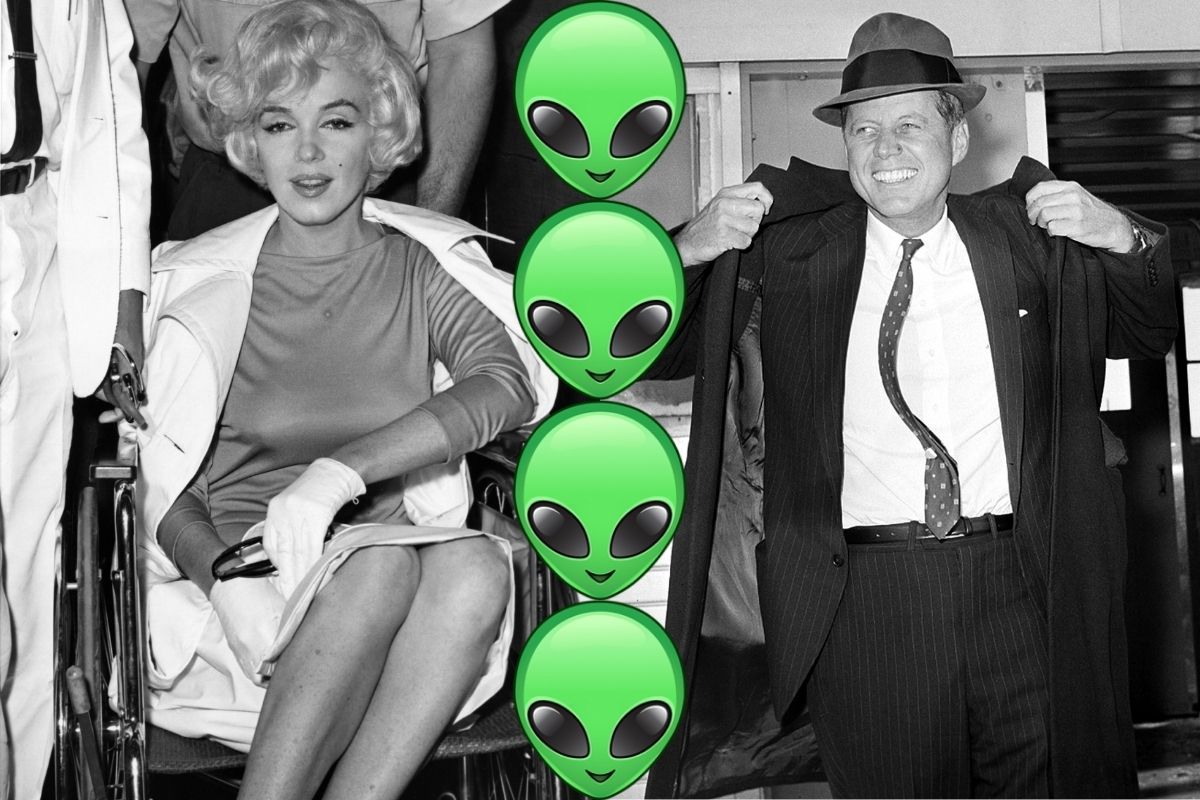 Since last year, the news has been dominated by UFO disclosures coming straight from our government. The navy has released multiple videos of surreal floating objects, former intelligence officials are speaking out, and even Barack Obama has some intriguing tidbits to share! It’s fascinating enough, but what if the secrecy also has a touch of Hollywood glamour? Investigator Nick Redfern’s new book Diary of Secrets: UFO Conspiracies and the Mysterious Death of Marilyn Monroe posits that the blonde bombshell might have known about extraterrestrial life… and paid the ultimate price for it.

Prolific author and noted conspiracy theorist Nick Redfern has written 60 books on topics like UFOs, monsters, and other paranormal phenomena. But his latest work connects that netherworld of cover-ups back to beloved actress Marilyn Monroe. Check out the Amazon description below which hints at the high-class world of UFO secrecy. If that doesn’t sound like the perfect paperback, I don’t know what does.

Cold-hearted murders made to look like suicides and accidents. Classified government documents fallen into the wrong hands. Explosive diaries. Powerful people with dangerous agendas. Government people prowling around. Hollywood conspiracies. Frightened people with disturbing secrets to hide. Wild sex. Drugs. Crazy parties and flowing booze. At the very heart of it all, an amazing story of UFOs, aliens, Roswell, Area 51, and the life and death of a beautiful, but scarred, icon: none other than one of the most famous and loved actors of the 20th century: Marilyn Monroe.

The Murder of Marilyn Monroe?

Marilyn Monroe was discovered dead, in her bed, on August 5, 1962, after overdosing on barbiturates. She was 36 years old. Countless theories concerning the demise of the beloved icon followed: that her death was intentional, that she was naked, that she was murdered. In the end, Monroe?s premature death was ruled a probable suicide. She’d long struggled with mental health issues and drug abuse. In the next month, suicide rates doubled in Los Angeles.

But what if that self-destruction was staged? Could the takedown of Monroe have been a full-on assassination? When discussing the death of Monroe, the murder of President John F. Kennedy just one year later often goes unacknowledged despite the couple’s high-profile affair. Now Nick Redfern has looked into those connections on an investigation that’s led him to eerie FBI documents, and possibly, the uncovering of a UFO crash.

Redfern suggests that Monroe was silenced after learning about the existence of aliens through her relationship with JFK. And it’s a captivating theory. But where’s the evidence?

Friends of Monroe have said that the late President likely discussed serious government secrets with his famous girlfriend — namely regarding alien sightings and a top-secret desert base full of otherworldly materials: Area 51. And while that might sound like mad speculation, newly released documents from the CIA and the FBI point to a clear preoccupation with the sparkly celeb MM. On vault.fbi.gov, an official website for the Federal Bureau of Investigation, there are about 200 pages of declassified FBI files on Monroe specifically. (Thanks FOIA!) Most interestingly, these reports — overseen by J. Edgar Hoover, detail Monroe’s likely relationship with Robert Kennedy, complete with hush-hush meetings and various hotel parties. Of course, Bobby Kennedy was eventually murdered too… just like his brother: Monroe’s other beau.

One of the declassified documents is called “A Study of Assassination.” It was written by the CIA around the time of Monroe’s death. According to Redfern, it states:

“How to murder someone with drugs, by throwing them off a building, etc, etc. And it looks like something tragic, but innocent. One of the most fascinating parts of this document is a reference finding, if you need to kill someone, get them in a vulnerable situation, maybe ply them with alcohol and drugs, and make it look like a very tragic, sad suicide. And it almost mirrors the final hours of Marilyn herself. It?s very, very similar. It?s like looking in a mirror. And you read that it really is difficult not to believe that the documents and Marilyn?s death were part and parcel of one.?

The star journalist (and acquaintance of Monroe) Dorothy Kilgallen also died of a barbiturates overdose, in 1965, after interviewing Jack Ruby and others deeply involved with the JFK assassination and Warren Commission.

Considering the CIA’s apparent interest in unconventional assassination tactics, it’s entirely possible that Monroe was helped toward her suicidal state. Speaking to George Knapp in an interview for Mystery Wire, Redfern pointed out that “The big question is, was it a suicide or was it almost like an allowed suicide? That?s one of the key theories the idea that she wasn?t sort of forcibly killed, but she was placed into death deliberately in the days or weeks prior to her death, that she was being deliberately pushed into sort of a mode of depression and anxiety to the point where she just could not stand this sort of psychological warfare anymore, and decided to kill herself.”

To pin that confluence of anxiety on our government might sound like a stretch. But considering the content of “A Study of Assassination,” this mentally draining tactic could very well have been utilized during an era of rampant political deception.

WATCH: Did LBJ?s Mistress Blow the Whistle on the JFK Assassination?