New surveillance footage of a bizarre grand theft incident that led to one man’s death has been released. Almost four years ago, a Seattle-Tacoma International Airport employee, Richard Russell, stole a Horizon Air Q400 aircraft and took it on what appeared to be a “joy ride.” An hour later, the plane crashed into an island.

The newly released footage shows Russell, 28, in the hours before he stole the plane and the moment when he flew off the tarmac. He was a baggage handler and therefore had clearance and access to tarmac and to aircraft towing vehicles.

In the footage, Russell is seen passing through security wearing a t-shirt that reads, “The Sky’s No Limit.” About five hours later, surveillance footage shows him towing the aircraft on the tarmac. He opens the cabin door, hops in, and closes the door as it’s still rolling

“Seattle ground Horizon guy. About to take off. It’s gonna be crazy,” he says over the radio before flying away.

Airport employees are captured on camera seemingly clueless of what’s going on. But the air traffic controllers catch on and immediately call for help. Two F-15 fighter jets took off from Portland almost as soon as Russell was in the air. Footage taken from the ground shows the jets chasing Russell unsuccessfully.

Soon after, Russell is heard saying, “Hey, I found myself in a predicament. I’m in the air right now. And just gonna soar around.”

Something About Russell’s Voice Sounded ‘Off’

Air traffic controllers tried talking to Russell and guiding him to safety, but Russell kept responding in a strange way. You can hear his voice sound very confident, but his words make it sound like he doesn’t want to find a way down and he has no intention to. The Seattle Times described him as sounding “excited…though also carefree and wild.”

When directed to a field, Russell responds, “Oh man, those guys will rough me up if I try to land in there. I think I might mess something up there, too. I wouldn’t want to do that. Hopefully—aw, they probably got anti-aircraft.”

“No, they don’t have any of that stuff,” responds air traffic control. We’re just trying to find a place for you to land safely.”

“Yeah, not quite ready to bring it down just yet but Holy Smokes,” Russell says. “I gotta stop looking at the fuel because it’s going down quick.”

“Ok, Rich,” says air traffic control. “If you could, if you start a left-hand turn, and we’ll take you down to the Southeast, please.”

“This is probably uh, like, jailtime for life, huh?” says Russell. “I would hope it is for a guy like me.”

Later, Russell says, “I’ve got a lot of people that care about me. It’s going to disappoint them to hear that I did this. I would like to apologize to each and every one of them. Just a broken guy, got a few screws loose, I guess. Never really knew it, until now.”

Soon after, Russell tells air traffic control that he feels like an engine is out. Control operators try to guide him over the water.

The F-15 fighter jets follow Russell over the water and then he nose-dives into Ketron Island, crashing the plane. Bystanders took footage of the chase from their ground vantage points, unaware of what was happening.

The FBI ruled the death as a suicide.

The Daily Mail has much of the footage collected in this article. 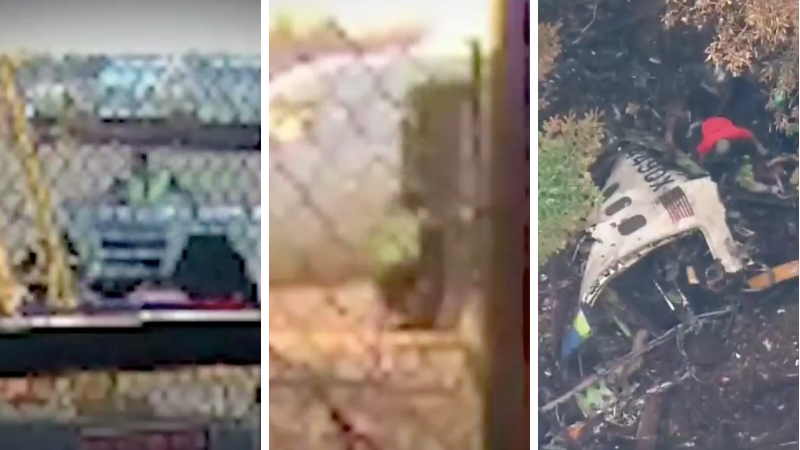