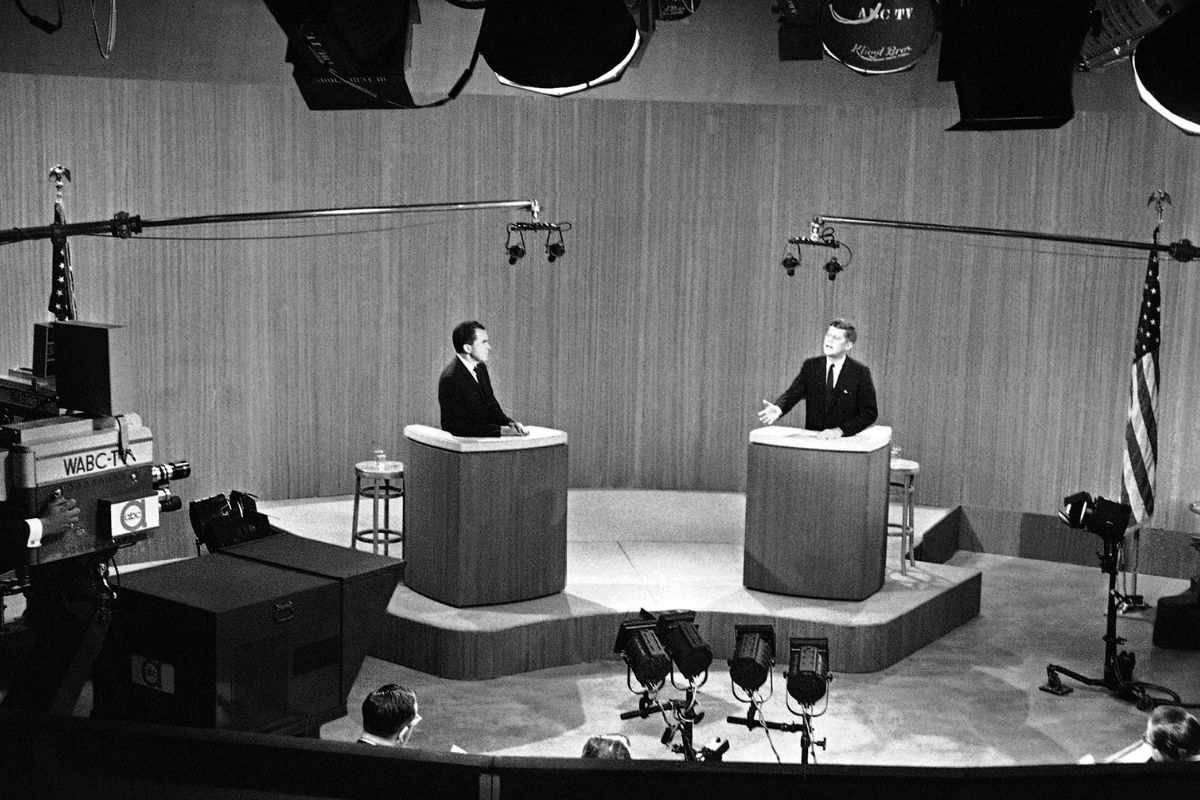 The first televised presidential debate is said to have been in 1960 between John F. Kennedy and Richard Nixon. This is technically only true on a technicality. Four years prior to the 1960 election, the Republican president of the United States Dwight D. Eisenhower was challenged by the Democratic candidate Adlai Stevenson for the presidency, but they didn’t debate in person. No, they had two women to debate for them as surrogates.

For the Democratic party, former first lady Eleanor Roosevelt spoke and for the GOP, Maine senator Margaret Chase smith spoke. The two women had a general respect for each other and a solid rapport. The presidency debate for that year was seen on the CBS program called Face the Nation. This moment was groundbreaking because it was the first time women had been seen on the program. The debate took place two days prior to the American general election. They discussed mostly foreign policy.

Now, the first time that the United States presidential candidates were actually on television debating with each other was for the 1960 presidential election. This one was between vice president Richard Nixon for the republican party from California.  His opponent was the Democratic nominee, Senator John F. Kennedy, a roman catholic from Massachusetts. They met in Chicago, Illinois, at a studio for the debate. This was the first of four debates. The winner for the first debate was clearly JFK, for the second two, the winner was Richard M. Nixon. He’d been the vice president for Dwight D. Eisenhower’s vice president for almost 10 years.

Now, he was running with Henry Lodge. On their final debate, the pair discussed foreign affairs. The election was three weeks later, it was one of the closest elections in both the 20th century and the United States’ history. Even though Nixon was favored to win, in the words of JFK, “Nixon may have debated Khrushchev, but I had to debate Hubert Humphrey.” And surely, the election results showed Kennedy’s victory along with his running mate Lyndon B. Johnson came in with a 49.7% in the popular vote, while Nixon received 49.6. In Chicago, Illinois, there were rumors that the Chicago Mayor Richard Daley stuffed the Cook County ballot box. Nixon ended up conceding on November 9, 1960. But later claimed that voter fraud was happening in Texas and Illinois. Nevertheless, Nixon did return for another chance at the White House with his presidential campaign against Lyndon B. Johnson after JFK’s assassination.