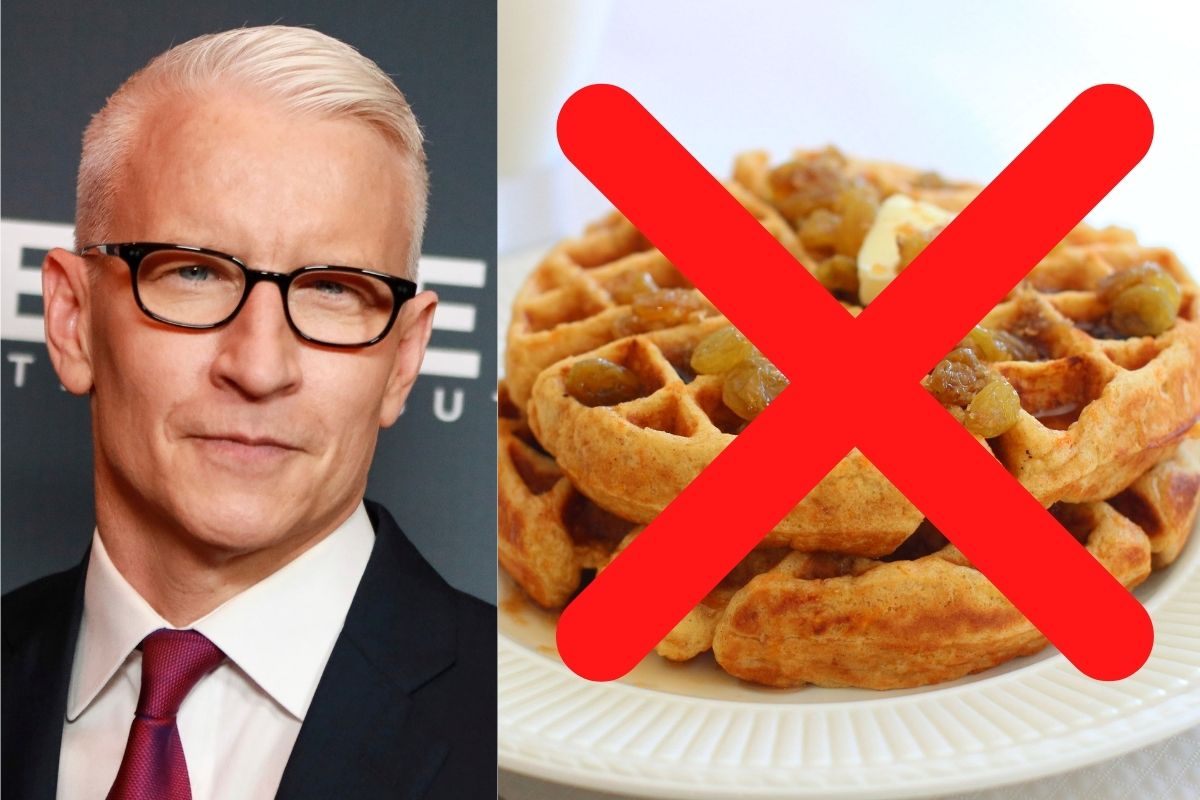 Anderson Cooper is a self-admitted PEA: picky eating adult. Despite his worldly upbringing as the wealthy son of Gloria Vanderbilt followed by an even more worldly career in journalism, Cooper does not indulge in cuisine of, well, any kind. He first admitted his fear of new foods in 2011. The bland details may shock you.

“I eat the exact same meal every day for months at a time. I’ve done this for as long as I can remember, it’s a way of having comfort and control in my life.”

Anderson Cooper came out as an adult picky eater for the first time ten years ago on his talk show Anderson. Speaking candidly, Cooper admitted that he doesn’t eat vegetables, avoids anything green, and in general, hates texture on his taste buds. He called the combination of peanut butter and honey “fancy.” (Clearly, Anderson Cooper has never had the munchies.) He doesn’t drink anything hot. He thinks cinnamon is a “big adventure.” And he’s divulged some disturbing patterns: namely, that he prefers to eat the exact same meal for months at a time — even a year!

For four months straight, Cooper ate a turkey plate, dry, from Boston Market every single day. In 2015, he told Vanity Fair that eating was “a waste of time” but since he must, he likes oatmeal, salad, and salmon sushi — when he’s feeling daring. In 2018, he opened up to The Hollywood Reporter about preferring Soylent, the meal replacement drink, to just about any real food. But Cooper also has grappled publicly with the gravity of his own food issues. He is a “disordered eater” and recognizes that. He even is part of PEA groups online where he’s befriended like-minded individuals — and had some on his TV show. See below.

Since Cooper is so honest about his own quirky diet, fellow celebrities have tried to help him expand his horizons. Jerry Seinfeld took Cooper to try his first-ever waffle. Yes, Cooper, an international journalist extraordinaire, did not try a waffle until he was 44 years old! In 2013, Cooper even tried to conquer his fears with the ultimate foodie: Anthony Bourdain.

After Cooper admitted to Seinfeld that he’d never tried a waffle, the comedian took him to a Belgian waffle cart. That clip is no longer online, but you can read a record of their ridiculous conversation, below, and watch Seinfeld’s reaction above as a guest on Anderson.

Cooper: ?I don?t understand the point.?

Seinfeld: ?Texture! The point is texture!?

Cooper: ?But there?s pancakes and pancakes are good enough! Why do you need crispy??

Seinfeld: ?For the experience of eating! You are really weird!?

This surreal exchange of dialogue truly feels straight out of a Seinfeld episode.

Watch these CNN silver foxes dig into some yakitori — albeit uncomfortably.

Anthony Bourdain was a master traveler because he never judged anyone’s traditions or tastes. As Bourdain points out, food is a necessary branch between cultures and to avoid it is to avoid deepening your understanding of that place. Yet here, speaking to a notorious food-hater, Bourdain teases his friend only lightly. His encouragement for Cooper to sample the Japanese delicacy is genuine, without too much force. And for his part, Cooper is polite about the fare. Even if he’d rather be drinking a protein shake.

“Why couldn’t we just get regular chicken?”

Rest in peace, Anthony Bourdain. With his adventurous soul passed on, it might be up to the daring likes of Andy Cohen to get Cooper to expand his palette. Good luck.