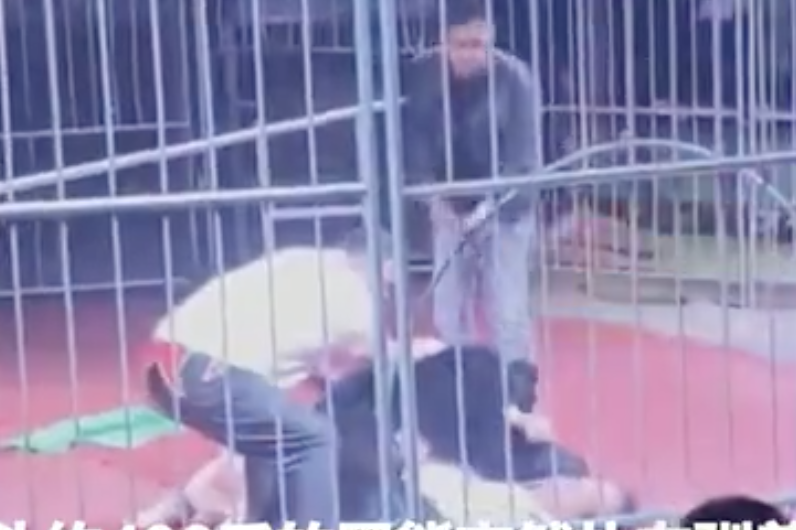 A circus bear was caught on video mauling its trainer in front of the audience during a show in Puyang, of the Henan Province in China.

The brown bear can be seen jumping on its trainer in the middle of the circus ring, in front of audience members, while another trainer hurries to get the wild animal off of his friend, using an electric shocker to move the bear away. The bear was separated from the audience area by caged fencing so fortunately, public safety was never an issue.

Usually, circus bear attacks news stories are kind of a Russian thing but, like Russia, China is a big fan of circus shows featuring trained wild animals doing tricks like walking upright on their hind legs and doing a wheelbarrow walk with the trainer.

Unfortunately for this trainer the bear had had enough of tricks and treats and decided it wanted a bit of him instead.

Over the years many a Russian circus show, from Moscow to the town of Olonets in Northern Russia, has seen a bear attack, perhaps most famously in 2019 when Yashka the bear attacked its trainer. A lot of different reasons are given for why an otherwise docile circus bear might get set off. Flash photography from audience members taking pics, old age and joint pain, or just the fact that they’re a freakin’ bear. (Probably nothing trumps that it’s a wild bear.)

Regardless, getting mauled by a bear when you’re a trainer forcing bears to perform tricks for crappy treats in a circus performance seems pretty inevitable. The only way you’d be more likely to get mauled by a bear is if you covered yourself in honey and meat and wandered around Lake Tahoe, California at night. You don’t exactly need a criminal investigation or some sort of investigative committee to figure out why it’s happening. It’s like wondering how you caught COVID after letting everyone at a New York bodega spit in your mouth.

Here’s a new policy idea: don’t dance around in cages with pissed off bears, whether you’re in Texas or the Republic of Karelia. Otherwise you might want to get the name of a good plastic surgeon. It’s going to take a Beverly Hills MD to fix those bite wounds.

Watch: Dog Finds Huge Sex Toy in Park, Runs Around with it For 15 Minutes as Dog Walker Chases Him