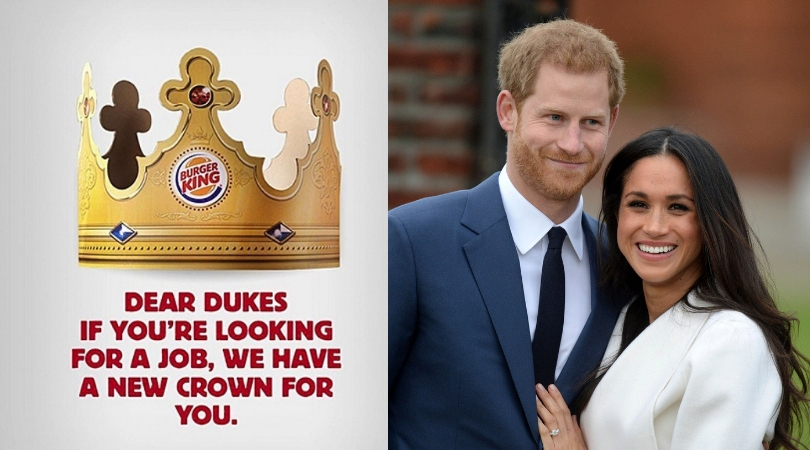 Talk about good quality trolling. Burger King hilarious joked on social media, offering Prince Harry a job after he and Duchess Meghan Markle announced their intention to step back as senior members of the royal family. Taking advantage of the situation, Burger King decided to stir the pot, and mock the duo by offering them a paper crown instead. Smart move if you ask me, the whole internet is now talking about them. Great marketing.

In case you have no clue what is going on in the United Kingdom, the royal couple announced their intent to work to “become financially independent” and pursue charitable causes. The Duke and Duchess of Sussex have decided to split their time between North America and the UK.

Burger King branches in both the U.S. and Argentina joked around on twitter offering Harry the title of “Burger King,” which is hilarious in itself. Because well, they aren’t just mocking them stepping down, they are also mocking the fact that Harry was probably not going to become king anytime soon. Burger King Argentina began the trolling last week with an ad campaign asking both Harry and Meghan to become part-time Burger King team members, too.

The job offer stated, “Dear Dukes, you can look for your first job without giving up the crown.” Another ad tells the royal couple, “If you’re looking for a job, we have a new crown for you.”

“We found out that the prince and the duchess decided to give up their roles in the royal family and will work to become financially independent. So, we have a proposition for you: Do as thousands of people and take your first steps in the world of work with us. You know that the crown will suit you perfectly.”

The fast-food restaurant then joked that after so many years of living as dukes, it was time for them to start eating like kings. Now, I don’t know about you,  but I’m not really a Burker King fan. So to me, eating a whopper isn’t really like eating like a king, but okay. Maybe there are people out there who live for these burgers.

Burger King U.S. followed up days later reminding Harry that “This royal family offers part-time positions.” As expected, several Twitter users were very quick to praise the restaurant, while others called the company “savage.” Which I totally agree with. I mean yeah, it’s a joke…but too soon, Burger King. Too soon. McDonald’s would never do this.