It looks like Captain America wasn’t being very American. A man dressed head to toe in a hilarious and unflattering Captain America costume was caught breaking into a Mississippi home shed, by a property owner who turned out to be the real hero. The alleged burglar, 36-year-old David Hobbs was seen pouting on a bench as he was getting cuffed at a police station in Clarksdale.

Hobbs is still wearing his mask, pulled up onto his head with a pair of handcuffs dangling in between his legs. Oh, but that’s not all. To complete his elaborate costume, the faux-muscled superhero was also wearing a pair of fairy wings when he burgled the shed at 3 in the morning. So, it seems to me like this man had a very wild night, drank too many shots of tequila, and decided to celebrate Halloween in September. You know, just the usual.

A man dressed as Captain America with fairy wings was held at gunpoint by a former Marine corrections officer after allegedly breaking into a shed. https://t.co/d43nJuAtEk

How did Captain America get caught? Well, the alarm in the shed started going off which alerted the homeowner (who is a former Marine corrections officer) and went to investigate, while holding a handgun. Who’s laughing now, Cap’? So, there was the man dressed in a suit realizing he had messed up and was quickly taken into Coahoma County jail on a $25,000 bond. But, not surprising enough, the Mississippi Department of Corrections confirmed that Hobbs is already on probation for a grand larceny conviction.

Props to the Clarksdale police officers at the station for snapping a photo of him. It’s pure gold, really! Maybe next time he should assemble the Avengers so they can be on the lookout while he ‘s out at night robbing the place? Or you know, maybe actually put it to good use and save the world. It would sure save him a lot of embarrassment. Marvel, I think we found Chris Evan’s body double. 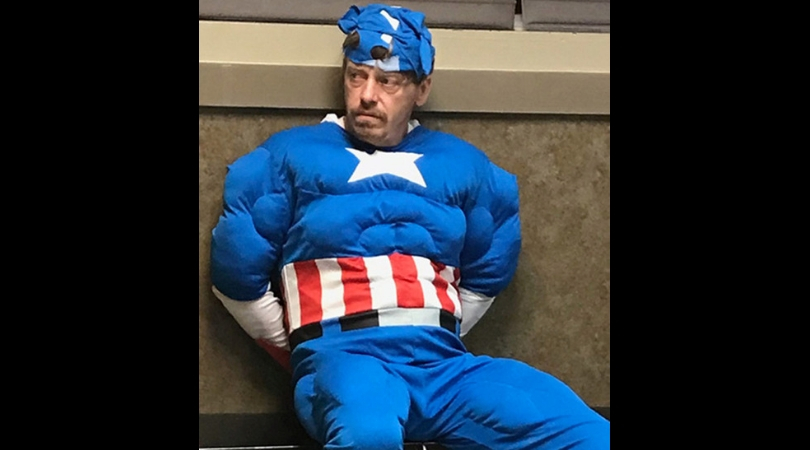