Siblings. It’s a never-ending game of who gets the last pizza, who gets to choose what to watch, and the never-ending amount of pranking. You see if I have learned something in my lifetime, as the younger sibling myself, is that sometimes, the best pranks are the ones that are planned out to the bone. Ensuring the prankster is well, blissfully unaware of what is about to happen. This is exactly what this family from North Carolina did.

13-year-old Sammy was born into a family that is shockingly really good at keeping their straight face while carrying out the funniest, yet cruelest practical invisible prank of all. Invisibility. The family recorded Sammy sitting down on the sofa beneath a sheet that was being held by his older brother. He believed his brother was performing a magic trick on him and was going to turn him invisible. Like any 13-year-old would, Sammy went along with it and it and trusted his big brother. Once the sheet was lifted, Sammy heard the roars and shocking exclamations from his family members. Yes, rassuring him that indeed, his brother had actually made him invisible. The teen had no idea he was actually being pranked, and well, his siblings were being just that, siblings.

Norma Gutierrez, Sammy’s sister-in-law, stated they saw the hilarious prank going around the Internet. This after a guy in a park had been tricked into thinking he was invincible. The show Magic For Humans on Netflix stars magician Justin Willman and worked with the audience to help him pull off the trick in the viral video. Working together, the two guys in the video actually believe they are invisible. It is the most hilarious thing I have seen in a while. (Check out the video below)

The family decided to try it on her little brother because they knew naive, little Sammy would fall for it.  According to Gutierrez, the family planned the prank on a Sunday. Taking a picture of her husband brothers next to the couch beforehand, to shock Sammy when they showed him the picture they had taken during the prank. Which, after seeing the so-called picture you can see Sammy clapping his hands with pure delight. He shouts “oh my gosh!” Things became even better when the family member started asking Sammy to hold objects such as Gatorade bottle and a bin, reacting to the ‘levitating’ items in mid-air. Oh Sammy, gullible, but kind at heart. I think it’s time you start planning your revenge very soon, buddy. The mind of a teenage boy is a funny one. 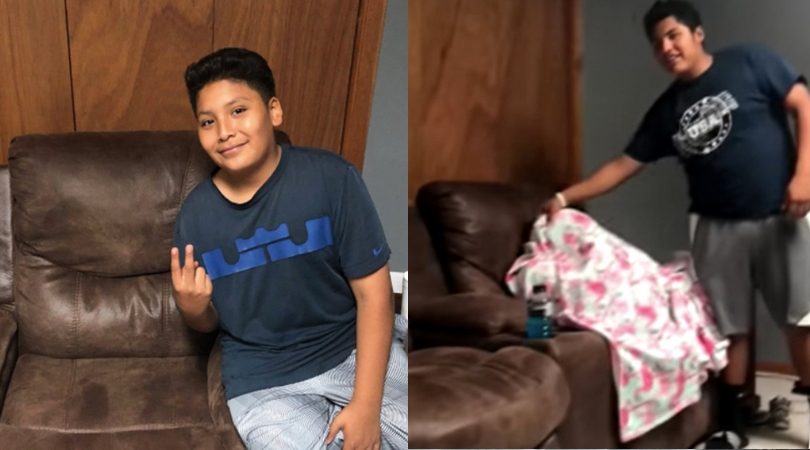