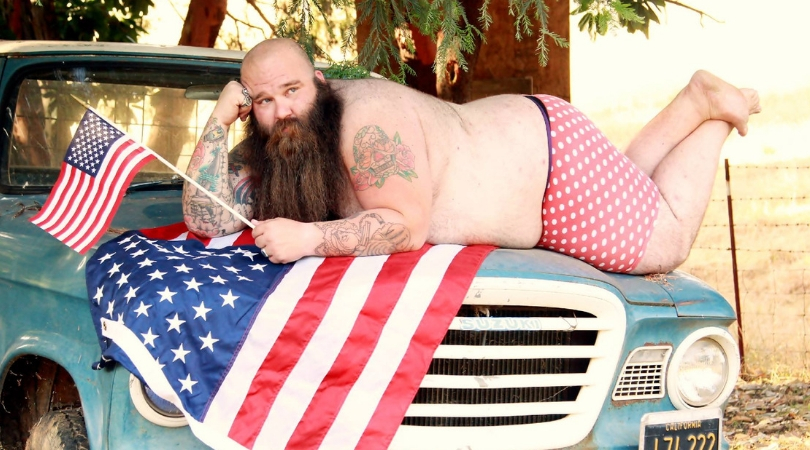 I’m all for the holidays. They give me an excuse to throw a big party, bake all the goods I can, and drink a few beers here and there. Especially when celebrating Independence Day, because who doesn’t like some good barbeque and fireworks. But this man, this man wins the prize for celebrating the Fourth of July the right way. How did he celebrate, you ask? Well, by grabbing an American Flag and posing for a hilarious yet fashionable “Dudeoir.”

In case you don’t know what a Dudeoir is, it is a male spin on the typical female “boudoir photography.” Which apparently is really popular here in the United State. This is definitely news to me, but hey, I’m not complaining. You do you. Which is why ‘Artistic Photography by Tami’ decided to capture Joshua Varozza, a bail bondsman, in all his glory wearing your typical country overalls and an American flag.

According to Tami, “The God Bless America “Dudeoir Country Collection,” was taken because “ladies can’t have ALL the fun in the land of the free.” Which is a great reason to make a man pose half-naked while covering himself with a tiny piece of fabric. What I found even more hilarious about his whole shoot is that Tami and Joshua are actually married, have been since September 2018.

The photoshoot was taken three years ago, and at the time of the shoot, they were only friends. But, falling for his talented modeling skills, they both decided to get married. Now that is one heck of a story! The question here is…was it the photoshoot that captivated Tami’s heart? We need some answers here, Tami. If so…nice going, Josh! You can successfully say that you captured a woman’s heart by wearing fashionable overalls. A man’s dream, indeed.

According to Tami, the photoshoot was made to bring joy to the internet in light of the political and sad news lately. Which I mean, it does exactly that. It makes you giggle here and there and has been breaking the internet ever since. The couple even created a calendar after several users begged them to make one, calling it the ?12 months of Hillbilly USA Goodness.” To help our their community, they decided to donate parts of their proceeds to their local veterans group, Wheelers for the Wounded.

I’m just going to go ahead and say it, men don’t do enough Dudeoir’s. Can you imagine what their children’s photo shoots are going to be like? I’m all for it. Following, liking it and stalking their page. Well done, Tami.

This article was originally published on July 2, 2019.