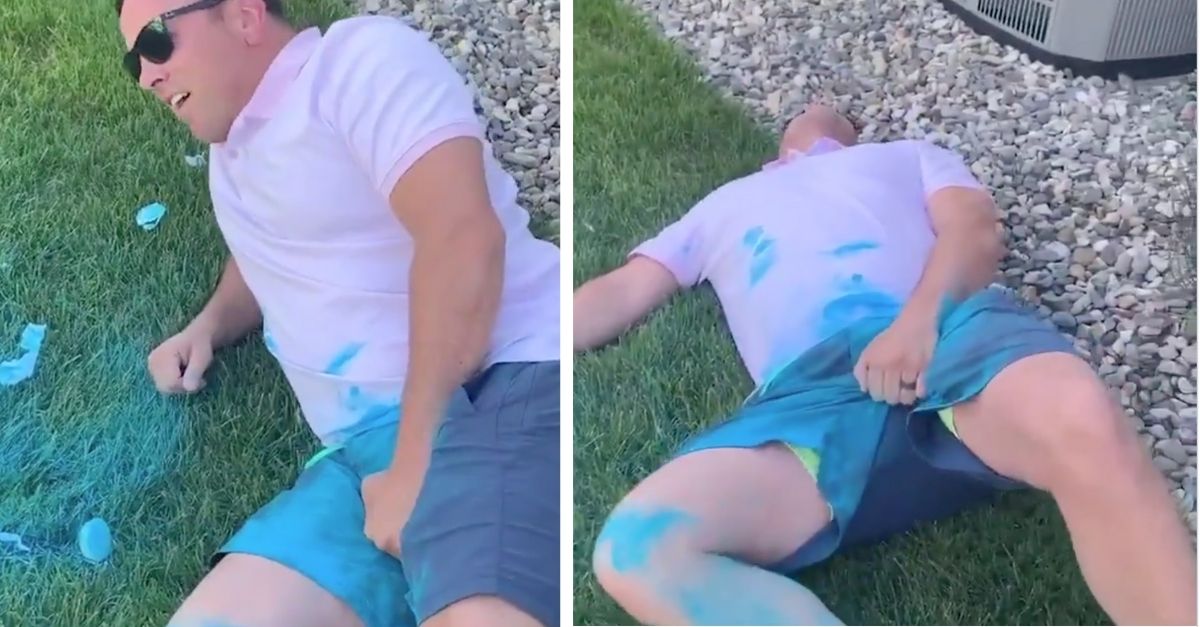 Hey people, did we learn nothing about the recent wildfires that are occurring in California after the trending yet dangerous gender reveal party went insanely wrong? Don’t get me wrong I love a good gender reveal party. Who doesn’t like eating a cupcake and then finding out their gender by the frosting that’s inside? Or you know, opening an envelope and seeing if it says girl or boy with a note written by your doctor? They are simple, effective, and most importantly do not cause any harm.

In this case, this father might not have to worry about planning any more gender reveals in the future, because well, we aren’t sure if his crotch is okay or not. A viral video shows the very hilarious and brutal moment a Massachusetts dad fired a canister of blue powder straight into his penis during a gender reveal party. It doesn’t get better than this folks. The universe is still angry at the previous gender reveal that it decided to take it out on this dad.

Well, That Didn’t Go as Planned!

Flare hits dad-to-be in the crotch at a gender reveal party pic.twitter.com/M0FsqgoRa8

The video of the mishap was shared by The Sun, showing 43-year-old Tom Cressotti kneeling over in pure agony during the bash at their east Longmeadow home. He and his wife Kristin Cressotti, 36, each set off a flare to let their friends and family know the gender of their second child. The video shows the couple, and their 4-year-old daughter Ella between them, getting ready to fire the contraptions as guest countdown from five.

But while Kristin’s flare shoots blue powder flying all over into the air indicating that the couple is expecting a boy, well, Tom quickly takes a step back and begins to fall on the floor realizing the gender reveal flare was on the incorrect way. This man is going to be the laughter of every family party after this. The dad-to-be can be seen crouching over in agony as you can see his crotch has full-on blue powder all over. Which was actually meant to shoot 30 feet away from him. Several others began to laugh as one can be heard saying “Hey, no need for a vasectomy!”

“Hey, No Need for a Vasectomy!”

1. Why are gender reveal parties a thing?
2. Why have they gotten so elaborate that they can do things like injure people and cause forest fires?
3. If you must, what's wrong with some balloons released from a box?

Meanwhile, Tom turns to his wife, telling her that she gave it to him the wrong way. Kirsten spoke with The Sun, jokingly saying, “apparently this was all my fault” adding that her husband Tom “was not permanently hurt by the accident and fully recovered within minutes. She explained that when used correctly the powder cannons should be dispersed around 20 to 30 feet into the air, not to the ground. Since Tom’s Cannon was pointed right at his private area it directly blasted at him.

The couple’s baby boy is due to be born on February 7, 2021. As far as Tom’s future baby-making abilities, well who knows maybe it wasn’t that big of a blast, but this is so silly. Take care of those family jewels, Tom. Parents let just opt for a regular gender reveal next time. We don’t need any more accidents.

Editors note: This article was originally published on September 15, 2020.

Watch: Couples Are Throwing ‘Balls Voyage’ Parties To Celebrate Getting A Vasectomy