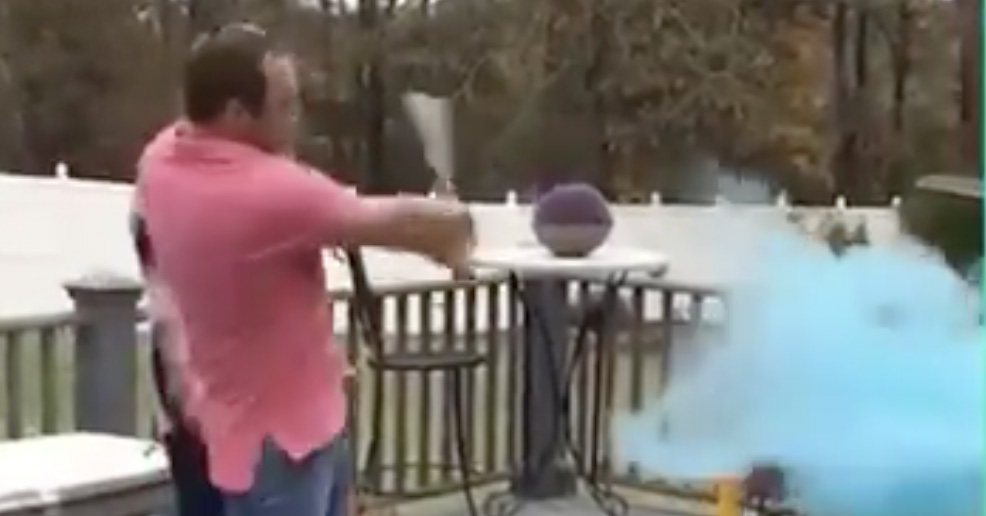 A mom-to-be was standing next to her super-good-at-sports-he-was-on-a-couple-varsity-teams-in-high-school-no-big-deal husband*, awaiting the news of their child’s gender, which would be revealed to them after the aforementioned strong and very good at sports but it’s whatever husband took a swing with his baseball bat and MASHED THE HELL out of the ball so that it would explode in a cloud colored to inform them of the baby’s sex.

(*This is all made up I have no idea if he’s actually like this.)

But things took an unexpected and unfortunate turn. The husband did indeed take his Mighty Casey-esque hack at the ball but instead of swinging and missing he made contact twice. First, with the ball, which burst into a cloud of blue dust. (It’s a boy! Congrats!) And, then, he made contact with his pregnant wife. In the face.

No word on if he called catcher’s interference.

Damn. You can straight up hear that forehead contact. Fortunately the wife was okay. No concussion or anything crazy like that, so they didn’t have to do the gender reveal again so she’d remember this time.

While this isn’t a forest fire or a man being attacked by an alligator, this is one more piece of proof that it’s probably time to retire the gender reveal. To be fair, it’s a great reason to throw a party. You can only ever be so upset with being presented an even mildly good reason to drink (unless it’s a global pandemic).

Still, there’s already baby showers and diaper parties. How many more pre-birth parties can there reasonably be? Also, the stunts to reveal the gender are getting either repetitive or out of control. I’m thinking that from now on a Facebook post or mass email will suffice. BUT YOU BCC EVERYONE. No one needs forty replies in their inbox.

Watch: This Mom Revealed the Gender of Her Baby Via a Colored Fart