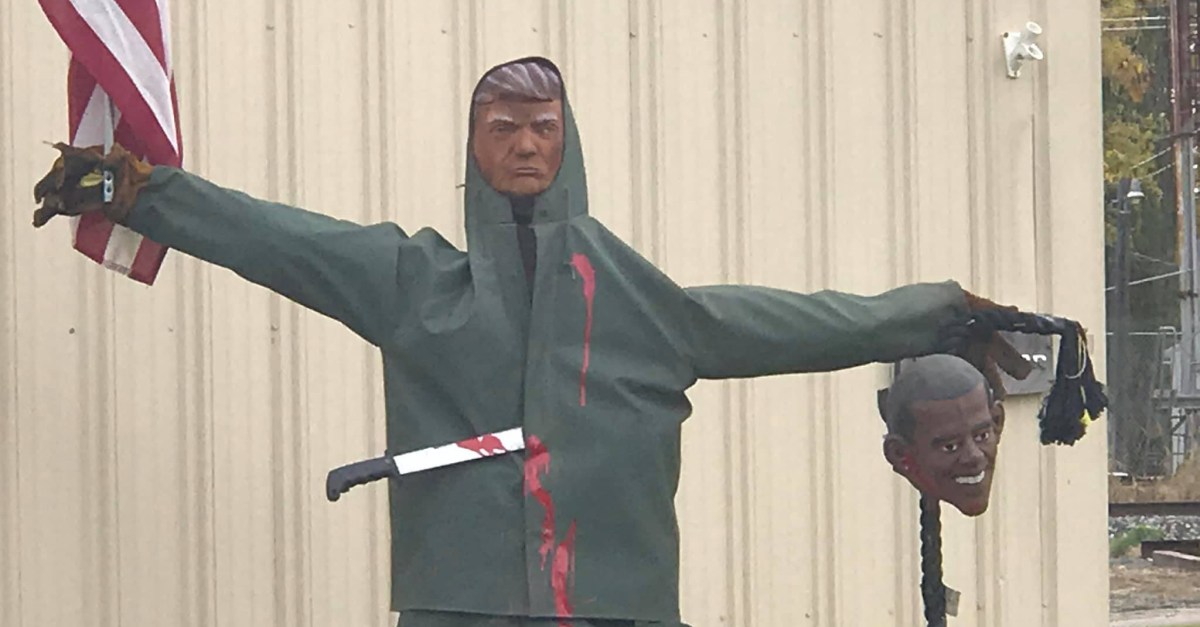 Quality Coatings auto body shop in Fowlerville, Michigan is catching heat for a controversial Halloween display that its owner Dave Huff put up outside the shop. Weird, right? Combining politics and a murder-themed holiday: what could go wrong!

A lot, it turns out, when the Halloween display in question shows President Donald Trump holding the severed head and spinal column of former President Barack Obama while standing on the severed head of former Secretary of State and presidential candidate Hillary Clinton.

Much of the controversy around the display came from the fact that Obama’s “spinal column” was made out of rope, which made it look like Trump was holding our first African-American president’s head by a rope. It’s unsurprising, then, that “lynching” was the first thing that came to pretty much everyone’s mind when they saw it. By “unsurprising” I of course mean, “100% expected.”

(It should be noted that, regardless of any explanation, this display is stupid. It was a bad idea executed horribly.)

There’s also actually no reason anyone would or should assume the dark rope was a spinal column. The only reason I know that’s what it is because I already read about it. With that in mind — as well as the fact that it is an effigy of Trump murdering Obama and exactly how he’s committing the murder doesn’t change that — it’s perfectly reasonable for everyone to assume that this is a portrayal of Trump lynching Obama.

What was infinitely less reasonable to assume is that everyone — or really anyone at all — who drove by the display would immediately recognize that Huff was attempting to portray a finishing move from the video game Mortal Kombat, as he claims.

Don’t get me wrong, I believe Huff. But only because I typically subscribe to “Hanlon’s razor,” which states, “Never attribute to malice that which is adequately explained by stupidity.” (This is related to the more well-known Occam’s razor, which broadly says that the simplest answer is usually the correct one.) I also believe Huff’s explanation because the whole display is pretty crappily slapped together, so it makes sense that the rope was supposed to be a spinal column. Plus, for the little it’s worth, Trump is also suffering from what has to be a pretty brutal machete stab wound. Clearly Obama got a few good licks in.

By the way, you can buy a spinal column candle on Amazon for basically the same price as rope, dude. Would you have still gotten in trouble for the display? Yes. Absolutely. But at least people would have been like, “There goes the idiot who put up that Trump killing Obama Mortal Kombat style Halloween decoration,” instead of, “There goes the guy who claims he’s not a frothing racist but I don’t believe him.”

All things considered this was an outrageously stupid move on Huff’s part. Maybe just, as a general rule, avoid portraying living people as having been murdered unless they’re unquestionably awful. If he hadn’t been killed a few days ago ISIS leader Abu Bakr al-Baghdadi would’ve been perfect for that decoration. And no one but the most obnoxiously sensitive would have objected to Osama bin Laden’s head being held by George W. Bush circa 2006.

It also doesn’t help that when quickly driving by the display locals couldn’t really see what was going on beyond a white guy holding a black guy’s severed head with a rope around it. This whole Halloween display was about as well thought out as a Bourbon Street penis tattoo. Thankfully, at least, Huff changed the display.