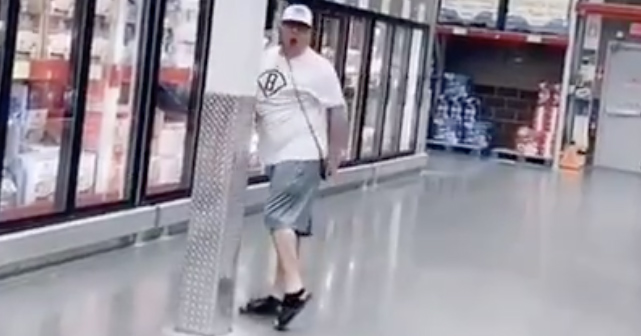 A man — a hero — filmed himself ripping a cheek clapping hurricane of a fart into the PA system at a Sam’s Club. Why? For our entertainment. To bring us joy in these trying and difficult times.

Michael Reliford took to his local Sam’s Club at the end of May to entertain his nearly 6,000 TikTok followers plus, presumably, dozens of low-level Chinese spies, by grabbing one of the PA phones and blasting off into it. Reliford’s expulsion did not disappoint, either. Just take a look and listen.

That was… perfect. Perfect. Like a perfect note played from a trumpet. Everything about that fart was masterful. The length of it was especially perfect. If it had gone on too long the fart itself would’ve overshadowed the echo, which reverberated across the high factory-style ceilings of the Sam’s Club. Nothing in that store — absolutely nothing — went untouched by the soundwaves of Reliford’s fart. Every five-gallon bucket of mayonnaise and 200-pack of Diet Mug Root Beer cans in that Sam’s Club was farted on.

The video has over 10,000 views on TikTok and over 6 million on Twitter. As well it should. It’s magical. There’s no word on what Reliford did immediately after tainting this entire warehouse but one would assume he moved calmly and quickly for the door. Would you want to get stopped and detained by Sam’s Club security after and explain what you were doing?

“Why did I fart into the PA system? Have you ever heard of TikTok? You have? Well, it’s not just for 16-year-olds. No, really I swear. Okay well, agree to disagree on that one. Anyway, yeah, I thought it would be pretty rad content for my ‘Tok and guess what? It was. I have no regrets. And quit bitching about me ruining the phone. You people sell oil drums of sanitizer just dip the receiver in one and hook it back up.”

Actually that sounds fun too.