From 1977 to 1977 The Richard Pryor Show entertained and captivated American audiences for over three entire episodes. (Four, to be exact.) If you don’t remember the glorious four week run of Richard Pryor’s primetime variety show (especially if you weren’t even alive for it) you’d be forgiven. Like one of Richard Pryor’s crack pipes, the show burned hot and fast. The sketch comedy show also so appalled the more humorless parts of America (especially TV executives) that it was canceled almost as soon as it aired. A family hour sitcom it was not. (Please someone put this on Netflix.)

Why was it canceled? Because it was exactly what you’d expect out of a Richard Pryor sketch comedy show. It was raunchy, racially charged, blunt, and breathtakingly hilarious. It was basically Chappelle’s Show but almost thirty years earlier and on primetime network TV. Who could’ve guessed that that combination wouldn’t work out for a nation whose favorite TV shows at the time were Happy Days and Laverne & Shirley? 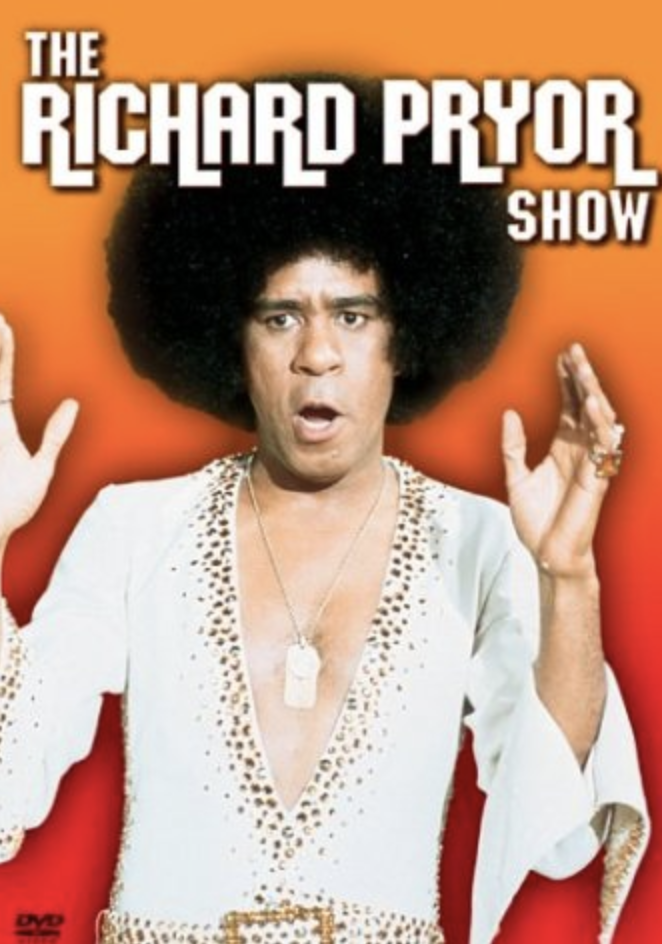 So why would Richard Pryor agree to have a TV show at all, let alone during that time slot? Well he was never anything but transparent about that. He chose the song “For the Love of Money” as the show’s theme song because that’s why he agreed to the show in the first place. To make money.

Not only was The Richard Pryor Show groundbreaking with its material, but it also featured a number of then-unknown but soon to be famous comedians and actors as cast members, including Robin Williams (in his TV debut), Sandra Bernhard, John Witherspoon, Paul Mooney, John Belushi, Maya Angelou, Edie McClurg, and Alan Thicke (as a writer).

Originally ten episodes of the skit show were ordered by NBC but Pryor and the network had endless disagreements over the show’s content, as well as the time slot. One sketch, in which Pryor played a machine gun-wielding rock star who shot all his white fans at a concert drew some pretty harsh reactions, believe it or not. Another sketch, about lesbians, also caused mass pearl-clutching and outrage. (In fact, pretty much everyone was dumbfounded as to why NBC wanted to air a show written by and starring Richard Pryor right after dinner.) After enough disagreement, Pryor walked. The legendary stand-up comedian came back and produced four episodes of the show before quitting again and never returning. The show’s four-episode run ended with the Richard Pryor special roast and that, as you can imagine, was pretty hardcore.

Right from the first episode, which featured a totally naked but genital-free (think an African-American Ken Doll) Richard Pryor, people were outraged and upset. Pryor wouldn’t have it any other way and neither would we. The show may have never gotten the chance it deserved, but we can still remember and recognize it now.

These days you can buy The Richard Pryor Show on DVD or find a lot of its sketches on YouTube.

Considering how incredibly well it holds up (better than early the early stuff that aired live from New York, even) that shouldn’t be hard. These are our favorite sketches that we found on YouTube from a show that was regretfully made well before its time.

To Kill a Mockingbird Parody

Watch: Dave Chappelle’s Car Commercial Parody is Still Hilarious After All These Years