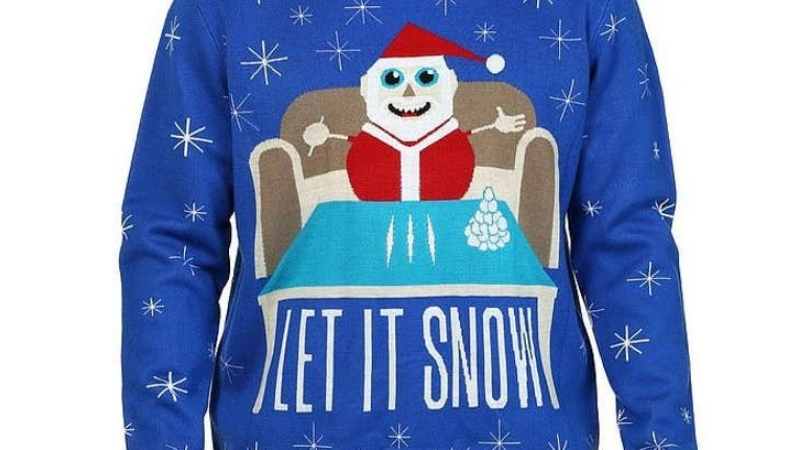 Uh, it looks like somebody mixed up their snow design. Walmart is facing heavy backlash after they released a sweater showing a highly intoxicated Santa Claus with white lines of what is presumed to be cocaine in front of him. Yes, goodbye Ho, Ho, Ho, and hello Blow, Blow, Blow.

The Walmart, which was located in Toronto, Canada, apologized for the adults-only Christmas sweater that was “considered by many to be a bad taste.” Because well, it’s Santa we’re talking about here. The sweater also contains the words Let it Snow, which appeared on Walmart’s Canadian website.

Yall. Look at this description for this Christmas sweater from Walmart pic.twitter.com/lBdmKQ1JoZ

The company stated the sweaters were sold by a third-party seller on Walmart.ca, and do not represent Walmart’s values and have no place in their stores or websites. The company has officially removed the product from its marketplace and apologized for any unintended offense that it caused.

Along with this hilarious mess, several other risque season sweaters were also taken down after social media pointed out their appropriateness. What I found even more ridiculous about this whole situation, was the description that the website had for the sweater. It read:

“We all know how snow works. It’s white, powdery, and the best snow come straight from South America. That’s bad news for Jolly Old St. Nick who lives far away in the North Pole. That’s why Santa really likes to savor the moment when he gets his hands on some quality, grade-A, Colombian snow. He packs it in perfect lines on his coffee table and then takes a big whiff to smell the high-quality aroma of the snow. It’s exactly what he needs to get inspired for Christmas Eve. This Men’s Let it Snow Ugly Christmas Sweater captions that moment when Santa is finally ready to enjoy that sweet, imported snow. It’s also warm and comfy so you can wear it anytime the snow starts blowing this holiday season!”

Yup, sounds like a great holiday sweater you should wear to your company Christmas party, that’s for sure. Oh and in case you were wondering, it is 30 percent wool and 70 percent polyester. Although this sweatshirt is very highly inappropriate, at least it’s comfy right?

Still, this is so dumb and hilarious at the same time. Some people just don’t think about their actions. I wonder what that model was thinking when they asked him to try it on?