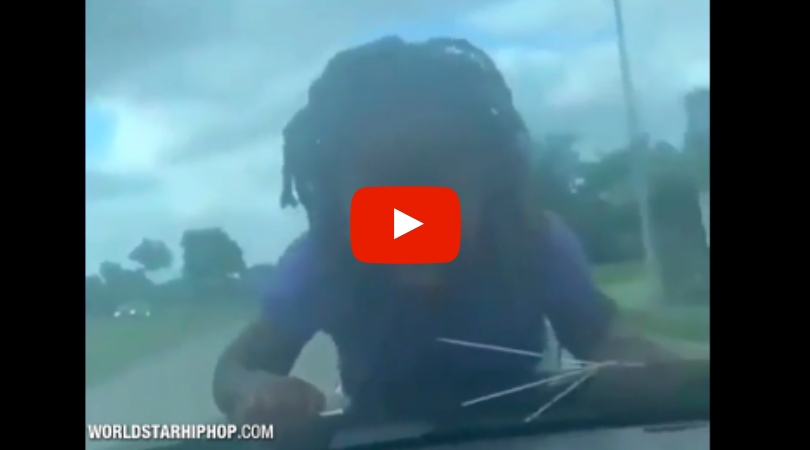 I get that many parents have their own way of disciplining their kids. Whether it’s a time out, a spank here or there, or the silent treatment, they do what they need to get them to listen. Heck, my mother used to chase us around with her sandals until we basically did what she told us to do! Don’t worry, she never hit us with them, but she was sure convincing that she would, and that was enough to scare us to the bones. That being said, no parent should take it to an extreme and actually physically hurt their child to teach them a lesson. Because well, it won’t work and nowadays, it can be considered abuse it you take it too far. Plus, the child will just block you out because of how scared he or she is.

Which is exactly what this parent did, who is probably going to go to jail once child services find him because it’s terrifying and stupid at the same time. The disturbing and idiotic video was posted to “World Star Hip Hop” with the title, “Father Drives Car With Child On His Hood As A Form of Punishment” which shows exactly that. A young girl scared to death, yelling her lungs out as she desperately tries to hold on to the hood of the car that is easily going more than the speed limit. You’re begging for a reckless endangerment and child abuse charge.

The video is only seven seconds long, but of course, it takes an instant to see why this whole situation is wrong. One small bump, or one break and this girl is sent flying to the ground and run over quickly. By either them or another driver that didn’t see her. There is still no word if the person responsible for the video has been identified, but heck, I’m sure they will be in no time.

You can run, but you can hide interwebs. Geesh, this is so irresponsible. Where is the mother? It doesn’t take a smart person to know why this is bad. Some people out there shouldn’t even be parents if this is how they are going to act. Just buy some condoms or something.

Editor’s note: This article was originally published on August 6, 2019.