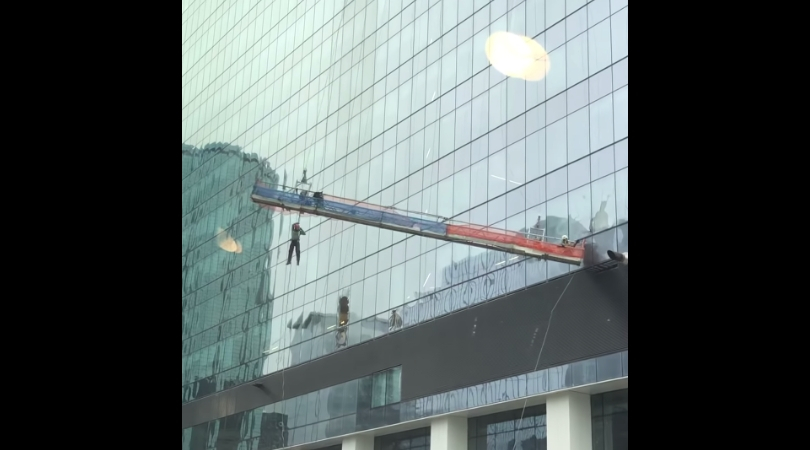 Is there anything that sounds more fun than window washing in high winds? Maybe being mauled by a circus bear or having sex with a bag of broken glass. But not much!

In all seriousness, washing windows when it’s windy as hell out sounds like a nightmare. You should get a bonus for going up on one of those things when the wind is stronger than 20 miles per hour. Or just be allowed to decline to go up. These two Canadian window washers working the Stantec Tower in Edmonton did not have either option though, so instead, they hung on for their dear lives after the wind started kicking up.

Don’t worry everyone is fine. First responders came and got the men down from the scary, windy scaffolding. So feel free to share this crazy video with your friend Dianne or all your coworkers in the breakroom. No one died. No one was impaled on a No Parking sign. Just some good, clean, momentary terror that ends with everyone okay. It’s what the internet was made for.

It is at least comforting to know that, when you see these window washers, they are tethered to what they’re standing on. Still, when you’re hanging from one of those flimsy metal bastards, swinging in the wind and wondering if your skull is going to be crushed like a grape on the sidewalk by the scaffolding you were just standing on should everything go completely south and become disconnected, even that can’t be much of a consolation. At that point you’re just hoping your family will be okay and that pictures of your brains don’t get uploaded to the dark web so that weirdos and creepy high school kids can gawk at them.