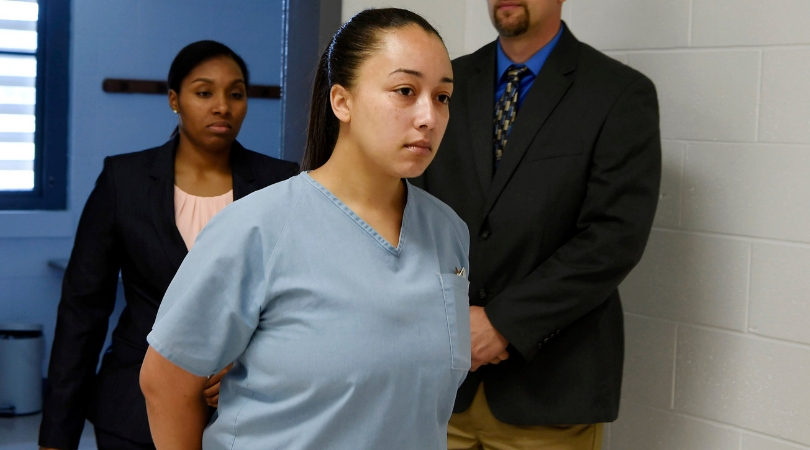 Cyntoia Brown was sentenced to life in prison for killing a man who bought her for sex when she was 16-years-old. After 15 years, her sentence was commuted by Tennessee Gov. Bill Haslam and she will be released to parole supervision on August 7th at the age of 30. Governor Haslam stated his decision to grant her clemency comes after careful consideration of how complex and tragic Brown’s case is.

Brown was convicted in 2004 for the murder of Johnny Allen, a 43-year-old real estate broker. Brown claimed she was a sex trafficking victim and afraid for her life. Prosecutors said Brown shot Allen in the head while he was sleeping, stole money and guns, took his truck, and fled the scene. Experts argued the killing wasn’t motivated by self-defense, rather by robbery. Brown was tried as an adult and convicted of murder and robbery, sentenced to life at the Tennessee Prison for Women.

I encourage and plead with my Tennessee Governor @BillHaslam to grant #Clemency4Cyntoia. Cyntoia Brown was a victim of child sex trafficking, raped and forced into paid sexual exploitation to stay alive. She deserves our empathy and your mercy.

Brown’s case gained a significant amount of attention in 2017, after several A-list celebrities, including Rihanna, Ashley Judd, Kim Kardashian West, Amy Schumer, and more called for her release. She was also a subject of a documentary released in 2011 called “Me Facing Life: Cyntoia’s Story.”

Court documents stated Brown described being forced into prostitution at a young age, sex-trafficked and raped repeatedly. Brown recounted her alleged pimp in the documentary, saying the first time her he hurt her was when he choked her until she passed out. She recalled, “I made him money…he wasn’t going to let me go nowhere. He told me he’d kill me.”

Tennessee governor grants clemency to Cyntoia Brown, a woman sentenced to life after killing the man who bought her for sex at age 16 https://t.co/0bVfZaGVec pic.twitter.com/GTaCOKb2Hc

The Tennessee Governor released a statement on his decision.

“Cyntoia Brown committed, by her own admission, a horrific crime at the age of 16. Yet, imposing a life sentence on a juvenile that would require her to serve at least 51 years before even being eligible for parole consideration is too harsh, especially in light of the extraordinary steps Ms. Brown has taken to rebuild her life.”

During her time in prison, Brown was able to get her GED, received her associate degree from Lipscomb University in 2015, and is now working toward her Bachelor’s Degree while in prison. The decision to grant Brown with clemency is one of the final acts of the outgoing Republican Governor.

Brown wrote a letter to Haslam, thanking him for his “act of mercy” and giving her a second chance. She said she is committed to living the rest of her life to helping others