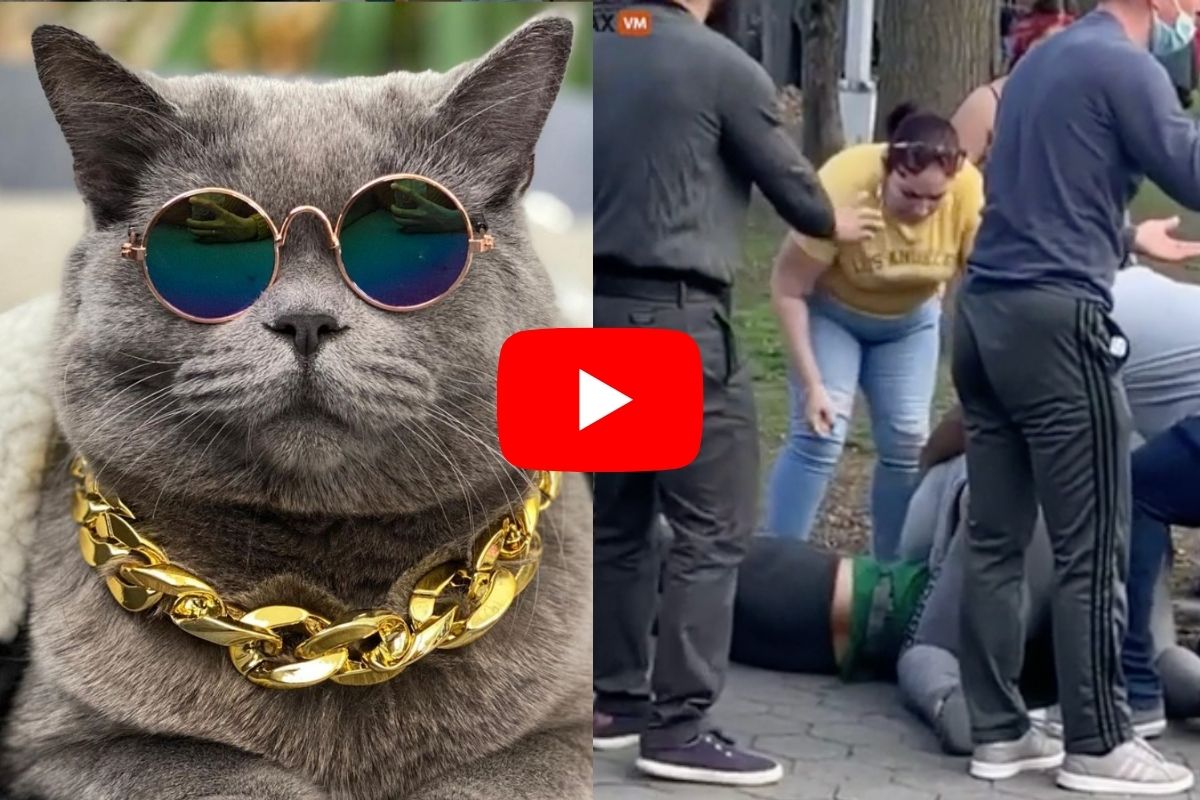 Earlier this month, I saw an adorable grey cat in a stroller in Brooklyn. The owners also had a Shiba Inu in tow and a parrot perched atop one of their shoulders. The eccentric animal trio was hard not to stare at while passing by; you got the sense they were New York neighborhood fixtures. The image stuck with me (see below). But now that cat is dead. And apparently his name was Ponzu. He had a devoted social media following but passed, suddenly, on Easter Sunday in McCarren Park in a devastating incident that set off a massive brawl.

Here, the Instagram star cat Ponzu is tucked away safely in his stroller. You can see that same stroller in the brawl video below, on the day of Ponzu’s death — just a day after this happy photo was taken.

This Instagram famous cat, seen above celebrating New Years with his birdie buddy, was named Ponzu. The 3-year-old cat was something of a kitty Kardashian, boasting more than 33,000 online followers. Along with his dog and bird siblings, this grey tabby the light of his owner’s life. Ponzu lived a colorful existence alongside his best friends: Mango the parrot, Tofu the dog, and more recently, another cat named Kimchi.

But a springtime stroll through an NYC park proved fatal for the unique feline. Ponzu was killed after a nearby boy accidentally tripped over the cat’s leash, according to police officers. His owner Chanan Aksornnan shared news about the death of her “beloved boy” on Instagram, addressed to “Dear Friends”:

“We are traumatized, lost for words, heartbroken. Our family got physically assaulted that day and there is a pending police investigation to find and charge the perpetrators who showed no empathy for animals nor humans.”

According to Nexstar Media Wire, Ponzu died at the scene. Aksornnan says he succumbed to “shock and injuries” from that physical interaction which quickly turned into a much larger confrontation…

Family of 8 killed cat, assaulted Asian female owner and her dog; NYC police impedes the case, rejects witness testimony and threatens to put victim in jail if she continues to seek justice from PublicFreakout

Aksornnan, her boyfriend, and their pets were walking through McCarren Park on April 4 when a boy tripped on Ponzu’s leash, fatally injuring the famous cat. Aksornnan told Greenpointers that the party with the boy ?did not offer any apology nor remorse? — instead the child’s family picked a bigger fight.

What erupted next was a messy park brawl that resulted in further injuries. As insults flew, Aksornnan was punched and kicked by three different women. Her boyfriend’s nose and glasses were also broken. Bits of the attackers’ rants are audible in the gnarly footage above, including the line: “That’s why you got no kids.”

Following the piled on physical assault, the NYPD arrested one Greenpoint woman, Evelyn Serrano, after she fled the scene; her relationship to the boy who tripped on the leash remains unknown.

Due to resultant medical bills and eventual legal expenses — Aksornnan plans to press charges — a GoFundMe has the news of Ponzu’s death has continued trending. The grieving Aksornnan has already raised $70 thousand. RIP Ponzu.