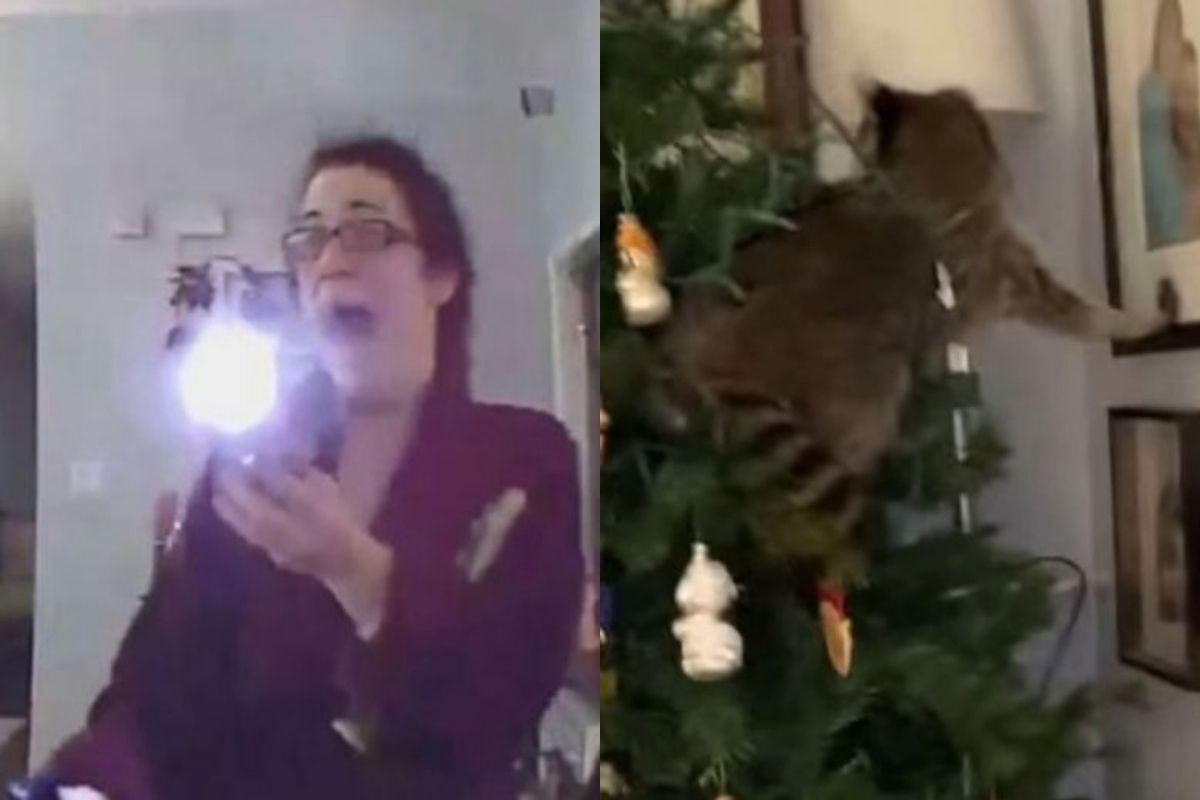 Oh man, this is one of the funniest things I have ever seen in my life. Picture this, imagine waking up at 4 a.m. to a noise in your living room, only to notice that your Christmas tree is moving. You look around and see that your dog is right next to you, so there’s obviously something else inside it. You think, ‘it’s a cat, let me get a broom’ and poke around it so it can leave. But then, upon further inspection, you realize that it’s something else. A dog, a squirrel, Santa, a bird? Nope, a raccoon. This is exactly what happened to Aubrey Iacobelli when she was awoken at 4 a.m. by her dogs barking. She thought a cat had somehow entered her home and climbed inside the Christmas tree.

What I love about this whole situation is that she decided to record it, because well why not. She posted the video on social media showing the chaos that went down in her Tallahassee home. The caption reads, ?An early surprise waiting for me in the Christmas tree this morning.? And boy was it a messy messy surprise. The video starts with the Florida woman asking Alexa to turn on the lights realizing the animal is inside of her fully decorated tree. She then states, ?there’s a cat inside my tree,? as she unsuccessfully pokes at the branches with a frying pan. A few minutes later she realizes that the cat is in fact not a cat, rather it’s a raccoon hiding in the tree and it’s basically not going anywhere since it’s not moving.

She then calmly said, ?this is bad,? which is also hilarious because I would be yelling my lungs out if I was her. I have to give her props because she handled this like a champ. Give her a Most Valuable Player award now. So as she keeps on trying to remove the raccoon, the video shows her dog lunging at the unwanted visitor causing the tree to fall down as Iacobelli shrieks and the dog and the raccoon go at it on the floor. The dog is visibly fighting the raccoon and you can hear the cries from both parts.

But the raccoon stands its ground, climbing a table and then scrambling up to a chandelier, swinging, while he keeps an eye on the dog that is waiting for him. The woman then grabs a broom to get it down from the light fixture and begins chasing the raccoon around her living room. At this point it’s around 5 a.m. to which she notes, ?and that was my Thursday morning,” adding that her pup was indeed okay and unharmed. Eventually, the raccoon escaped through the doggy door that he used in the first place to enter the home. I mean, what a wild ride, huh? I feel for this woman. At least nobody got hurt and at least it wasn’t an alligator. Because at this point, I believe it can happen. Stay safe out there, Florida!