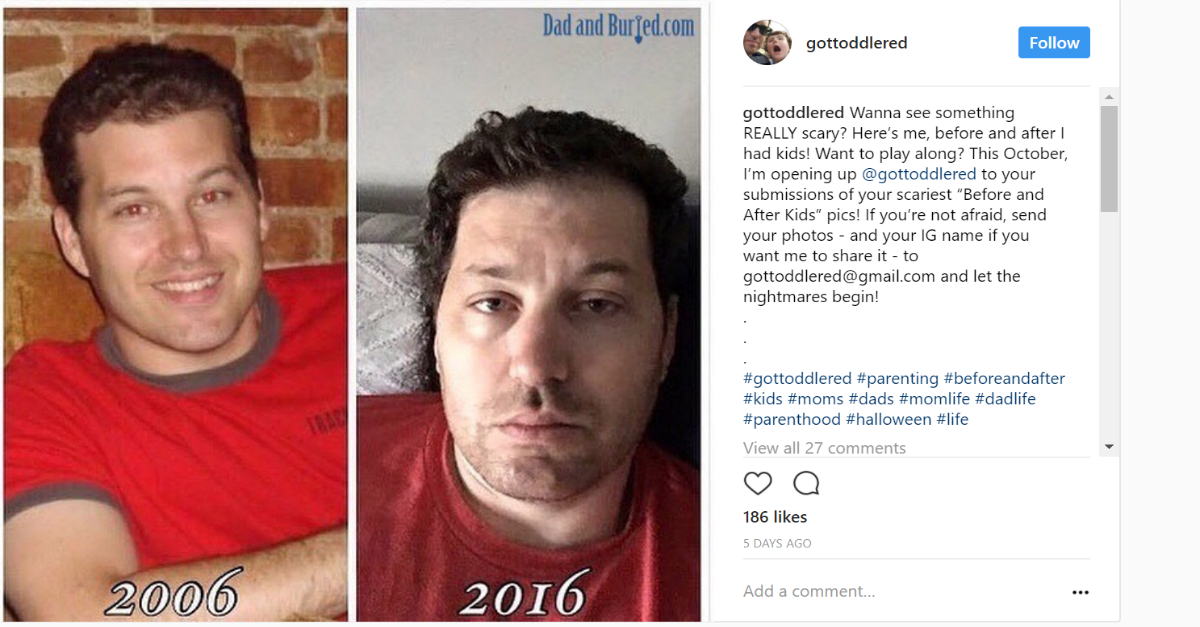 A dad’s Instagram call to arms is proving that having kids takes a major toll on your physical appearance. One day you’re a young, vibrant human being skipping through life as if you could do anything in the world, the next thing you know you’re literally elbow deep in crap, your gray hairs have multiplied exponentially, and your exhaustion is only matched by your inability to satiate it.

Mike Julianelle — the operator of the humorous parental-advice Facebook page Dad and Buried — also has an Instagram account called Got Toddlered, where he posts photos and memes of “things children have ruined.”

Unsurprisingly, having kids seems to have drastically transformed the way he looks. On Oct. 12, Julianelle posted a side-by-side photo collage of his face before and after having children. The before photo features a fresh-faced and childless young man with a glint his eye. The world is his oyster and nothing will get between him and his dreams. But a quick glance the picture on the right reveals the horrible truth.

Wanna see something REALLY scary? Here’s me, before and after I had kids! Want to play along? This October, I’m opening up @gottoddlered to your submissions of your scariest “Before and After Kids” pics! If you’re not afraid, send your photos – and your IG name if you want me to share it – to [email protected] and let the nightmares begin! . . . #gottoddlered #parenting #beforeandafter #kids #moms #dads #momlife #dadlife #parenthood #halloween #life

Eventually, other parents followed his example, and the side-by-side before and after photos came rolling in. They all tell a similar tale. Eyes with less light in them and bags now under them. A life fuller in some respects – of love and diapers, though not so much of sleep — but emptier in others (time, money).

“You can be anything you want,” the guidance counselor lied the day that first picture was taken.

The “Before and After Kids” entries are really starting to pile up and omg they are hilarious and not at all depressing! Don’t worry, @natliz6, no one can even notice the bags under your eyes… 😳 . . . #gottoddlered #parenting #beforeandafter #kids #moms #dads #momlife #dadlife #parenthood #halloween #life

The important thing here is that she’s still happy. Presumably all these people are still happy, but she looks happy, and that counts for something extra. It’s impressive. Maybe she just chugged a gallon of cold brew?

Sleep is for the weak.

Just give me a beer and leave me alone.

I love this one from @mrstooman because it looks EXACTLY LIKE MINE. All bright-eyed and youthful on the left, and just straight DONE on the right. Haha. Hahahaha. 😞 Condolences all around! #BeforeAndAfterKids . . . #gottoddlered #parenting #beforeandafter #kids #moms #dads #momlife #dadlife #parenthood #halloween #life

I love my beautiful child but… Goddamn.

This story was originally published October 18, 2017.