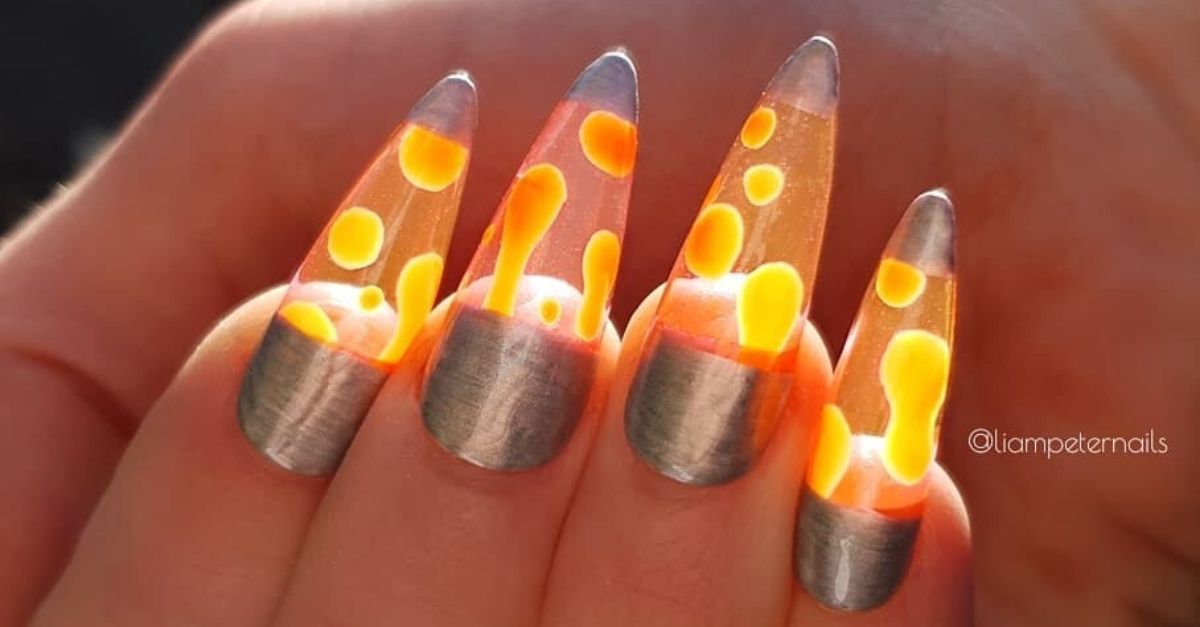 Okay, I’ll admit it, these actually, sort of, kind of look cool. I mean, who doesn’t like lava lamps, am I right? Some people love them so much that they have actually started to put them on their nails. No, not actual lava lamps, rather acrylic ones that nail artists are creating for them.

I mean, it’s obvious, we should have known that the ’60s were back as soon as we saw the bell pants making their way around the internet. I came across these nails on Liam Peter’s Instagram, who is a nail artist. The trend takes the stiletto shaped nail, transforming them into miniature lava lamps.

Lava lamp nails!! Let's start a trend! #lavalampnails Have wanted to do something like this for like a year and finally did it using @the_gelbottle_inc 'Cosmopolitan' and 'Bellini'. My inspiration was very much re sparked by @yaaas_get_nailed who recently did some hot af aquarium nails. They do hot stuff. P.s no filter I promise. Just sunlight! #nails #nailart #notd #nailartist #tgb #thegelbottle #pressonnails #liampeternails #lavalamp #jellynails #jelly #almondnails #gel #gelnails #nailtech #hiddengems

Through Instagram, the artist stated he created the look by using The GelBottle INC. gel nail polish in Cosmopolitan, a sheer and bright pink color, and Bellini which is a light orange shade. Speaking with Allure, he stated, “Layering jelly and neon gel polishes gives depth and makes it seem as though the blobs are really flowing around. The real star, though, is the sunlight. Just like with holographic effects, these come alive when the sun hits the nail.”

The trend is definitely not new since it began in 2015, but it’s making its way around 2020 because well, let’s face it, they look pretty rad. Several have called the lava lamp nails a “moving nail trend” since the liquid inside the actual nail inside moves. The bubbles inside the lamp, which are colored, swim in a clear fluid.

Ever since I saw @liampeternails Lava lamp nails on here (swipe to see inspo) I wanted to recreate them as they looked so awesome. There are no filters on my pics or editing it’s just sunshine. • Tutorial over on my YouTube channel Gelulicious. • What do you think about these nails? Yah or Nay? • • #gelulicious #lavalampnails #nails #nailart #naildesign #youtuber #cool ailideas #lavalampmani #nailinspiration #nailtutorial #notd #nailartist #gelnails #clearnails #howtonails

Apparently, this is done by sticking two nail tips on top of each other and then injecting baby oil between them with a syringe to create the illusion of floating water. Yes, insane but so so cool. So, all you have to do is then inject colors blobs and boom, you have yourself a groovy nail.

These nail designs are getting so wild, but I am all for it!

Watch: Bride Puts Dad’s Ashes In Nails So He Can ‘Walk Her Down the Aisle’